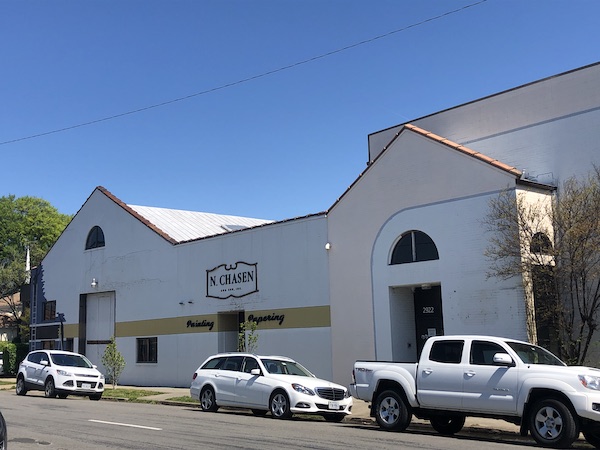 A busy developer in Scott’s Addition is teaming up with the folks that own the Washington Nationals to bring hundreds more apartment units to the neighborhood.

Locally based Capital Square is under contract to purchase the N. Chasen & Son building at 2924 W. Marshall St. as well as some surrounding parking lots, all totaling about 2.25 acres.

“Lerner found us. They were looking for a local development group to partner with and formulate this project,” Stifel said.

Lerner did not respond to requests for comment by press time.

As the neighborhood gained steam in recent years, the company continued operating on West Marshall Street. Eventually, it began getting unsolicited offers on its land from developers.

“We really had no desire to leave or a specific need to leave,” Chasen said, citing rising property taxes as part of the reason why it ultimately listed its land for sale.

“We asked (Johannas) to basically put together marketing materials that would help prospective buyers visualize the opportunity,” Deffenbaugh said. They hired CBRE’s Matt Hamilton, Chris Wallace and Jason Hetherington to represent the company in sale negotiations. 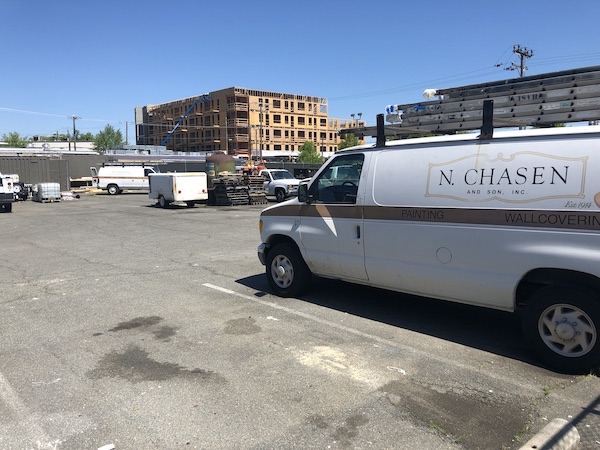 The painting and contracting firm’s holdings include parking lots behind the warehouse on West Marshall. Pictured under construction in the distance is part of Capital Square’s Scott’s Collection, a trio of apartment buildings.

Deffenbaugh said the deal with Capital Square and Lerner’s will include 2.25 of the 2.5 acres N. Chasen & Son owns, with the seller holding onto 2939 W. Clay St., which it leases to restaurant Longoven.

Stifel at Capital Square said the redevelopment of the site will be roughly the same size as the one Capital Square’s working on with Greystar at 1601 Roseneath Road.

“It’ll be about 350 units,” Stifel said. “There’ll be some retail as needed but it’s mostly residential.”

He added that it’ll likely reach five stories with apartments above a one- or two-level parking deck.

Costs for the project and land acquisition were not disclosed, and Stifel said they’re still looking into how they intend to finance the project. He said they’re scheduled to close on the land sometime this year.

While the project looks to be Lerner’s first in the Richmond region, it’s the latest in a string of developments Capital Square is working on in Scott’s Addition in addition to the aforementioned Greystar development.

The company is also under contract to purchase the Hutcheson & Co. building at 3015 W. Leigh St., where it’s considering renovating the building into a food hall. It also has ground moving on Scott’s Collection, a trio of buildings that will bring a total of 212 apartments to the neighborhood.

Chasen, meanwhile, is preparing to find the next home for his family’s business. He said they’re open to looking in both the city and the surrounding counties.

“Most of our customers are in and around Richmond, so being central to our customers is probably the most important part of a new location,” Chasen said.

“Other than that, we’re not that fancy. We’re a painting and carpentry contractor. We need a lot of parking for our employees and a decent-sized warehouse.”

This sounds like a win/win for N Chasen and Scotts Addition. It’s always unfortunate to see an employer relocate, but at the end of the day Chasen gets a great opportunity to cash in on their prime real estate while reimagining their business operation and the layout of their space.

Fascinating, I wonder if Capital square is still doing 1031 as a source of capital?

Hunderds of trees and Deer and turtle space were not harmed in the building of this apartment complex when a empty surface parking lot was ripped up.

I understand this is good business for Chasen, but Scott’s addition is losing character and becoming a refuge for boring and outdated Soviet era apartment design. Glad we sold our building there, traffic and parking was getting annoying!

Am I the only one that sees the irony in this post?

Losing “character?” Well, I suppose if empty warehouses or former industrial buildings and a sea of surface parking lots is your idea of “character.” (I can’t roll my eyes hard enough at this, quite honestly.)

Thankfully, Scott’s Addition is becoming a great urban core neighborhood. It’s thrilling to see project after project rise and more and more new residents move in. The vitality of this neighborhood is only increasing. May it continue!

some of the architecture could be better, but Scott’s addition is still gaining character, not losing it.

There is no traffic. Still. And parking is still not bad. Though it will indeed get bad.

And yes, I own property in Scott’s Addition. And live nearby

Scott’s Addition and the new nearby development next to UMFS on Broad Street are designed for a transient population segment. The construction consists almost exclusively of one-bedroom apartment buildings for the twenty-something crowd. How many of these folks will still be living there just a few years from now? Most will probably move on after the appeal wears off. Richmond needs more residents who will put down roots and strengthen the community. We need more families and houses in the city.

With the value of land and especially with the scarcity of undeveloped property in the City where do you think more “houses” can be built to meet the demand? A good number of apartment buildings in the Fan used to house 1-2 bedroom units, but were converted for duplexes. triplexes and condos. So, the “kids” in Scotts Addition can actually help feed a continued improvement of the housing stock in the Fan and other areas of the City once they leave the nest. Same way Manchester can help feed the continued improvement of housing stock in the South Richmond areas… Read more »

I pretty much completely disagree with this. It’s a city. Not a suburb. It arguably has too many houses. And renters of one bedrooms are the city residents with roots of the future.