Scott’s Addition is set to get another major mixed-use project after an entire city block in the neighborhood changed hands last week.

Greystar, a South Carolina-based developer, paid $8.6 million for the 2.4-acre parcel at 1601 Roseneath Road, where it is planning a five-story, mixed-use building featuring 350 apartments and 10,000 square feet of ground-floor retail space. Local real estate firm Capital Square 1031 is the co-developer on the project.

The block is bounded by MacTavish Avenue, Roseneath Road, and West Moore and Norfolk streets. Five different industrial buildings sit on the site, including the warehouse for now-defunct grocer Relay Foods.

The deal closed Dec. 16, and a city assessment most recently assessed the land at $2.75 million. 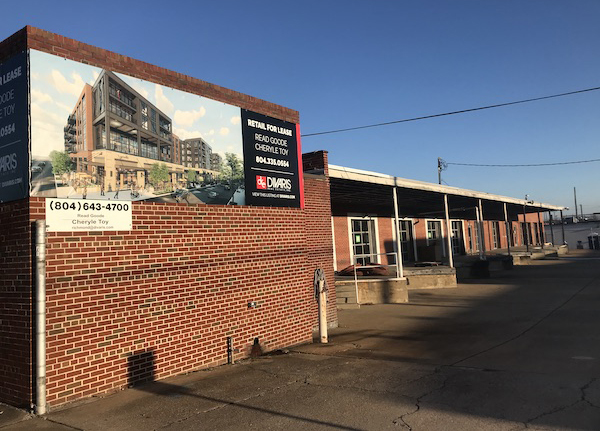 A rendering of the planned development is already displayed on the 2.4-acre property at 1601 Roseneath Road. (Mike Platania photo)

The seller in the deal was an entity tied to Andrew R. Little of Midlothian, which bought the property in 2011 for $1.9 million, city property records show. Divaris Real Estate’s Read Goode and Cheryle Toy are representing Greystar in leasing the development’s commercial space.

The project has been in the works since at least last fall, and earlier this month Greystar began filing building permits. Greystar did not respond to requests for comment by press time.

Per its website, Greystar’s only other holdings in the area are the Everleigh and Avia apartments and in Short Pump.

The Greystar deal closed on the same day that VCU finalized its purchase of more land in the greater Scott’s Addition area. Last week, VCU purchased 2601 Hermitage Road, a parcel of land where it’s planning its future athletics village.

Street-facing retail, decent architecture, and a significant number of units? Impressive compared to what we usually get in Richmond

Great, another 5 story apartment block! Seriously though, why are they all around 5 stories?

Just curious, has anyone kept track of how many new apartment buildings and units are slated for construction in Scotts Edition and Richmond during the next five years? It literally seems like every other day a 150 unit project is announced. I know that the Richmond apartment market is red hot but seems like all these new projects might test how hot it really is.

If they build too much, that’s good for the consumer. Rising rental vacancy rate puts downward pressure on rent

Calling all visionary and progressive architects. Please save our city from this stick-frame homogeneity. 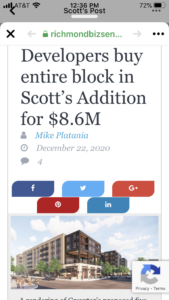