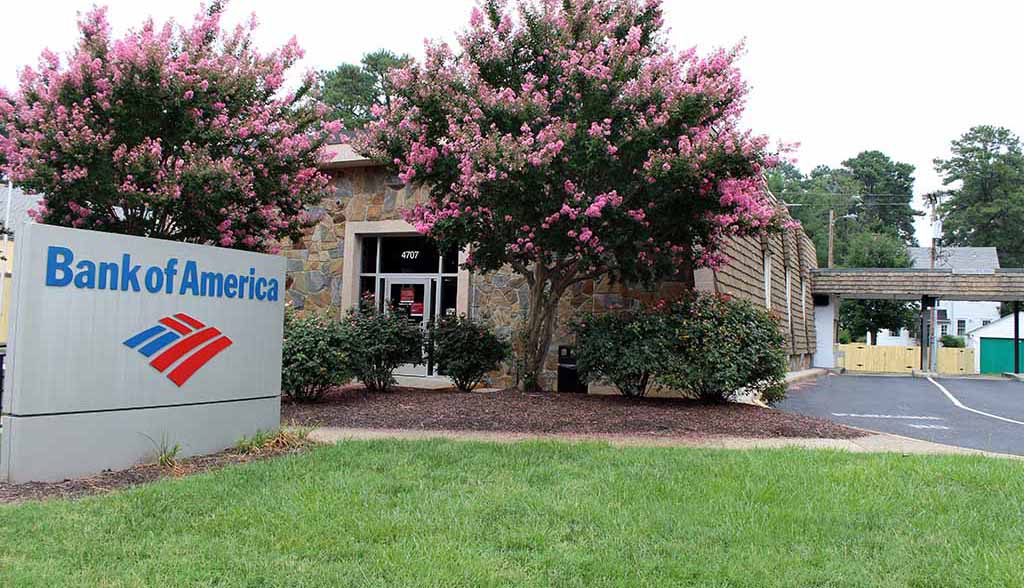 The Bank of America branch at 4707 Forest Hill Ave. is slated for permanent closure in September. (BizSense file)

A national banking giant is doing some branch trimming on Richmond’s Southside.

Bank of America plans to permanently shutter its location at 4707 Forest Hill Ave. in late September.

The bank initially closed the branch on what was announced as a temporary basis when the pandemic began, but has now decided to make the closure permanent, a spokesman confirmed.

The ATM onsite will remain operational for 18 months following the closure. Bank of America owns the Forest Hill property. It did not say what it will do with the real estate going forward.

The bank said the closure is part of its continued efforts to monitor the performance of its retail branches as mobile and online banking become more prevalent and to close those that are seeing a decline in foot traffic.

“Prior to 2020, more and more people were moving to digital channels for their day-to-day financial needs, such as traditional transactions, while preferring to visit bank branches for more significant needs,” the bank said in a prepared statement.

It said its 66 million clients use its digital services 9 billion times per year and 84 percent of deposits are now made through automated channels. Nearly 70 percent of its mortgage applications and 74 percent of auto loans are submitted digitally.

“The pandemic sped up these shifts in client behavior across the industry,” it said. “The Forest Hill Avenue center is one where we saw fewer visits prior to the pandemic.”

The Forest Hill branch held $66.8 million in deposits as of June 30, 2020, the most recent figures available from the FDIC. That makes it among the bank’s smallest branches in the region by deposits. Only two of its other 20 branches have less in deposits: 101 E. City Point Road in Hopewell and 6563 Mechanicsville Turnpike in Hanover County.

It said employees of the Forest Hill location have been working at other nearby locations.

“We remain committed to this community,” the bank said.

The bank also remains a powerhouse of retail banking in the region, controlling $23.8 billion in local deposits. That’s equal to about 45 percent of the local market share, according to the most recent FDIC statistics.

And it’s more than double its nearest competitor, Truist (the rebranded SunTrust and BB&T) and Wells Fargo, which each control about 7 percent of the local deposit market.

BofA’s other most recent Richmond-area branch closure came in late 2019, at its Stonebridge location at 7203 Midlothian Turnpike.

Another of its previously shuttered area branches is in line for a reinvention, as the bank has helped facilitate a transfer of its former Highland Park location to a nonprofit. An RFP to redevelop the building is out for bid.

And the massive multi-building complex which the bank leases at 8011 Villa Park Drive in Henrico recently came under new ownership following a $208 million deal.

I’m excited to think about what this space could be used for. I’m hoping not another bank. I’m sure many disagree, and nothing against BofA, but I would love to see a reinvention of the space.