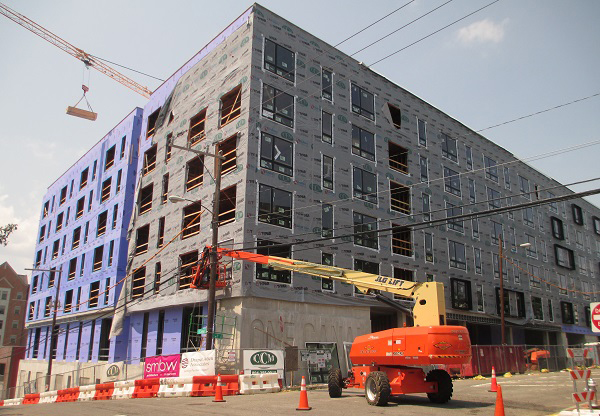 Construction has passed the midway point on the One Canal building, viewed here from Canal Street at its intersection with First Street. (Jonathan Spiers photos)

The latest addition to a row of apartment buildings lining Canal Street in Monroe Ward is taking shape alongside the Downtown Expressway.

Construction has passed the midway point on One Canal, a seven-story, 138-unit building that’s rising at the northeast corner of Canal and South First streets.

The $35 million project from Bank Street Advisors fills a gap between apartment buildings that have risen on that stretch of Canal over the past decade, including Monument Cos.’ 47-unit Matrix Midtown apartments and the 160-unit 8 1/2 Canal Street student housing complex.

The structure also looms beside Triple Crossing Brewing’s original brewery, and a two-story office building at Canal and Foushee Street that was renovated in recent years.

One Canal will be a mix of one- and two-bedroom apartments above structured parking and lower-floor commercial spaces. SMBW designed the building, and Commonwealth Construction Management is the contractor. 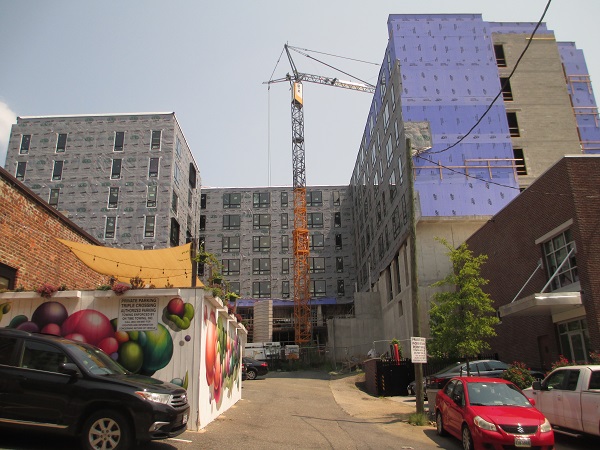 The seven-story building looms beside the Triple Crossing Brewing deck and a two-story office building on Foushee Street.

Construction started in June 2020 and Bank Street principal Ed Brown said the project is on schedule to wrap up next March.

Brown said One Canal has benefited from having been in the works before COVID-19 began impacting supply chains and availability of materials.

“Our timing on the project worked very well, because we were for the most part pre-pandemic, and most of the material contracts were pre-pandemic,” he said. “CCM, the contractor, has done a phenomenal job of managing all the pitfalls and various problems from the pandemic. Our suppliers have been able to maintain our needs to date, knock on wood. Overall, we’ve not had any major problems.”

Brown said rental rates have yet to be set for the apartments, which will average 685 square feet in size.

“The market has been so strong and the rebound has been better than most people have thought, so we’re just going to wait and try to determine that as it gets closer,” he said. 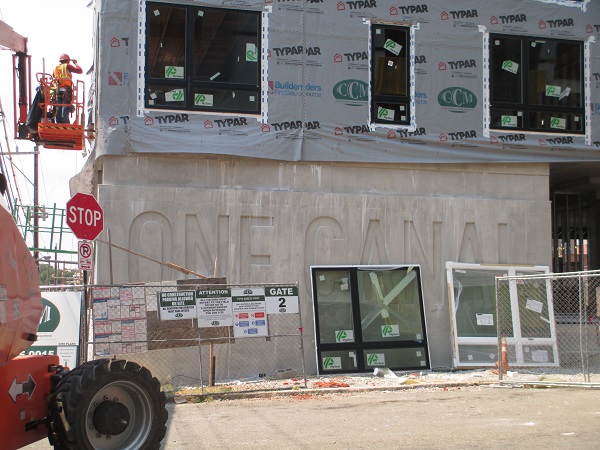 One Canal signage on the building’s concrete podium base.

The podium-style structure will have nine apartments on the first two levels, which will also include commercial space and structured parking. The remaining 129 apartments will fill the higher floors.

The commercial space will total 2,500 square feet. Brown said he’s had preliminary conversations with potential tenants but hasn’t lined up a lease.

One Canal is the latest development in the neighborhood for Bank Street, which also redeveloped a pair of nearby office buildings at 1 W. Cary St. into 17 apartments.

Of One Canal, Brown said, “It’s been nice to complement that neighborhood. We like that area, and the views are spectacular. It’s part of the midtown skyline now, so it’s been a fun project.”

Next up for Bank Street is its Soda Flats project, a seven-story building with apartments and ground-floor retail at 2820 W. Broad St. in Scott’s Addition. Brown said construction on that building, which will rise next door to the Hofheimer Building, is set to start in August.

I live nearby and have been watching the build-out. It look like it will be a neat, architecturally interesting addition to the neighborhood. Any renderings of what the finished project should look like?

There are some on the architect’s site:
https://www.smbw.com/project/one-canal/