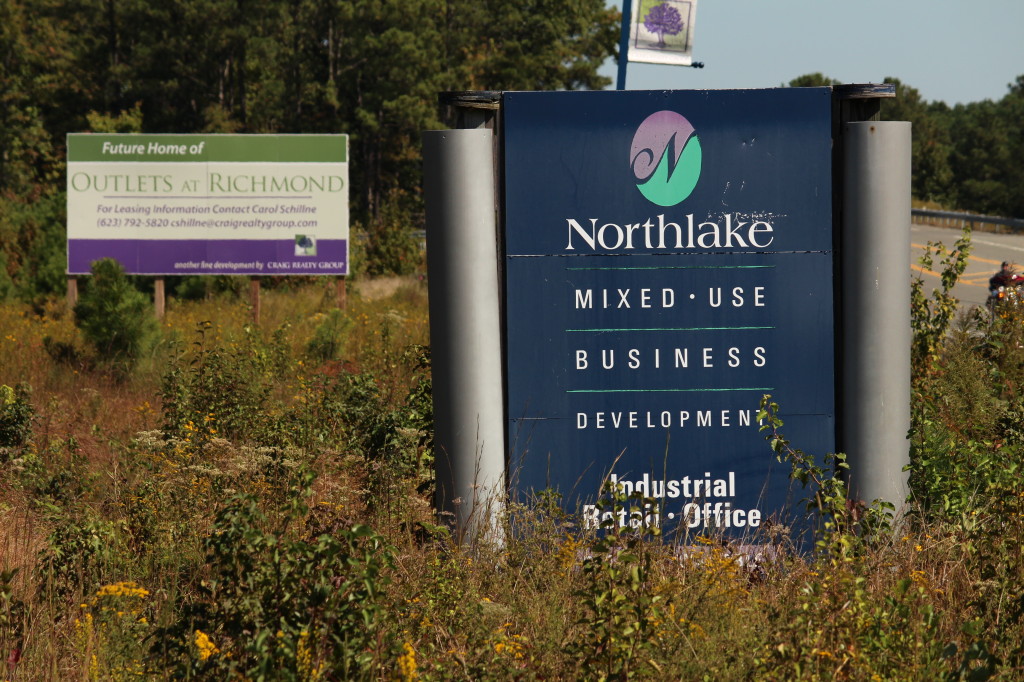 The Outlets at Richmond are planned for the upcoming Northlake development. Photos by Burl Rolett.

The Outlets at Richmond, a project that has been delayed for about a year, is nearly ready to rise following a deal that gives the mall’s developer some needed extra land. And in turn, the agreement will give a nearby manufacturing firm a chance for a larger facility.

The mall’s developer, California-based Craig Realty, has about 15 percent of the planned 350,000-square-foot mall leased and is targeting a summer 2015 groundbreaking.

The company will break ground when the mall is 50 percent leased, Craig said. He couldn’t give an estimate for construction costs on the Outlets at Richmond, but he said malls of this size typically total about $75 million.

But to get there, Craig first had to cut a deal with Lutron Electronics, a company that has a manufacturing plant at 11520 Sun Shade Lane.

Lutron is giving Craig Realty a four-acre parcel just north of the outlet mall site that the developer will use for overflow parking. In exchange, Craig Realty will transfer about six acres of a 12-acre plot it owns just north of the Lutron building. The transfers haven’t yet closed, according to county records.

Lutron will add about 40,000 square feet onto its existing building after the land exchange. And Craig Realty will build about four acres of surface parking and parking decks, pushing the mall’s total parking capacity to nearly 2,500 cars.

The outlets, according to a company site plan, will consist of four strip mall-type buildings. Two of those line the outside of the mall while the other two are bent inward, creating a nearly sealed-off courtyard at their center.

The plans call for roughly 349,000 square feet of leasable space in total. The site map shows about 75 total retail stalls, but Craig said that number may vary in the final product. Craig could not name any tenants that have signed on so far, saying that disclosing the names could void the leases.

The most common brands at Craig’s operating outlets around the country are Nike, Coach, Gap, Guess and Tommy Hilfiger. Each of those retailers has a shop in at least half of the about 10 outlets Craig owns between California, Arizona, Texas, Colorado, Utah and Mississippi.

Site plans for the Hanover mall have been reviewed once by county departments and the Virginia Department of Transportation officials and sent back to the developer and engineer for modifications. Zoning is in place for the project, and the plans will not need approval from Hanover’s Planning Commission or Board of Supervisors.

A Hanover outlet mall is a long time coming. Washington-based Water Street Development looked at building a mall in Winding Brook, just to the south of Northlake, but pulled out of the deal in 2009.

Craig Realty picked up the Winding Brook plan where Water Street left it, but found that tenants weren’t interested in the space because it wasn’t visible from Interstate 95.

Craig then flipped the project to the northern side of Lewistown Road, and bought 43 acres of land from developer Gibson Wright’s Northlake Land Investments in 2013. That includes 27 acres that the outlets will take up, the 12 acres just north of Lutron Electronics and a handful of acres east of Lakeridge Parkway that may eventually be sold to other tenants.

The original plan was to start construction on the outlet mall in 2013. Craig said he couldn’t attribute the delay to any specific hang-ups, but said developers across the country have been taking plans more slowly in recent years.

“I think our industry in general has been much more cautious given the fact that there’s not as much growth in the United States right now,” he said. “People are really scrutinizing sites much closer.”

The outlet mall will be the latest tenant to join the Lewistown Road area. A massive Bass Pro Shops anchors Winding Brook to the south and a 52,000-square-foot Harley-Davidson dealership recently opened at Northlake.

Blue Bell Creameries is working on a new distribution center in Northlake as well, and the complex is actively marketing an outparcel for a brewery.

Edwin Gaskin, head of Hanover Economic Development, could not offer any more specifics on the outlets, but acknowledged the site plan and said the county is looking forward to seeing the project come together.

“We’re enthusiastic for it to launch and are very excited about not only that particular investment, but the many others that are anticipating following it,” he said.