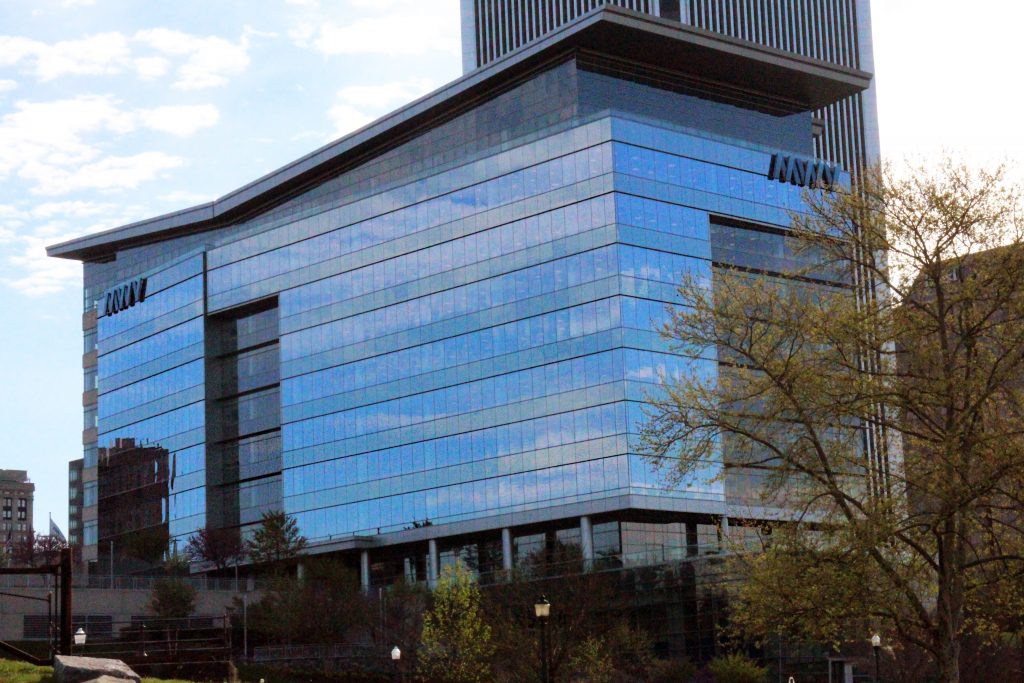 The building briefly held on to the MWV signage after the WestRock deal closed. Photo by Jonathan Spiers.

As its primary tenant consolidates space, some prime riverfront office space has become available in one of downtown Richmond’s newer office towers.

The top two floors of the WestRock Co. building at 501 S. Fifth St. have hit the market for sublease. Colliers International is handling the listing, which totals about 64,000 rentable square feet of space.

Its availability comes less than a year after the merger that formed WestRock last summer, between packaging giants MeadWestvaco and Georgia-based Rock-Tenn Co. The new company maintained its headquarters in the building, which had served as MWV’s home base for five years, though it did not replace signage that was taken down last fall.

While no major layoffs have been announced as a result of the deal, the company has previously said it relocated some executives and other employees to its Atlanta offices. WestRock spokesman Tucker McNeil said the company is consolidating space in the tower due to its workforce decreasing since before the merger.

“We’re leasing it because we’ve got the space available and it makes sense,” he said. “It’s really something that started before our merger and continued after, in terms of having available space and making a decision to consolidate onto fewer floors.

“Obviously there are fewer people working in this building, going back a couple of years now. We’ve had some folks leave, and some folks have left since the merger as well. It’s just been a slow burn in terms of fewer folks working in the building, and easier to consolidate onto fewer floors.”

McNeil said such moves should not be interpreted as the company downsizing or looking to move its headquarters.

“There hasn’t been a really appreciable move to Atlanta from here. I would call it a non-acute move,” McNeil said. “It’s not like the entire eighth floor just got up one day and walked out and moved to Atlanta. Consolidating is a process, so eventually, when there was enough space to consolidate and lease two floors, we decided to.”

McNeil said about 600 employees currently work in the building, down from MWV’s peak employment of about 850 in the building a few years ago. The company had 800 local employees when the merger was announced in early 2015.

As of last September, WestRock employed 41,400 workers nationwide and in Canada, according to the company’s annual report.

WestRock leases the rest of the 310,000-square-foot tower from Select Income REIT, a Massachusetts-based real estate investment trust that purchased the building in 2013 for $143 million. The tower was constructed in 2009.

The two floors – the eighth and ninth – are being marketed by Colliers’ Ken Campbell, Kit Tyler and Matt Hamilton. The leasing rate for the subleased space is $28.50 per square foot.

The sublease includes access to the building’s cafeteria, coffee shop and fitness center. Furniture is potentially available with the space, and the building has immediate access to Brown’s Island and the Canal Walk.

The two floors add to a glut of available office space downtown. Riverfront Plaza and the Bank of America Center, which were among a string of towers that changed hands in recent months, have about 250,000 and 120,000 square feet available, respectively, according to information from CBRE | Richmond. And the three-building James Center, which is headed to foreclosure, has nearly 300,000 square feet open to lease after anchor tenant McGuireWoods left for Gateway Plaza.

Meanwhile, Dominion Resources is building a tower to replace the existing six-story, 269,000-square-foot Richmond Plaza building at 111 S. Sixth St. And CarMax has announced its first foray into downtown Richmond, moving into a 26,000-square-foot space in the Lady Byrd Hat factory building.