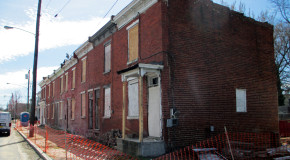 A Church Hill project is on hold as its developer sorts out a legal dispute with investors. Photo by Jonathan Spiers, March 2015.

After suing the investors she enlisted on the project, the developer behind a stalled effort to restore a block of 19th-century rowhouses in Church Hill has filed for Chapter 7 personal bankruptcy protection.

Deanna Lewis, who last August filed an $8.35 million lawsuit on behalf of herself and her company, Heirloom Restorations, against husband-and-wife investors John and Benedicte Whitworth, filed a voluntary petition in U.S. Bankruptcy Court on Tuesday after weeks of failed negotiations between their attorneys.

Lewis said she filed for bankruptcy to clear her debts and move forward and hopes the filing will reopen the lawsuit, which she had agreed to dismiss in a mediation agreement with the Whitworths during discussions of a possible buyout from the real estate project.

“It didn’t have to get to this point,” Lewis said. “I’m basically insolvent because of this. It has destroyed me financially.”

Lewis had enlisted the Whitworths to help fund the restoration of seven attached rowhouses and a former general store that was converted into a home along O Street between North 25th and 26th streets. The parties formed an LLC, Deworth Restoration Associates, which was also named as a defendant in Lewis’s lawsuit, to go forward with the project that included development of an adjacent vacant lot and a restaurant property at the corner of O and 25th.

Construction began two years ago but stalled last year in the months leading up to Lewis’s lawsuit. In it, she accused the Whitworths and the LLC of a scheme to take control of the project and “oust Lewis and steal the value and future profit stream she created.”

The suit alleged that the Whitworths colluded with contractors, bankers and others to wrest the project away from Lewis and transition from silent partners into a controlling position.

The suit sought a jury trial and remained active as of Tuesday’s bankruptcy filing, but Lewis said it had essentially been put on hold during mediation talks earlier this year.

Lewis said she and the Whitworths had reached an agreement during mediation in which she would buy their 50 percent share of the project by March 19. She said environmental studies and other work needed for that process took longer than that date and required her to ask for an extension, which she said the Whitworths granted so long as she agreed to sign away her shares to them if her financing fell through or the project otherwise did not go forward.

Lewis said she agreed to that condition on April 15 and was waiting to receive the appropriate documents to sign, having been approved the month before for a loan in excess of $1 million that would have bought out the Whitworths’ shares and funded its completion with a different business partner.

That partner was later revealed to be Bryan Traylor of Unlimited Renovations, who has been active in the area adding higher-priced new home construction to Church Hill’s housing stock. Traylor acknowledged his involvement in the O Street project publicly in a panel discussion in March on urban infill developments.

When the Whitworths learned Traylor was Lewis’s new business partner, she said the couple came back with a demand for an additional $100,000 on top of the original buyout amount to which they had agreed. 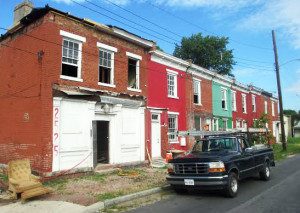 The string of houses was long neglected and originally covered in colorful paint. Photo by Brandy Brubaker, June 2014.

Lewis said she declined that proposal because there was no more money available from the loan. She said an attorney for the Whitworths came back the following day and offered up to $10,000 for Lewis to sign away her shares and walk away from the project. She again declined and pursued the bankruptcy route.

Lewis said filing for Chapter 7 protection puts her lawsuit in the hands of the bankruptcy trustee, who would decide whether to go forward with the suit to resolve Lewis’s claims against the Whitworths.

Reached Tuesday, John Whitworth said he and his wife would like to discuss the project but could not do so because they are bound to a confidentiality agreement. He referred questions to their attorney, Cullen Seltzer of Sands Anderson, who provided the following statement over email:

“Deworth Restoration Associates, LLC (“DRA”) owns seven O Street Properties in historic Church Hill. Despite the bankruptcy filing by Ms. Lewis, DRA looks forward to developing those properties in the near future in a way that honors the community’s historic and architectural traditions.”

For his part, Traylor, who is not involved in the bankruptcy and is not named in the lawsuit, said he hopes the project can finally come to fruition.

“I hope something happens for the sake of Church Hill,” Traylor said, “especially for the neighbors living there. It looks like a bomb went off in there. I feel for those guys.

“Any blight in a neighborhood is a negative,” he said.

Lewis said her hope is that the bankruptcy filing will revive the lawsuit and, in turn, the project.

“I’m not necessarily devastated by this, but I feel like this is the step I have to take,” Lewis said. “Essentially, they forced my hand.”

An initial meeting between creditors and the bankruptcy trustee is scheduled for June 27. Attorney David Spiro of Spiro & Browne made the filing on Lewis’s behalf.

This isn’t the first time John Whitworth has been caught up in a Church Hill business dispute. He was one of several defendants sued in 2013 by Captain Buzzy’s Beanery owner Bob Buffington, who accused them of trying to thwart his plans to expand the coffee shop’s hours and sell beer and wine.

Those allegations against John Whitworth, which were ongoing when the Whitworths and Lewis joined forces, were dismissed on the grounds that he had no interest in an existing or envisioned venture that sold alcohol and would compete with Buzzy’s. That’s according to Lewis’s suit, which referenced the Buzzy’s case.

“After said lawsuit was dismissed, John Whitworth and his wife were free to hijack the (O Street) project and heist the value and profits Lewis had created through her and Heirloom’s efforts,” Lewis’s case states.

Buffington’s attorney in that case was D. Hayden Fisher, who Lewis hired to bring her case against the Whitworths.

This article was not run on CHPN!