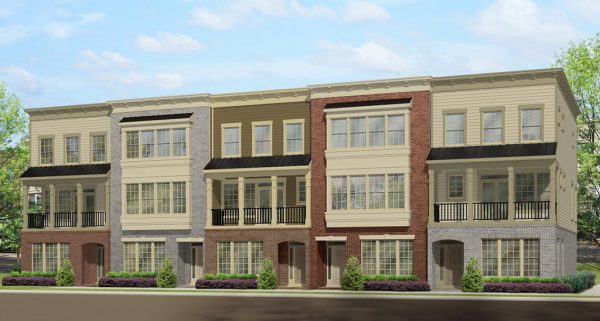 Rendering of the planned townhomes at the southern end of Rocketts Landing. (HHHunt)

Note: This story has been revised to correct the number of townhome units HHHunt has built and is under contract to build at Rocketts Landing.

Another cluster of residential development is getting underway at Rocketts Landing, adding to renewed momentum for the next phase of the mixed-use community on the Richmond-Henrico line.

HHHunt Homes has started sales and is securing building permits for its next crop of townhomes in the riverfront development. The 15 four-story units – five of which have already sold – each will average about 2,000 square feet and start at $370,000.

The townhomes are the latest by HHHunt at Rocketts Landing, where construction is also underway on a 156-unit apartment building, likewise on the southern end of the development. KBS is constructing that building for a partner entity of Rocketts Landing developer WVS Cos.

HHHunt expects to build the 15 townhomes based on presales by the end of this year.

Susan Williams, sales director for HHHunt Homes’ Richmond division, said responses to the townhomes and demand for the new units supported an increase in asking price – from $300,000 in 2014 to $370,000 for this latest wave.

“We’ve had a lot of people on a waiting list wanting to know when we’d have new product available,” Williams said.

HHHunt also has 13 new, 24-foot-wide townhomes that will include options for an elevator and a penthouse owner’s suite. Pricing and floor plans for those units have yet to be released.

The 13 wider townhomes will be just downhill from the apartment building, while the 15 townhomes recently listed will be downhill from that, closer to the river. The apartments, which will consist of one- and two-bedroom units and some commercial uses, are planned to open next April. A retail strip along the river is also planned.

HHHunt has built 22 townhomes at Rocketts Landing thus far and is under contract to build 50 more. It started building an initial wave of townhomes in 2014, and received approval last year to construct 47 units. WVS Cos.’ Richard Souter said the developer is installing $4 million of infrastructure to support the new construction. 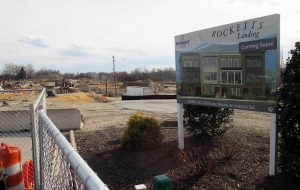 Souter said the surge in activity is the result of an agreement reached last year with the City of Richmond to extend water and sewer utilities to the Henrico portion of Rocketts Landing. The 50-acre development straddles the city and county along Route 5, where East Main Street turns into Old Osborne Turnpike.

Development there seemed to have stalled in recent years in lieu of the agreement, which Souter said took longer than anticipated.

“This is all a culmination of having the water and sewer agreement that got done. That really opened up another four blocks of development,” Souter said. “We’ve always wanted to push down and continue development on the Henrico side.”

In March, WVS purchased a 1.38-acre parcel at 5100 Old Osborne Turnpike, between the existing development and the apartments under construction. That property, purchased for $1.85 million, is planned to house a dozen more townhomes and a surface parking lot.

Downhill from there, another apartment building is planned, along with additional retail along the river. Souter said WVS has engaged Cushman & Wakefield | Thalhimer to determine best uses for the retail spaces.

“We still have a lot to go,” Souter said, adding that a couple more land buys could add to the development.

“There may be one or two additional land parcels that could be incorporated into Rocketts in the future, but we have plenty of land now to march forward with development,” he said.

Souter said the timing also worked out with the completion of Stone Brewing’s production facility and the Virginia Capital Trail that runs alongside the development, as well as the upcoming Stone World Bistro & Gardens and planned riverfront improvements from the city.

“That whole area is going to look fundamentally better than it does today,” he said. “I think this time next year we will have a much more attractive entrance from the city side.” 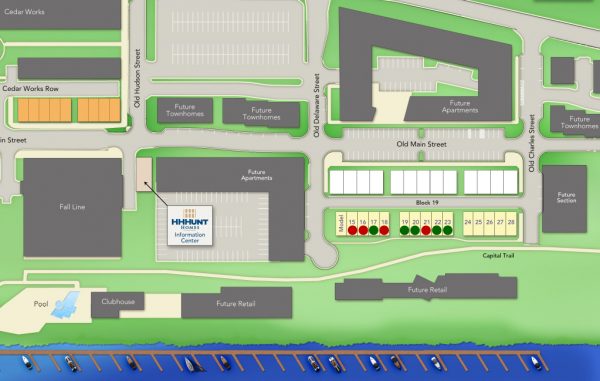 The new townhomes are marked with red and green dots, and the new units to be announced in June are above in white.(Courtesy HHHunt)

The new riverfront town homes seem really exciting. Then you realize that in a few years, that view will be replaced by a Chipolte and and Verizon wireless store. Not so exciting.

you forgot the obligatory nail salon and sub shop.