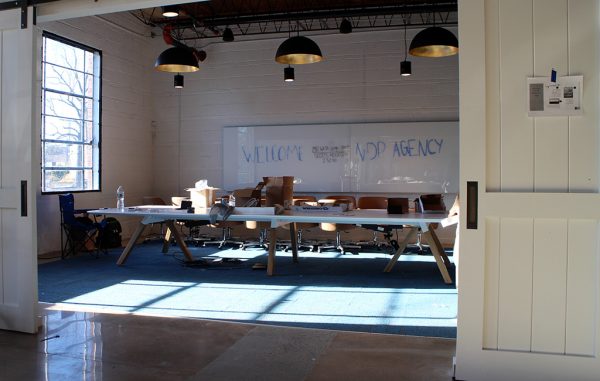 After a six-month, $1.5 million upgrade, a 71-year-old industrial warehouse in Scott’s Addition is now the home base of one of Richmond’s biggest ad agencies.

Ndp on Friday is opening its new headquarters at 2912 W. Leigh St., in a 15,900-square-foot space that previously housed auto parts supplier Auto Plus.

The space, which makes up most of a building that also houses X-Team Fitness, is now filled with a variety of offices and meeting rooms for the 33-year-old agency that is relocating from a 9,500-square-foot space at 1 E. Cary St.

With large open rooms meant to encourage collaboration, the space has details original to the building, including two large barn doors and restored skylights.

Three barn doors were added to the space, which also includes a café, conference rooms, privacy rooms, presentation areas with magnetic walls for posting works-in-progress, a conference table that converts to a ping-pong table, a rear deck and a meditation room.

CEO Danny Fell said the space is designed to accommodate 47 employees – a number he expects to reach with new hires by yearend. The agency, which recently acquired local peer Free Agents Marketing, is moving 40 local employees from the Cary Street space. The combined firm totals 65 staff with offices in Norfolk, Roanoke and Tennessee.

Ndp was alerted to the building by Henry Liscio, a local real estate broker who’s marketing the Cary Street building for sale for $1.6 million. A sale for that property is pending and set to close in December, Liscio said. 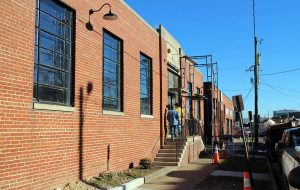 Fell said ndp also looked at the nearby HandCraft Cleaners and Symbol Mattress buildings but neither could provide the amount of space it was looking for all on one floor. It signed a 10-year lease for the Leigh Street space, which building owner Brian Pearson has been renovating since June.

“This really fit our needs best,” Fell said. “We have some flexibility in this space, but we’ll be utilizing all of it from the get-go.”

Pearson, who has owned the building since 1997, worked on the renovation with architecture firm Hickok Cole. Pearson served as general contractor and worked with contractor Phil Noonan of local firm Noonan Co.

Ndp also worked with Cell Tech on IT infrastructure, as well as Code 3 AV on audio-visual equipment, Sure Hand Signs for signage, and MOI, a Baltimore-based interior design firm.

Pearson said the conversion to office space went according to plan for the most part, with some unforeseen challenges that included a switch from wood to concrete for part of a wheelchair ramp that was added on the side of the building.

“Being a 71-year-old building, you don’t know what you’re going to uncover,” he said. “We had some trying moments, but I think all-in-all the whole team worked well together.” 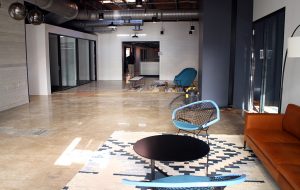 Pearson also credited staff with the City of Richmond, specifically in its planning and development review department and the building inspections and permitting bureau, which has been a target of complaints from developers in recent months and is undergoing changes – announced this week – aimed at improving operations.

Welcome to the neighborhood ndp,