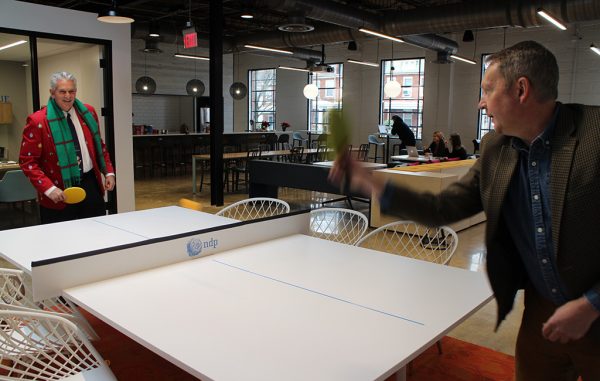 When ndp and Free Agents Marketing were in talks earlier this year about joining forces, little did the two local ad agencies know that they were also vying against each other for an account with a prospective client.

The way former FAM president Ken Wayland tells it, the two agencies, which announced their planned combination in September, both had responded to a request for proposals from Calyx, an outpatient addiction recovery company that was looking to enter the Richmond market.

The company had narrowed its search to two finalists when Wayland, now an executive vice president with ndp, got a phone call from his Calyx contact.

“He said, ‘I’ve narrowed it down to two agencies, and either one’s going to be a great choice, but we’re really struggling as to which direction to go.’” Wayland said. “I said, ‘If you don’t mind me asking, who’s the other agency?’ And he said, ‘It’s ndp. You may have heard of them.’”

The deal officially closed at the start of this month, with ndp acquiring FAM to create a $30 million firm with 65 employees – more than 40 of those in ndp’s new office in Scott’s Addition. Ndp CEO Danny Fell said the combination makes the firm the largest locally owned ad agency in Virginia, as The Martin Agency, while bigger, is owned by New York-based Interpublic Group.

Fell and Wayland met with BizSense earlier this month to talk about joining forces, how the combined firm approaches creativity, and to play a little ping pong. The following is an edited transcript:

Richmond BizSense: We call this series Creative Q&A, but you’re both more on the administrative side of the biz. Have either of you ever been involved in the creative side?

Ken Wayland: They won’t give me crayons or a napkin. I’ve never been allowed to touch anything that has to do with creative. (laughs)

Danny Fell: We have a belief that creativity comes from all the people in the agency. And when we talk about creative ideas, they can be ads, or they can be strategies or tactics or media ideas. We define creativity pretty broadly.

RBS: When did talks about combining start?

KW: Danny and I had lunch a year ago last summer, but really started conversations about potential partnership in January 2017. The foundation of those conversations always exist on three platforms: what’s in the best interest of our clients, our colleagues and our community.

I’ve known (ndp principals Roger Neathawk and Susan Dubuque and retired principal Chuck Miller) since our inception. I often tell people that when we thought about getting into this industry, we looked for mentors, and we purposely put ndp and Roger and Susan and Chuck on the top rung of that ladder, because they really depicted how we want to be able to treat our clients, our colleagues and exist in our community.

DF: This company, which goes back 34 years, had a history of doing some acquisitions. We had done four acquisitions in the last 15 years, but interestingly none of them were in this market. So the idea of being able to come together and create a bigger entity here in Richmond with two great agencies was really attractive.

RBS: Prior to the merger, FAM had lost Bon Secours, one of its biggest accounts. Was that a factor in the decision?

KW: It was, and it’s interesting because things have a tendency to work out for the best. Sometimes our paths are not always created or chosen; sometimes they just unfold.

The transition of Bon Secours out of the client base actually is what spurred us into diversity. We were so locked in in health care with Bon Secours; since their departure, we expanded our interest into Hampton Roads, we secured a relationship with the port … All of a sudden it was like somebody opened our eyes to the world that exists in hospitality management, development, financial services. We just merged two banks in the spring and went through the whole nomenclature exercise. So it turned out to be a blessing.

DF: The other irony is we couldn’t have done this had we both still had those two accounts. We represent VCU (Health), they represented Bon Secours. Those are two competing entities, and as most agencies would, we give exclusivity in a market. Not that we would have wished either one of us would lose an account, but the reality is it opened the door to having a deeper conversation at that point. 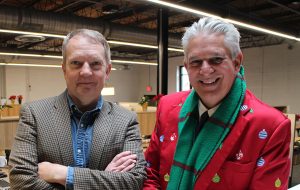 RBS: Have you found that the two firms took similar approaches to creativity, or have you had to adjust to each other?

DF: I think the FAM team had a little bit of an edge on us. When we first started talking, Ken invited me out to tour their space. At that point, we had barely begun remodeling, and when I walked through their space, I was like, “Holy crap, this is what we’re trying to do.”

I asked the folks who were heading up our effort to go and look at their space, because he had the vision when they built that space out that very much is what you see here. I don’t know that we made major changes as a result of it, but it confirmed we were on the right path.

RBS: How does the combined ndp foster creativity? What’s your approach to creativity, beyond the physical space you’ve provided your employees?

DF: It is a lot about the collaboration, but (also) exposing people to a lot of different things. If we only look at ads in magazines and what our industry is doing, we’re short-changing ourselves and our clients. We want our people to be exposed to products that are on a grocery store shelf, changes in how museums are arranging exhibits, music, art, travel, because all of those things stimulate creativity.

From a client perspective, we talk a lot about getting to insights about an audience that a company or brand is trying to connect to. There’s always a tendency on the business side to want to tell the audience or community why we’re great or why our product’s great, but it’s more about how does the consumer see your product or brand, so what is the insight that we can foster that would in a sense get to changing somebody’s ideas or behaviors or inspiring them.

RBS: While ndp and FAM were separate, were there particular campaigns or ads that the other one produced that you were envious of?

DF: I remember looking at (FAM’s) website, and they were – and we are now – doing more retail work than ndp has traditionally done. We’ve been more in the services, healthcare in particular, nonprofits. They were doing some retail things: packaging and sales and lead generation that I was envious of, because it was good work and I wanted our agency to be doing more of that.

KW: I was always impressed that they don’t have any geographic boundaries. One of the things that happens sometimes in the agency world is you have a tendency to stick a compass in your physical address and draw a little circle around it and say we’re going to live here. And that’s not something that ndp has ever done. Their presence was more national. Our focus and our brand was more regional and local. So together, now we have this huge footprint, we’ve got a diversified portfolio, we’ve got no geographic boundaries, even though we are dominant in the commonwealth. We’re the only agency in the commonwealth that has physical representation in Southwest Virginia, Central Virginia and southeastern Virginia.

RBS: Are there other local shops whose work you admire?

DF: I was in the hotel on the way over this morning and saw the new Google Chromebook ad that Arts & Letters did, and it was running on one of the stations. I think it’s a well-done spot. I’m excited to see what kind of work comes out of that agency. I think Barber Martin is doing some good stuff.

RBS: How has it been working out of your new space in Scott’s Addition? Did you pick the space knowing you’d need to make room for FAM?

DF: The timing of moving was ideal, because we weren’t going into their space, they weren’t coming into our space. We were all coming to a new space, and what are the odds of that happening? We couldn’t have planned it if we tried, but the reality was it just happened to be how things were playing out. I think that goes a long way as to people feeling like this isn’t ndp’s original space and this isn’t FAM’s space. This is the new FAM-ndp together space.