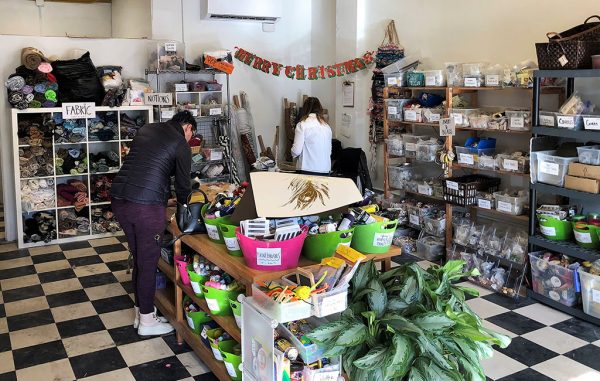 By way of Southside, a retail shop is adding to the continued interest in Brookland Park.

The move more than triples Scrap RVA’s space, going from 288 square feet in Manchester to 960 square feet at its new Brookland Park digs.

“The move has certainly given us the space we need to showcase the materials that we have,” said Molly Todd, director of Scrap RVA. “We liked the area we were in, but we really need more space to collect and grow the types of material we offer for sale.”

The store sells a variety of used, and some new arts and crafts material such as fabrics, picture frames, construction paper, metal, wood and paint. Price points for the material ranges from 10 cents up to $5.

“The idea of being an arts thrift store is to set price points that everyone can afford,” Todd said. “We wanted the store to be accessible for everyone,”

Its new building in Brookland Park is owned by Cory Weiner, a local investor and developer with Richmond-based CW Performance Group who has amassed a large portfolio of storefronts in the neighborhood.

Ann Schweitzer Riley, a broker with One South Commercial, represented CW Performance Group in the lease.

Scrap RVA is a nonprofit that is part of a national network of Scrap-branded, donation-based stores and donation centers focused on the arts.

Todd said Scrap also provides a range of educational opportunities to residents and promotes reuse-based artists, and it plans to introduce programs to the community in the coming months. Those efforts are paid for in part by money spent in the store.

“Being able to engage the community, and having the space to accommodate workshops and artist, was a major reason for the move,” Todd said. “We had to get those programs rolling.”

“We think the Northside will embrace it. We’ve already had some people come in and are curious. That’s a good thing.”

Scrap RVA is the latest in a string of new retailers and restaurants moving into the neighborhood.

Kristin and Kia Player plan to turn a former auto repair shop at 400 W. Brookland Park Blvd. into the block’s newest restaurant – Dixie Bell’s. The restaurant is set to open during the first week of January.