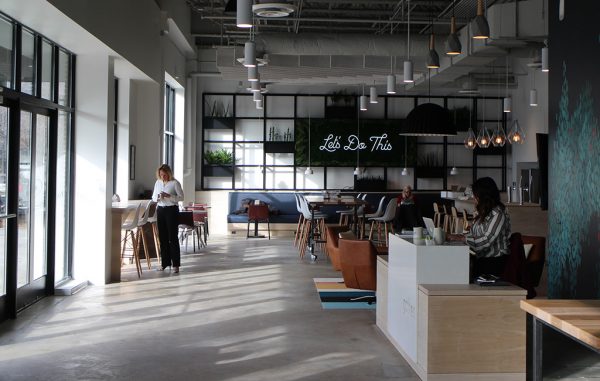 The 18,000-square-foot Gather space has over 90 private offices and common areas. (Mike Platania)

After establishing itself in the city, a local chain of coworking spaces has cut the ribbon on its latest and biggest outpost.

“We want to have a diverse group here,” Crenshaw said.

Gather sits at the corner of Old Brick Road and Whittall Way in a space that had been vacant since West Broad Village’s construction nearly a decade ago.

UrbanCore Construction was the general contractor for Gather, with Hickok Cole as the architect and Campfire & Co. as the interior designer.

Crenshaw said the company is looking for more locations for further expansion.

A few other coworking spaces are preparing to join Gather in Richmond.

The Broad is slated to open next month at 209 Foushee St., while national brand Level Office purchased 11 S. 12th St. for $4.6 million, where it plans to open its first Richmond space and 18th nationwide this summer.

Awesome coverage Mike, we’re really excited for James and the Gather team. Also, thanks so much for the mention!

It’s a fabulous space – Congratulations, James! I’m sure there will be a long waiting list SOON!