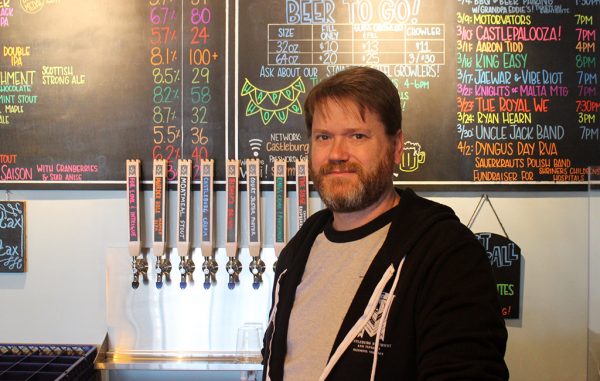 One of the city’s smaller breweries is expanding the walls of its castle and the reach of its little kingdom.

Castleburg Brewery at 1626 Ownby Lane, around the corner from Hardywood, is doubling the size of its taproom as it begins to distribute beer around the state.

Owner and head brewer Karl Homburg said it will knock down a wall to grow its tasting room to about 3,000 square feet, a move that will leave its current 1,200-square-foot brewing area intact.

“It’ll all be for a new seating area,” Homburg said. “We just ran out of space.”

Homburg said he aims to have the added area ready this month.

Castleburg also recently inked its first distribution deal to give it a presence beyond its Ownby Lane confines.

The new deal extends Castleburg’s reach locally to restaurants like Hurley’s Tavern in Innsbrook, RVA Draft Room in Carytown and The Caboose in downtown Ashland, while also taking its kegs to Virginia Beach, Fredericksburg and Charlottesville.

The beers on its distribution list include the Court Jester Porter, Brown Ale and Cream Ale, the latter of which won first place at the Virginia Craft Brewers Guild’s awards last summer.

Homburg, a longtime homebrewer, opened the brewery in May 2016 after a Kickstarter campaign. Castleburg is shipping only kegs currently, and Homburg said he’s considering going into canning eventually.

“I had no intentions of distributing (when it first opened),” he said.

Despite being a New England native, Homburg said he’s less keen on brewing the juicy, New England-style IPAs that are popular among some other breweries in the area.

“It’s about styles – I like the classic styles of beer,” he said. “I’m not trying to do whatever’s hyped up latest.”

Castleburg joins Final Gravity Brewing Co. as another smaller brewer to increase the size of its home base. Last fall, the Lakeside brewery moved its home-brewing supply shop to an adjacent suite to open more seating in its tasting room.