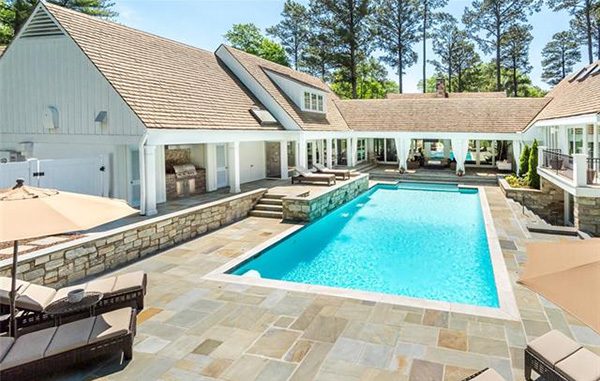 The home at 16 Country Squire Lane was listed for $2.9 million. (CVRMLS)

A multimillion-dollar listing near the University of Richmond hit the market this month, next door to two other notable residential properties that set local sales records in recent years.

The 1.5-acre property is alongside South Ridge Road between the recently sold Windward mansion at 1 S. Ridge Road and the site of another home at 101 S. Ridge Road that was the priciest area home sale in years, before it was demolished last year and is being replaced.

The Country Squire Lane home was listed by Michelle Ferguson with Long & Foster affiliate Virginia Properties. Ferguson is representing the sellers, listed in Henrico County property records as trustees of William Clark McGhee and Pamela H. McGhee, who purchased the home in 2013 for $926,000.

A county assessment most recently valued the property at $1.24 million. Ownership of the home was transferred to the trustees in December.

Clark McGhee is co-founder and CEO of GradCapital, a Henrico-based firm that provides student financing services for colleges and financial institutions. Pamela McGhee is a retired physician and works as a home renovator and designer.

Ferguson said she would not comment on the listing without permission from her clients.

Totaling five bedrooms, six bathrooms and two half-baths, the stone and Hardiplank house was built in 1975 and designed by Glavé, Newman and Anderson, now Glavé & Holmes Architecture. The listing states the McGhees renovated the home over the past five years. 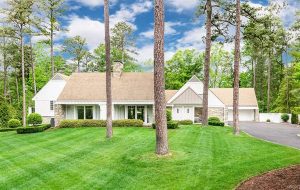 U-shaped with a central courtyard and pool, the house includes a 55-foot gallery foyer, mahogany ceilings and tile roof. The property also includes a two-car garage, outdoor kitchen, pool house and wet bar. The listing states the house was opened for the Garden Club of Virginia’s Historic Garden Week in 2016.

The home is listed at the same asking price as the next-door Windward, which initially was listed in 2016 for $2.9 million and sold last summer for $2.74 million after being taken off-market, relisted and put under contract in June.

Around the same time, across Country Squire Lane on the other side of the home, the 7,000-square-foot colonial at 101 S. Ridge Road was torn down about a year after it was purchased for $5.5 million by Matt Goodwin, son of local philanthropists Bill and Alice Goodwin.

Farther west along River Road, a 7,400-square-foot home beside the Country Club of Virginia’s James River Course went under contract within a week of its listing this month for $2.2 million.