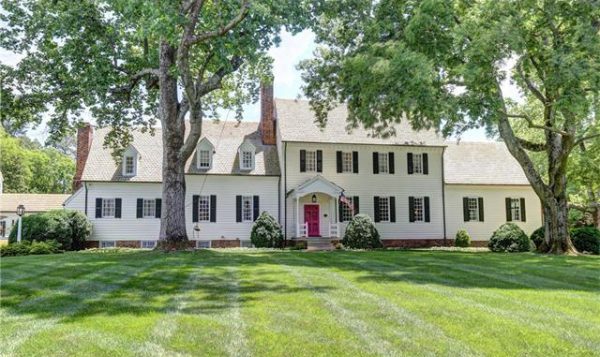 The reconstructed home at 1 S. Ridge Road originally was built in Dinwiddie County in the early 19th century. (CVRMLS)

After a year on the market, a 200-year-old reconstructed home near the University of Richmond has changed hands – from one “Greengate-r” to another.

The colonial-style house – a reconstruction of a Federal period dwelling relocated from Dinwiddie County nearly a century ago – was initially listed in June 2016. It was taken off the market that October and relisted in June this year, when it went under contract. The sale closed Aug. 15.

A deed recorded in Henrico County Circuit Court lists the buyers as Radoslav and Jill Shipkoff. They were represented in the deal by Lacy Williams of Joyner Fine Properties.

A message left for Williams was not returned Thursday.

Radoslav Shipkoff is a director with Greengate LLC, a Washington, D.C.-based financial advisory firm with a focus on financing for international infrastructure projects.

The seller was Donna Sharp Suro, who purchased the home in 2005 for $1.1 million. The latest county assessment valued the 1.5-acre property at $1.74 million.

Suro was represented by Wes Atiyeh with Joyner Fine Properties. He declined to discuss the sale.

Suro is a daughter of the late Richard Sharp, the former Circuit City CEO and CarMax founder. Her husband is Craig Suro, a local investor and former Virginia assistant secretary of health and human resources. 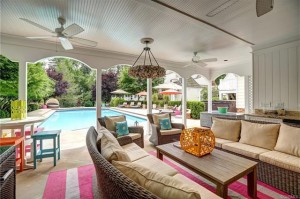 Donna Suro is also a franchisee of the CycleBar spin studio at GreenGate, the 75-acre mixed-use development in Short Pump – not to be confused with Shipkoff’s firm.

Atiyeh said when he listed the home last year that it had undergone two extensive renovations since Suro purchased it more than a decade ago. Built in 1806 in Dinwiddie, the house was dismantled and moved to its current location in 1935.

The original exterior, chimneys, foundation and interior woodwork were reconstructed, and the home retained its Windward name, which Atiyeh said dates back to its Dinwiddie origin.

The house totals five bedrooms, six full bathrooms and six half-baths. Its living space spans more than 8,000 square feet across three levels, and the house includes a 1,300-square-foot carriage house with a two-car garage and upstairs rec room. The grounds include a backyard swimming pool and cabana-style pool house.

Windward is a block away from the most expensive home sold in the Richmond area in years: a 7,000-square-foot colonial on 6.3 acres at 101 S. Ridge Road that was purchased last year for $5.5 million. The 80-year-old home, bought by Matthew Goodwin, was demolished in June.