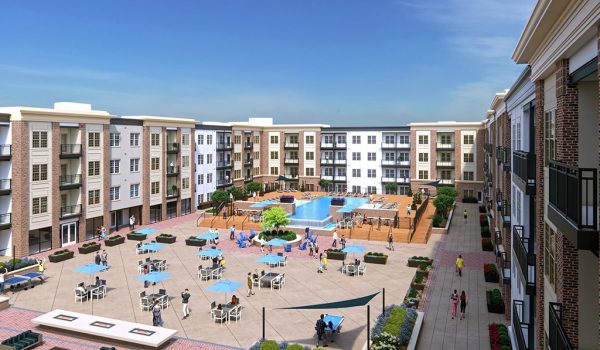 A rendering of the courtyard. (Courtesy Gumenick Properties)

A residential anchor of a years-in-the-making mixed-use development is on track to deliver the community’s first rental units this fall.

Construction is nearing the finish line on the 327-unit Penstock Quarter apartments in Libbie Mill-Midtown, the community by developer Gumenick Properties between Staples Mill Road and Libbie Avenue.

Pre-leasing for the apartments starts this month, with the first units to open to residents in November and full completion anticipated for early next year. 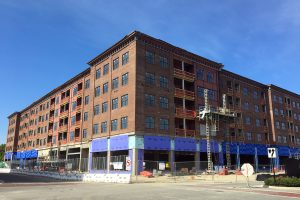 Construction started in mid-2016 and largely has remained on schedule, said Skip Nash, vice president of property management for Gumenick.

“We’ve been delivering townhomes and condos for a while in the community, so the complement of these apartments at Penstock Quarter will help put that mixed-use piece of residential together,” Nash said.

Apartments range from studios to three-bedroom units, with floor plans ranging from 455 to nearly 1,300 square feet. Monthly rents start at just over $1,000.

The five-story, nearly 500,000-square-foot building includes 40,000 square feet of ground-floor retail space fronting surrounding streets, a parking garage on the first two levels and a 1-acre central courtyard above that, with a swimming pool, sundecks and grilling areas enclosed by the upper-level apartments.

Each apartment includes a balcony facing either the courtyard or outward. The majority of the units are one-bedrooms and studios, which property manager Diane Tidwell described as a new product for the area of Henrico. 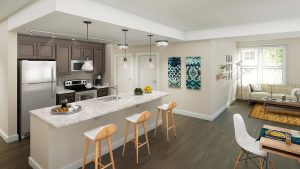 A rendering of an apartment interior. (Courtesy Gumenick Properties)

Whiting-Turner is building the apartments, which were designed by Richmond-based Commonwealth Architects. Gumenick will manage the property.

Tidwell and Nash would not disclose a construction cost for the building, in keeping with Gumenick’s practice of not releasing such figures.

Of 994 for-sale homes approved for the development, Nash said 56 have been built and only one remains available for purchase. He said another 58 are under construction, 36 of which have been sold.

Nash said future phases would include additional residential units and office space. The 80-acre development, which started in 2014 and is slated to take 10 years to complete, is approved for 994 homes, as many as 1,096 apartments and about 160,000 square feet of retail space.

Gumenick has been trying to fill the retail anchor space left vacant by gourmet foods store Southern Season and in-house restaurant Southerly, both of which closed in 2016. Nash said he had no updates on a user for the 53,000-square-foot space.

An entity tied to Gumenick filed a lawsuit last year against former Southern Season CEO W. Clay Hamner and CFO Brian Fauver for fraud and more than $350,000 in damages over an agreement tied to the store’s lease. That suit remains active, with the latest federal court filings recorded in April.

They are never going to fill the Southern Seasons store as one space; it will have to be split into smaller spaces unless they say want to put in an Aldi or Walmart Neighborhood Market. The space is too small for most traditional big box stores and too large for a small business. And the location is terrible for getting in and out via Staples Mill Road.

I agree about sectioning the Southern Seasons store. This development has been kind of a disappointment but hopefully in time it will fill out. It’s certainly an area ripe for growth.

They have done a nice job with the aesthetics of this development. Let’s hope the county widens (and extends a right turn lane) Bethlehem Road at Staples Mill Road to accommodate the additional traffic at an already congested intersection. A bike lane would be great as well.

Libby Mill is a perfect place for a drive-though Starbucks.

Lumber Liquidators will be leasing the entire Southern Seasons store for their Headquarters.