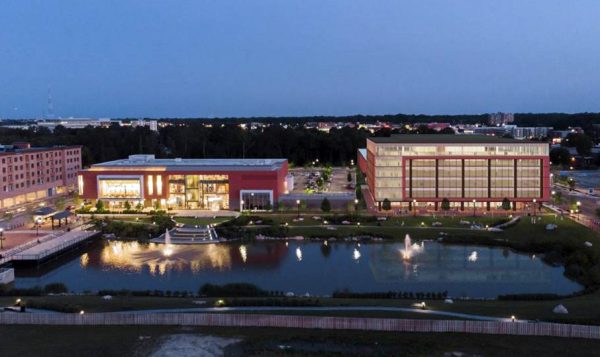 Responding to higher-than-expected demand for office space, the developer behind the mixed-use Libbie Mill-Midtown is moving forward with plans for a new office building – and is making room for more.

Gumenick Properties announced last week that leasing has started for a planned six-story, 142,000-square-foot office building beside Libbie Mill Library, in the center of the 80-acre project between Staples Mill Road and Libbie Avenue.

While the development has approval from Henrico County for as many as 994 condos and townhomes, Gumenick vice president Shane Finnegan said fewer for-sale homes will be built to make room for additional office space.

“Our original zoning was contemplating a significant amount of residential for rent and for sale, with a lower amount of retail and office,” Finnegan said. “Coming out of the recession, as we started actively developing Libbie Mill, we began to get a lot of interest and were reached out to by a significant number of office users. Our plans hadn’t contemplated that demand.

“It took us awhile to reorganize our approach, and we are just now at the point where we have the zoning in place and we have the product at a level where we can market it broadly,” he said.

Gumenick is still committed to its approved 1,096 apartments, Finnegan said, the first of which are nearing completion with the Penstock Quarter building. The 327-unit is under construction opposite the library from the announced office building.

Those revisions, made in 2015, allow for more flexibility in what can be built at Libbie Mill, which is approved for a 250-foot-tall tower and two buildings up to 175 feet in height. Other building heights are restricted to 100 feet.

Finnegan said the taller buildings are still planned to be built, but their makeup would change from residential to primarily office and other commercial uses, including a potential hotel.

“Obviously a strong office center would support a smaller boutique hotel, so if we’re fortunate enough to be successful leasing office space and building office space, that would be a natural fit,” he said.

To be called Harp’s Landing, the six-story office building would consist of five floors of office above ground-floor retail, with garage parking and covered pedestrian walkways. The exterior would consist of glass, steel and brick, and the interior would include floor-to-ceiling windows with views of the adjacent Libbie Lake.

Finnegan would not say how much the project is expected to cost, as Gumenick makes a practice of not releasing those numbers. He said Gilbane Building Co. has been selected as the contractor, with HKS Architects handling the design.

Leasing would dictate when the building would break ground, though Gumenick is aiming to complete the building no later than 2020. CBRE | Richmond’s Malcolm Randolph is handling leasing.

Future sections of Libbie Mill likewise would follow market demand. Finnegan said the 80-acre development, which started in 2014, is just over 50 percent of the way to buildout.

The development also has available commercial space already built, primarily the 53,000-square-foot space vacated in 2016 by gourmet foods store Southern Season and in-house restaurant Southerly. The departures are the subject of an active lawsuit.

Offices definitely make a lot of sense in this location with it being close to 64 and Broad St.