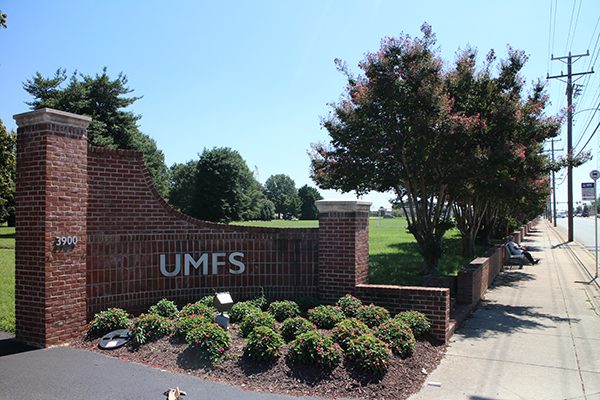 UMFS is working with Spy Rock to develop the 4.5-acre tract at the front of its campus along Broad Street. (Jonathan Spiers)

United Methodist Family Services announced Thursday it has entered into a long-term land lease with Richmond-based Spy Rock Real Estate to develop the fields at the front of its campus along Broad Street with a mix of apartments and commercial space.

The development and lease, terms of which were not disclosed, would help UMFS fund other buildings it is planning on the opposite end of its 33-acre campus, located at Broad and North Hamilton streets across Interstate 195 from Scott’s Addition. 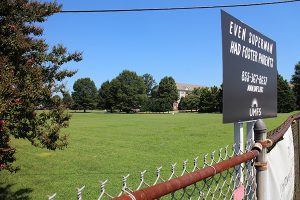 On the 4.5-acre tract along Broad Street, Spy Rock plans to build two four-story mixed-use buildings that principal Taylor Williams said would be comparable to its Preserve at Scott’s Addition and Symbol developments across the expressway. Designs remain in the works, but Williams said the buildings would total more than 200 apartments above ground-floor commercial space fronting Broad Street.

Spy Rock was selected over five other firms UMFS considered for the project, CEO Greg Peters said. The nonprofit announced its intention to develop the site as part of a campuswide update in 2014. It secured rezonings to accommodate the projects last year.

“We liked what they had done in Scott’s Addition and felt like they had a great concept,” Peters said of Spy Rock, adding that the firm’s proposals were the most compatible with the buildings planned on the other end of the campus.

RRMM Architects is designing those buildings, which are estimated to cost between $18 million and $19 million. Additional buildings would follow in the next 10 years, with funding coming from a mix of revenue from the lease, campaign fundraising and debt reductions, Peters said.

For the mixed-use buildings that would front Broad Street, Spy Rock is planning a mix of primarily one- and two-bedroom apartments averaging about 700 and 1,000 square feet, respectively. A smaller number of three-bedroom units would average about 1,300 square feet.

Williams said rents would be consistent with the market and comparable to Symbol and the Preserve, the latter of which starts at about $1,900 per month for a two-bedroom unit, according to its website.

Peters said the units, which he described as workforce housing, would include a variety of rents to accommodate a range of income levels. He said the ground-floor commercial spaces could include retail, office and restaurant space.

Poole & Poole Architecture is designing the Spy Rock buildings, which Williams said would break ground in 2019. He would not provide a cost estimate for the buildings, which would be constructed in 18 months to two years.

Williams said he and fellow Spy Rock principal Andrew Basham were drawn to the project for its location and the opportunity to work with UMFS. 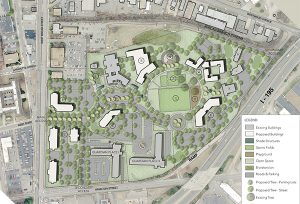 A master plan from 2014 shows existing and planned buildings on the UMFS campus. (Courtesy of UMFS)

“The site has best-in-class access and visibility, with its prominent location on Broad Street and proximity to interstates 195, 95 and 64,” Williams said in an email. “It is also exciting to partner with UMFS, which is a terrific organization.”

Peters said a goal for the mixed-use section is to integrate the campus with surrounding development, and provide housing and services that could serve UMFS as well as the public. He noted the nonprofit hosts multiple meetings and conferences annually at the campus, which serves as its headquarters.

“We have over 1,600 volunteers that work with us, so part of our hope is that we would have people living in the community that would be interested in volunteering and working with the children and youth on our campus,” Peters said. “Our belief is it will integrate us better into the Richmond community.

“It seems like development is really moving from Scott’s Addition west, and as this is one of the largest pieces of property available, right there at a good location at the intersection, our hope was it would also attract some millennials and potentially younger families to the area,” he said.

The project is the latest for Spy Rock, which redeveloped and recently sold its 376-unit Midtown apartment portfolio for a combined $56.1 million. The firm is also working in Scott’s Addition on a retail-office conversion of the former McKinnon and Harris building at 1806 Summit Ave.

One has to admire Spyrocks “walk to work ” development strategy. It seems everything they do is within a stone’s throw of each other. And it’s all terrific! The Scott’s Addition district in which Spyrock pioneered was absolutely alive last night with the opening of the Tang&Biscuit, the breweries, the restaurants, and the pedestrian traffic. It’s become quite appealing.