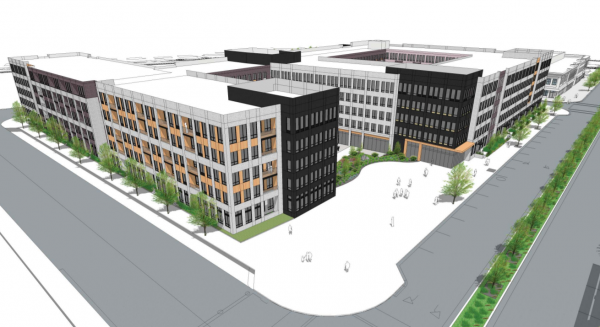 The developers of Libbie Mill-Midtown are beginning to plot out the next sections of the 80-acre mixed-use neighborhood.

Gumenick Properties this month filed plans for additional sections for the development, including new five-story, 350-unit apartment building at 5000 Libbie Mill East Blvd. and a new 11,800-square-foot retail center where a now-demolished Wells Fargo bank branch once stood at the corner of Bethlehem and Staples Mill roads.

The plans are under review by county planners and administrators.

The new apartment project is dubbed The Wellsmith and will include a mix of market-rate studio, one-, two-, and three-bedroom units.

It would add to the completed Penstock Quarter apartment building, which houses 327 units ranging from 455 square feet to up to 1,300 square feet, with rents starting at $1,032 a month for a studio unit and up to $2,700 for a three-bedroom.

“We’re already one-third leased at Penstock Quarter,” said Skip Nash, Gumenick vice president of property management. “The demand for apartments has been strong, and we anticipate that to continue.”

Gumenick is planning to break ground on The Wellsmith during the fourth quarter of 2019, said Shane Finnegan, Gumenick vice president of construction and development.

In conjunction with that new section, Finnegan said the firm plans to reconfigure the intersection at Staples Mill and Bethlehem roads.

“We’re going to tie the entryway to Wellsmith and the parking lot on the site into Bethlehem Road,” Finnegan said. “Much of the improvement along Bethlehem will occur from that entryway east to the Staples Mill Road.”

While construction on the apartment building is moving ahead, Finnegan said the firm still is determining when to break ground on the retail center at the edge of the development near Bethlehem and Staples Mill roads. Gumenick acquired that corner property last summer after Wells Fargo closed its branch there.

“Construction on the retail center will be market-driven,” Nash said. 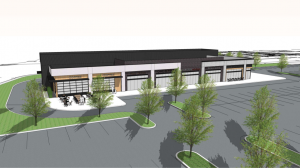 About 11,800 square feet of retail is proposed to rise at the corner of Bethlehem and Staples Mill roads.

Plans call for several retail units to front Staples Mill Road, with parking being set behind the structure.

Gumenick would not release an estimate of investment for the next wave of development at Libbie Mill.

Henrico-based KBS Inc. has been secured as the general contractor to build The Wellsmith apartments. Washington, D.C.-based Hickok Cole is the architect for both the apartment and retail center. E.D. Lewis & Associates served as the civil engineers and Cite Design the landscape architect.

Once The Wellsmith is completed sometime in 2020, Libbie Mill would house 677 market-rate apartments. The development has been approved by right for 1,096 units.

The development’s townhome section also has sold 116 of the 300 planned units since 2016, Finnegan said.

With residential demand growing, Wayne Chasen, Gumenick president and CEO, said retail, which has been slow to take off in the area, is beginning to pick up.

“As more people decide to reside in Libbie Mill-Midtown, we expect to see more retail move into the development,” Chasen said.

Divaris Real Estate Inc. | Richmond has been tapped to represent Gumenick in leasing 54,000 square feet of retail space in the development, including the future 11,800-square-foot retail center.

Work also is underway on Crafted, a new restaurant by Michael Cohan set to fill 6,000 square feet at 4900 Libbie Mill East Blvd., and Burn Boot Camp, which is moving into the ground floor at Penstock Quarter this summer.

Office space on the drawing board

Work also is set to being this month on the redevelopment of the former Southern Season building at 4901 Bakers Mill Lane in Libbie Mill into the new headquarters for Lumber Liquidators.

A $1.4 million permit to convert the building into office space was filed with the county in early March.

The publicly traded national wood flooring retailer announced in August 2018 that it was moving its corporate headquarters from Toano into the 53,000-square-foot building, which was left vacant three years ago when Southern Season closed up shop after less than two years. 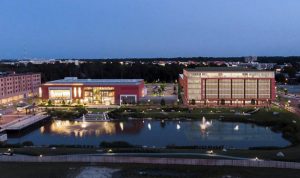 Richmond-based L.F. Jennings Inc. is the general contractor for the project, Finnegan said.

Once completed as expected by the fourth quarter, Lumber Liquidators will house 200 workers in the building.

Gumenick also continues to market Harp’s Landing, a planned six-story, 142,000-square-foot office building set to rise beside Libbie Mill Library, in the center of the project between Staples Mill Road and Libbie Avenue.

Nash said Gumenick is working with Colliers International to find enough tenants for the project to begin construction.

Their optimism is understood since they have been successfully leasing during the worst lease up period of the year. More residential and a large office building will help them in filling that retail space too. Bethlehem Road serves all that office space at the Genworth and that double left will relieve some serious backups that are not the fault of Libbie Mill. Gumenicks townhouses are a must see!

Additionally, they have owned the core of this property for an extremely long time and apartments are their bread and butter. I wonder how many people still remember the Suburban Apartments that stood here. Those things needed to come down and thankfully they ended up following through with their vision of an urban center instead of replacing those Post WWII apartments with suburban garden style apartments. They would not have helped this area out anywhere near as much as this development will in the long run.

They need to widen Bethlehem. There are already two left turn lanes on Bethlehem, so Finnegan’s promise is hollow. The issue is the bottleneck where the last house stood. When I spoke to Gumenick, their answer is that traffic can drive through Libbie Mill. That was in 2014. It’s sad because they seem to have lots of great plans without proper follow through.

Are you sure? I remember Bethlehem having three lanes at the light (left, right, and continuing onto Bethlehem/Wawa) and the turn lanes aren’t long enough which makes the issue worse. From how I read this article there would be four lanes at the light. Two to turn left (Staples Mill NW), one right turn lane, and one to keep going forward for a new increase of one lane.

Henrico changed the center lane to left/straight about a month ago. This has helped quite a bit, but you’re right, the big change would be if they added a lane to make it four total lanes. Now that they can use the old Wells Fargo property.

The evening traffic problem existed even while Libbie Mill was a vacant field. The backup was due to the offices at Genworth. I used to cut across the vacant property to avoid that stoplight at Staples Mill Road. The new road network by Gumenick has relieved the situation somewhat, not acerbated it.

Glad to see improving that intersection is on the list. It’s been a bottleneck for quite some time. I do hope that sidewalks and crosswalks are also on the list.