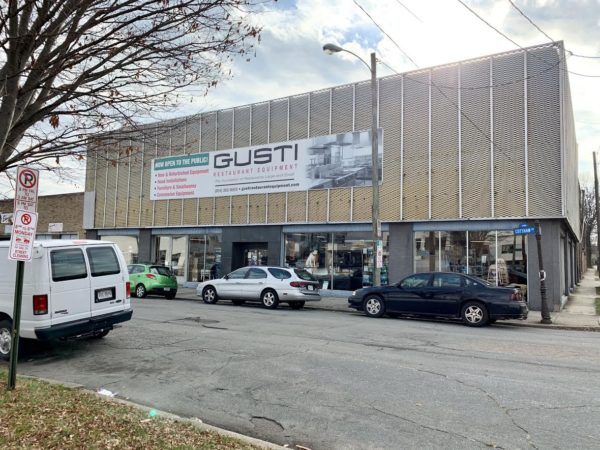 Gusti has been in business for nearly 30 years at 2923 W. Broad St. in the Museum District. The property is part of an 11-parcel site that sold last week for $5.4 million. (J. Elias O’Neal)

One of the largest real estate assemblages across from Scott’s Addition has been sold to a seasoned local developer.

An entity tied to Stephen Leibovic last week purchased 11 parcels totaling nearly 2 acres along the 2900 blocks of West Broad and West Grace streets for $5.4 million, according to a deed recorded with the city. 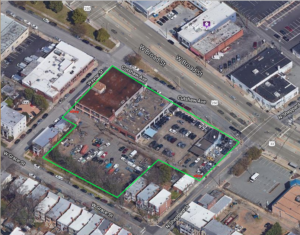 The property highlighted in green sold to Lebar LLC for $5.4 million. (Pollard & Bagby)

The seller was Manuel G. Loupassi, who began amassing the properties in the 1980s.

Combined, the properties most recently were assessed by the city for nearly $3.5 million. Calls to Leibovic and his attorney Hayward Taylor of Taylor, Taylor & Taylor Inc. were not returned Monday afternoon.

No development plans for the sites have been filed with the city.

Leibovic is no stranger to development in the vicinity of North Arthur Ashe Boulevard and West Broad Street. He was part of the group that redeveloped the former Interbake Cookie facility into Cookie Factory Lofts near the Science Museum of Virginia.

Leibovic is also a part of a group that owns the former Interbake Foods warehouse site at 947-949 Myers St., where Spy Rock Real Estate is developing a five-story building with four levels of residential units above ground-floor commercial space.

Loupassi pieced together his neighboring holdings up until the early 1990s.

Back then, there wasn’t much to the area but a few auto mechanic shops, a variety of warehousing and industrial users, and Gusti Restaurant Equipment & Supply, which until a planned move a few miles west remains a tenant at 2923 W. Broad St.

Loupassi, one of the city’s most prolific property owners, decided to sit on the real estate, even as parts of the neighborhood began to decline and businesses started shifting their operations to the suburbs and other parts of the city.

“I already paid for the buildings in cash,” Loupassi said during an event presented by Henrico-based Capital Square 1031 in August 2018. “I was in no rush to part with anything I owned because all I was paying on were the property taxes, and back then, they were low because nobody wanted to be in the city. … The rents I collected covered those and the maintenance.”

That all began to change about eight years ago, as state and national historic tax credits began fueling redevelopment efforts in the city and prospective residents began to find value in city living.

Part of the site, mainly the 2900 block of West Broad, also increased in value after the city in 2017 approved a new zoning district – TOD-1, or “transit-oriented nodal district” – that allows for up to 12-story buildings along the Arthur Ashe Boulevard, Myers Street and West Broad Street corridors that border Scott’s Addition to the east and south.

Loupassi found himself sitting on some of the most valuable real estate at the crossroads of Scott’s Addition and the Museum District — and he knew it, opting to turn down several offers to sell the properties during that time period.

He eventually quietly advertised the property to interested buyers for about a year. The sites later would be placed under contract during the spring. In the meantime, he sold a portfolio of seven apartment buildings for $16.7 million to local businessman and landlord Walid Daniel earlier this year.

With the frenzy of Scott’s Addition development spilling over to the edge of the Museum District, the sites, which also include Edward’s Auto Care, Mike Brooks Auto Repair and an auto storage yard along West Grace, are ripe for new investment.

Gusti Restaurant Equipment & Supply already has made plans to vacate its location in favor of buying its own building just over the Henrico County line, which it hopes to open by spring 2020.

Given the prominence of the block, and its access to bus rapid transit and several walkable entertainment and work options across West Broad, other businesses are sure to follow – opening up the site for whatever Leibovic has in store.

“I’ve been lucky,” Loupassi said during the August 2018 event. “I don’t think anyone could have imagined the amount of (development) happening there now.”

Congratulations to Jerry and the great team at OneSouth. The architecture of the Gusti building is refreshing along that section of Broad, so I hope it stays. If not, I am confident Leibovi will execute a project similar to his existing properties, which are well done.

I hate that building I confess. I tend to doubt it will stay, but it’s probably eligible for tax credits, but who knows.

Refreshing? In an Eastern-block prison sort of way? Have to disagree.

I really hope they retain the old car elevator. Once that added facade comes down, the building certainly has potential to be attractive.

Is that ugly 50s facade added?

Look out…Scott’s Addition is spreading into the Fan. 🙂

Ewww.
Hopefully just along West Broad street and not too far South of that.
I like Scotts, but would really miss the Fan, which is already having it’s character eaten away.

Up, up, up! Go up! Not necessarily too high on the south side of the block, but along Broad Street please use the density afforded the area to do something creative and can leave a positive mark on the area.