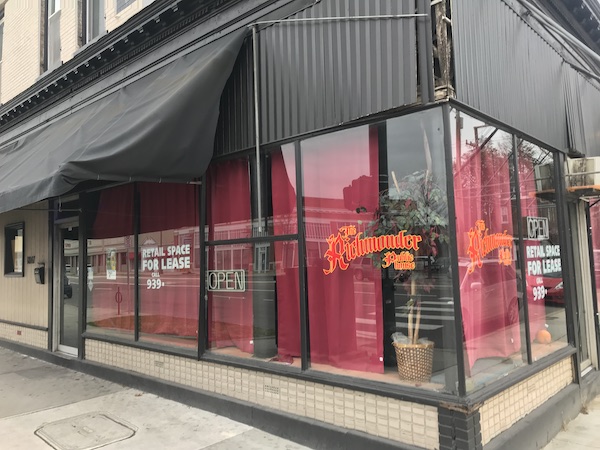 Richmonder Public House closed in late 2019 after a few months in business, paving the way for The Burger Bar to take the spot. (Mike Platania)

A local burger joint operator is taking over the former Emilio’s space in the Fan after the restaurant and live music venue’s successor flamed out last year after a few months in business.

Aisha Farooque, who owns Bottom Burger in Shockoe Bottom, is preparing to open The Burger Bar in the space formerly occupied by Emilio’s and Richmonder Public House at 1847 W. Broad St.

Emilio’s opened in the space in 2003 and went on to add locations in Short Pump and Midlothian that closed in 2012 and 2013, respectively. The Fan location was sold last year to Brandon Jackson and Jonathan Cessna, who reopened the space as Richmonder Public House. The concept didn’t last long, though, with the restaurant closing in late 2019.

Farooque, who opened Bottom Burger about three years ago, said she saw the space was for lease and jumped on it.

“I was just looking for another location and a friend had mentioned it to me as well,” Farooque said. “I called and secured it pretty quickly.”

Bottom Burger will remain open for now, but Farooque said she’s been looking to sell that business.

She said The Burger Bar will use the same recipe as Bottom Burger, but the menu will not be as burger-centric as the Shockoe location.

“I want to narrow down burger selection … and do a similar concept, but add some different items like some small plates to have a little bit more variety on the menu,” Farooque said, adding that it will have vegetarian and gluten-free options.

The restaurant will be open for lunch and dinner, and brunch on Sundays.

“(Brunch) is a big deal in Richmond and I want to be a part of that. I’m working with a chef on a brunch menu,” Farooque said.

She said she’s gutted and renovated the roughly 2,000-square-foot space and is aiming to open The Burger Bar in late March.

“It’s going to be a totally different look. There are people that have been going to Emilio’s for years. I think they’re going to be pleasantly surprised when they go in,” Farooque said.

The restaurant will be next door to bakery Red Cap Patisserie, which opened just under three years ago. It’ll also be catty-corner to several new neighbors filling the Whole Foods-anchored Sauer Center development.

Walk by all the time and not seen a single contractor doing anything. The curtains and dead plants (like the picture) were still there with the lease information, missing some digits, remains in the windows. Missing paneling and rot on the exterior. What did they renovate??

Agreed, so bizarre. No wonder it didn’t make it. Didn’t look like they ever did anything except put some stickers in the window. What are people thinking? Got to bring your A game these days. There is too much competition.

I visited Bottom Burger once a few months ago. Interior is nasty, unfinished, wires hanging everywhere, half the stuff looks like it was left from whatever previous tenant was there. Burger was decent, but will not be revisiting. Does not give me a lot of hope for new location.

This article fails to tell the whole story. Aisha Farooque owns not only Bottom Burger but also the Cornerstone Cigar Bar at the corner of Broad and Allison, which was in the news not too long ago because of this incident: https://www.wric.com/news/broad-street-bar-under-investigation-after-uber-driver-brutally-attacked/ For residents in the area, the Cornerstone has been a major nuisance in other ways, too: DJs till 2am, boom cars driving by all night, dumpsters overflowing in the alley, and cars parked illegally in front of fire hydrants and curb ramps, to name a few. The Cornerstone’s lease ends in October and will not be renewed, according… Read more »

Wow, there were 20 something signatures when i looked at that page for more info…more than ten signatures were added in the time I was reading it.

I would like to point out that I was NOT one of the owners of Emilio’s/The Richmonder Public House.