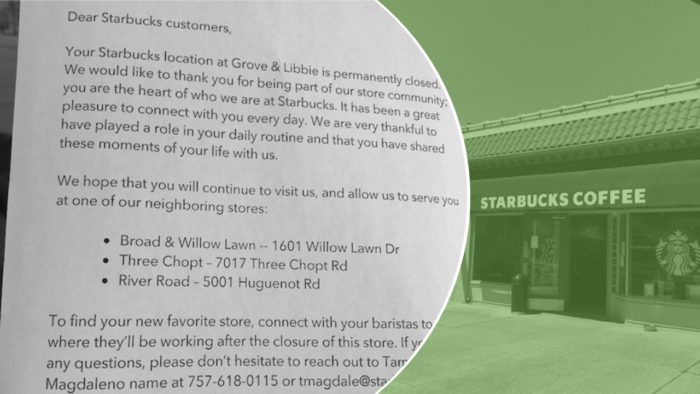 Starbucks had been in the space since 2007. (BizSense graphic; photos by Mike Platania)

A coffee shop in the Libbie-Grove retail corridor has burnt out.

Starbucks has permanently closed its location at 5802 Grove Ave., according to a sign posted on the shop’s door.

“It has been a great pleasure to connect with you every day. We are very thankful to have played a role in your daily routine and that you have shared these moments of your life with us,” the note reads, signed by Tammie Magdaleno, Starbucks district manager. 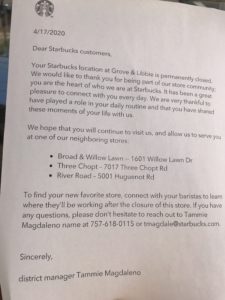 A note posted on the shop’s door explains the closing. (Mike Platania)

Magdaleno deferred comment to Starbucks’s corporate media relations, which did not respond to requests for comment by press time.

Crews were at the Libbie-Grove location clearing out furniture and appliances on Wednesday afternoon.

Starbucks had been in the space since 2007. The building is owned by local developer Charlie Diradour, who earlier this month sold a building in the Fan to another local coffee shop. Diradour also leases to Starbucks in his buildings at 400 N. Robinson St. and 1017 N. Arthur Ashe Blvd.

Diradour was not available for comment by press time.

The closure comes within days of the Seattle-based coffee giant signing on for a new drive-through location at Libbie Mill. It also has a location in the works in Chesterfield, set to rise on the site of a former Pizza Hut in the Rockwood Square Shopping Center.

The coffee shop chain has made a habit of late in Richmond of opening newly built drive-thru locations and doing away with nearby inline storefronts, as it did last year with a new store in Willow Lawn.

The Libbie Grove corridor is set to get a new coffee shop, with Charlottesville-based Grit Coffee signing on to open at 409 Libbie Ave. 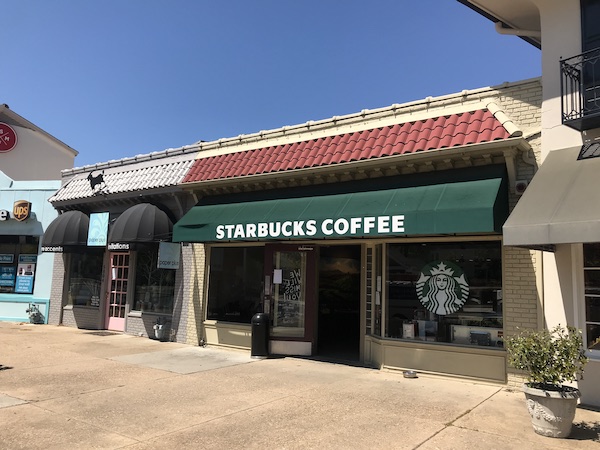 “We will miss you” is written across the Grove Ave. Starbucks’ door. (Mike Platania)

This pretty much really just closing one store and opening another. I have nothing against Starbucks, but i like to see clusters of local companies all together, so Grit is a good repalcement.

Good point. Given the current environment, a drive-thru option is required.

Even before the corona crisis, SBX was moving towards all drive-thru locations.
Pretty much cannot be competitive without a drive thru

That’s not turning customers if you let them buy a cup of coffee and hog a table for 7 hours. Lining up at the drive through 10 deep is much more profit orient driven.

The Sunday morning run groups are going to be upset. Starbucks bottom line, not as much

There’s new construction of some drive-through building on Forest Hill Ave. across from Stratford Hills Shopping Center. There’s a Starbucks across the street in the shopping center. Another replacement? And there’s a vacant Dunkin Donuts down the road a bit, which I believe closed at the beginning of the year.

Yes – that new building on FH will be a Starbucks, and the old location is going to be a Five Guys (at least that has been reported in the past) – I also agree with the other comments, Starbucks needs a drive thru to proceed in the new environment

The old Starbucks on Forest Hill is going to be FiveGuys?? I seriously doubt that as very few Five Guys were opening up new locations before the virus. They closed the location in the main shopping center in 2015 when the franchise moved it to Chesterfield Town Center. With more and more retail closing in that area (look next to Wawa. AT&T closed permanently as did the nail saloon leaving just the Little Caesars) pre-pandemic, i don’t see a lot of new places coming soon. The O’Charley’s has served its last meal.

That’s what was reported… you even commented on it.

In October there was still some restaurants in the area but as I said with this virus marginal places are closing and even larger places doing well are going to look close at opening new locations now.

O’Charley’s locked up and is gone. After over a year that Dunkin space is still closed and on the general retail side CVS finally closed at Gravel Hill Food Loin shopping center.

Maybe they will open but with the changing environment, I just don’t see new retail opening up as we move into a major recession.