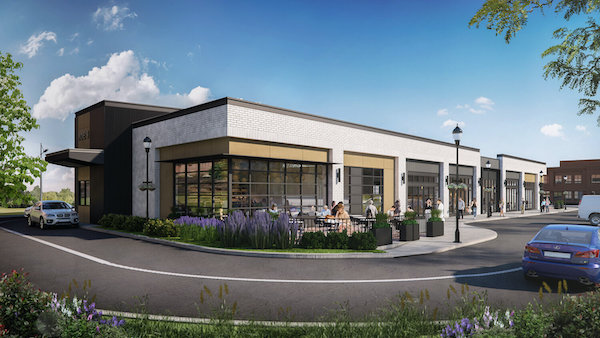 Rendering of the forthcoming building and Starbucks at Libbie Mill. (Courtesy of Gumenick Properties)

Gumenick Properties has landed a big-name tenant for the next phase of its Libbie Mill Midtown development.

Starbucks has signed on to open a store at 2363 Roux St. within the 80-acre mixed-use project.

The coffee giant will occupy 2,500 square feet in The Corner Shops, a forthcoming building that will take shape at the corner of Staples Mill and Bethlehem on the site of a former Wells Fargo bank branch. Gumenick kicked off that phase last year, and it also includes The Wellsmith, a 349-unit apartment building that’s under construction.

“We’re delighted to have them in. … The building Starbucks is going into is about 12,700 square feet,” Nash said. “They’re the lead tenant in that building. The rest is still available for lease.”

In addition to an outdoor patio area, the Starbucks also will have a drive-thru. Nash said the shell of the building is scheduled to be completed in August, and they’re expecting Starbucks to open this fall.

Nash said they’d been in discussions with other prospective tenants for retail space at Libbie Mill, but things have been put on pause amid the pandemic.

“I’d say stay tuned post-coronavirus. The desire is to pick up where we left off,” Nash said.

Other retail tenants at Libbie Mill include gyms 9Round, Burn Boot Camp and Solidcore, and restaurants Shagbark and Crafted. 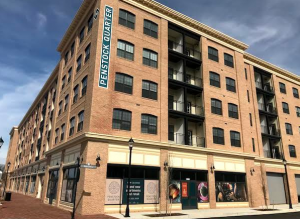 Nash said all of the development’s office space has been leased, led by Lumber Liquidators’ move into its new headquarters in the former Southern Season building last fall.

The Wellsmith is scheduled to be completed in fall 2021.

The Libbie Mill Library, Penstock Quarter and the Lumber Liquidators-anchored office space were the first buildings completed at the mixed-use development.

Along with The Corner Shops and The Wellsmith, work is also underway on a 142,000-square-foot office building next to the library and on 300 townhomes called the Neighborhood of Libbie-Mill Midtown.

I’ve thought a Starbucks would do so well in this location. If think about the nearest Starbucks, they are actually quite far away (for Sbux).
Also, near I-64 and other.

yeah, while Starbucks opening is far from exciting, this seems like a decent location for one.

There is a Starbucks just up the road with a new drive-through at Willow Lawn. That new building is not more than two years old if that. But they should do well between the office workers at the residence and being close to that extremely busy Wawa.