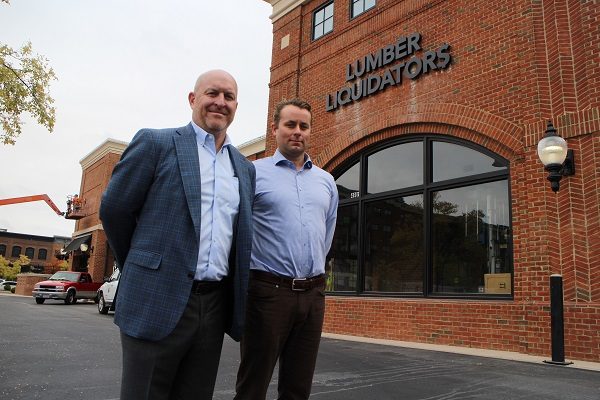 Amid a flurry of activity at its new home base, the newest resident of the Libbie Mill-Midtown development is approaching the finish line on its nearly completed corporate headquarters, filling a building left empty since an original anchor tenant left three years ago.

Lumber Liquidators is putting the final touches on its new HQ at 4901 Bakers Mill Lane, the renovated former Southern Season building that the national flooring retailer is aiming to open by month’s-end. 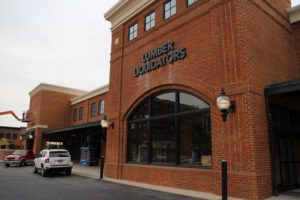 The publicly traded company, which is relocating its corporate offices from Toano, today started moving its first batches of workers into the 53,000-square-foot space, which will house a total of 220 employees. Most of those are relocating from Toano, while 50 are moving over from the company’s offices on West Broad Street and another 10 are coming from its distribution center in Sandston.

The arrivals will revive a building that’s been dark since 2016, when Southern Season closed its foods store and restaurant after less than two years as Libbie Mill’s first commercial anchor tenant.

Shane Finnegan, vice president of construction and development for Libbie Mill developer Gumenick Properties, said the addition of Lumber Liquidators will help balance out the development while also bringing the building back online. 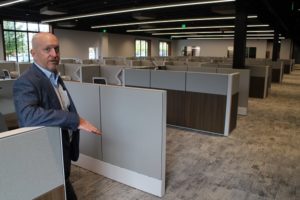 Crowe in of the headquarters’ larger work areas.

“We’re really excited to have 220 new people moving in, to help continue to fulfill the vision that we originally had,” Finnegan said. “We have the housing in place and continuing to be developed, we have the retail environment that is becoming much more robust, and it’s always healthy to have a big workforce population that can supplement the residents that aren’t here during the day.”

Lumber Liquidators’ arrival comes at a busy time for Libbie Mill, which this year finished its first apartment building, is breaking ground on its next one and continues construction on its for-sale townhomes and condos. Plans also are in place for a new office building and additional retail spaces, adding to existing storefronts that are being filled up by recent arrivals such as Burn Boot Camp and Crafted restaurant. 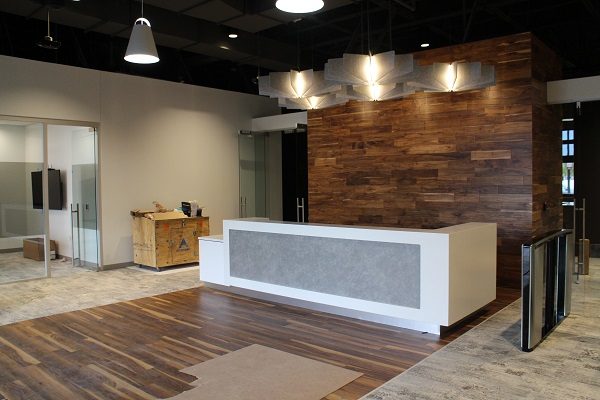 Company products are incorporated throughout the building, such as the lobby here.

Lumber Liquidators’ renovated space, while not open to the public, serves as a showroom of sorts of the company’s wares, with wood flooring and accents, vinyl plank and other products incorporated throughout. It’s an aesthetic that Chris Crowe, vice president of real estate and development for Lumber Liquidators,  described as “resimmercial.” The space was completed by L.F. Jennings and designed by Wendel Evolve.

“It’s meant to be a complement to the types of products that we sell that are intended for the home, so you’ll see a lot of wood tones,” Crowe said. “We have our product in various different spots within the space.”

The space is broken up into different rooms for various departments, all within the building’s previous footprint but with more windows added and other interior alterations. A previous cooking school space has been converted into a window-sided meeting room, and the restaurant space is now the office’s cafeteria, which opens out to the patio. 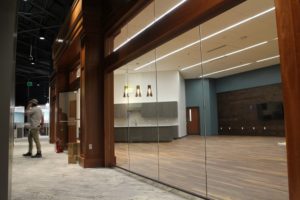 Spaces vary from large cubicle-filled rooms with sit-stand desks to conference rooms and “phone booth rooms” for private calls and work space. Lounge areas with couches are situated to encourage collaboration and teamwork, and several rooms are designated for design and marketing teams to workshop ideas.

The building’s loading dock remains in use, and the company added a generator that Crowe said can power essential operations in the event of a power outage.

Work on the building started in April, and Crowe said they’re aiming to have the building finished in time to hold their first board meeting there in early December. The boardroom is included in a C-suite area that houses executive offices and administrative areas with room to add more people, Crowe said.

Crowe would not say how much the company put into the building. Lumber Liquidators signed a 123-month lease for the space, which replaces its 312,000-square-foot HQ in Toano, the lease for which expires at year-end. The company announced the move in mid-2018. 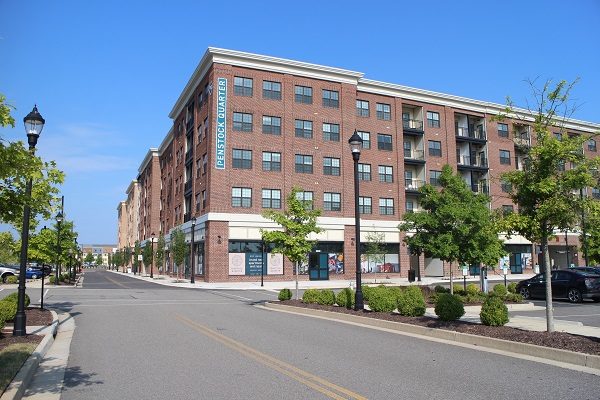 As Lumber Liquidators moves in, other areas of Libbie Mill are likewise on the move.

Site work recently began for The Wellsmith, a 349-unit apartment building that will add to the 327-unit Penstock Quarter, which is over 85 percent leased up.

Preleasing for Penstock Quarter got underway last fall, with the first residents moving in in December. Units range from $1,150 to $2,400 per month, with floor plans ranging from 455-square-foot studios to 1,300-square-foot three-bedroom apartments. 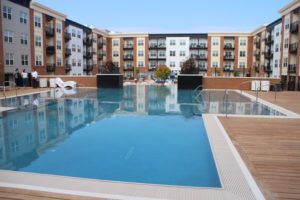 All units include balconies, some of which overlook a 1-acre central courtyard that includes a pool, sundecks, grilling areas, fire pits and outdoor TVs. Other amenities include a two-level parking garage with occupancy signs at each entrance, a pet grooming area accessible from the garage, a bike storage room, additional storage areas available for rent, a fitness center, business center, media room and rentable community room.

Skip Nash, Gumenick’s vice president for property management, said the response to Penstock Quarter influenced the company’s decision to proceed with The Wellsmith, plans for which were filed with Henrico County in April. 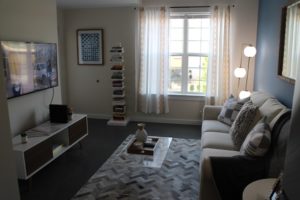 One of the one-bedroom units.

“The leasing activity has been very robust, very strong,” Nash said recently, adding that the building is on pace to be fully leased by December.

The builder on Penstock Quarter was Whiting-Turner, with Commonwealth Architects handling design. Hickok Cole contributed to the design and has been tapped as the architect for The Wellsmith, which KBS will build.

At the same time, construction continues on Libbie Mill’s for-sale townhomes and condominiums, collectively called the Neighborhood of Libbie Mill-Midtown. With more than 100 closings so far, construction is underway on more of the townhome units and the “two-over-two”-style condos, as well as a clubhouse and other amenities planned to be built by next summer. 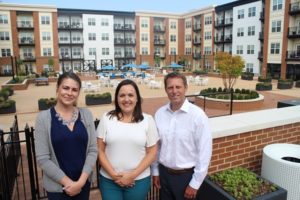 Office on the rise

Also in the works is a six-story, 142,000-square-foot office building planned beside Libbie Mill Library, and a 13,000-square-foot retail center at the corner of Staples Mill and Bethlehem roads, where a Wells Fargo branch once stood. Construction on the retail center is slated to start by year-end, with L.F. Jennings serving as the contractor.

Gumenick has yet to announce tenants for the retail strip, and Nash said the company is in talks with three restaurants and two health or medical users for Libbie Mill’s other available retail spaces, which include 40,000 square feet of ground-floor storefronts in the Penstock Quarter building.

Filling some of that retail space are recent arrivals Burn Boot Camp, 9Round and Solidcore, all fitness brands. Renovations are underway on those spaces, while Crafted, a new restaurant featuring 32 beers on tap, opened this fall, filling 6,000 square feet across Libbie Mill Boulevard from Shagbark restaurant.

With Penstock Quarter’s 327 apartments and The Wellsmith set to add 349 more, Libbie Mill will be more than halfway toward its county-approved total of 1,096 apartments when The Wellsmith opens to residents in 2021. Nash said the next apartments will be different in terms of finish and amenities. 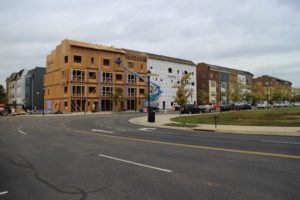 Construction is underway on more townhomes and condos.

“We’re not desiring to build 1,096 of the exact-same apartments. We’d like to see some diversity in the product type, so that’ll be evident in the next apartment building,” Nash said.

Libbie Mill is approved for 996 for-sale homes. Nash said it’s unlikely they’ll end up building that many condos and townhomes by the time Libbie Mill is built out.

“We’re going to run out of land to build condos and townhomes,” he said. “We probably won’t meet that number due to the land.”

Diane Tidwell, property management director for Gumenick in Virginia, said Lumber Liquidators’ addition, on top of the other recent arrivals, is bringing the development into full swing.

“We’ve already had changes in density with Penstock Quarter opening. You feel more people around,” Tidwell said. Referring to Lumber Liquidators, she added, “This is going to change the daily feel of Libbie Mill-Midtown.”

An excellent boost to a good project!

First off, I love the area, even as it’s being built out. The sidewalks, nature trail along the creek, library, and lake make it very attractive. Kudos to them for pumping up an area that was run down for years, then dormant for years. However, the building on the corner of Bethlehem and Staples Mill is at a spot that already has traffic problems. I am very interested in how the builder and the county plan to address those issues. Also, as this place is built out, is it possible that the Pulse Bus could be extended out as far… Read more »

In conversations with the county and Gumenick, both say it’s in their “long-term plan” to address the issues at Bethlehem, however best guess from either is 2024. It seems like it’s a delay tactic, because both groups want the other to pay for it.

Maybe they can buy, incorporate, and reinvent the Willow Place shopping center into Libbie Mill!