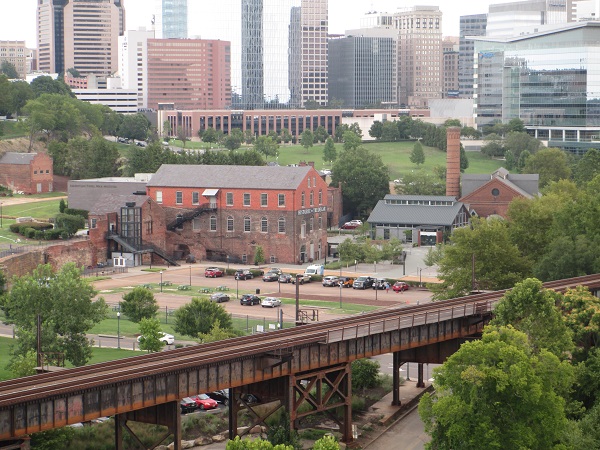 The Tredegar site, as viewed from the Lee Bridge. (Photos by Jonathan Spiers)

As development interest in the area continues to pick up with a new riverfront office building planned nearby, the owner of the historic Tredegar Iron Works property is looking to rezone the site to bring it more in line with the times.

NewMarket Corp., which owns the 9-acre site that now houses the American Civil War Museum and several office users, wants to rezone the property from its current M-1 Light Industrial zoning to DCC Downtown Civic and Cultural District, according to an application filed with the city last month. 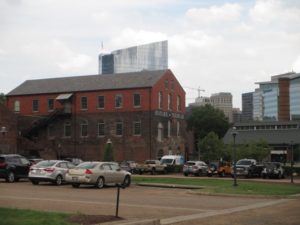 The change would bring the former industrial site in line with its present-day uses, as well as the city’s long-term plans to establish that stretch of the riverfront as a center of civic engagement, adding to nearby attractions such as the Canal Walk and Brown’s Island, both of which are zoned DCC.

Andy Condlin, an attorney with Roth Jackson Gibbons Condlin who filed the application for NewMarket, said the proposal is prompted in part by development interest nearby as well as the nearly completed Richmond 300 plan, an update to the city’s master land-use plan that is headed toward potential adoption this fall.

While he said there is no concern about the Tredegar site being developed, Condlin said rezoning the property would secure its long-term use and add value to neighboring properties that may develop in the future.

NewMarket has said it has long-term plans to potentially develop parts of its hillside campus nearby, and just east of Tredegar, CoStar Group is under contract to purchase 4 acres from NewMarket at 600 Tredegar St., where the real estate data firm is planning to build a new office building. Uphill from Tredegar, the Virginia War Memorial recently completed a $26 million expansion of its campus. 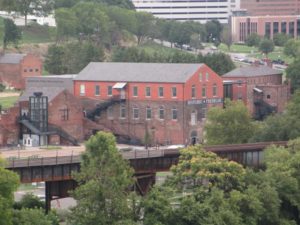 Tredegar was the biggest iron works for the Confederacy during the Civil War.

Rezoning the Tredegar site, Condlin said in an email, “will enhance the value to current and future users on this and surrounding properties by knowing these public, cultural, civic, and entertainment uses will continue on this site.

“This rezoning will allow the continuing development of a true mixed-use campus, consistent with the City’s Richmond Downtown Plan from 2009 and the Richmond 300 Plan, and enhance the value of all the surrounding properties as they continue to develop,” Condlin said.

NewMarket’s Gambles Hill campus includes an 18-acre parcel of undeveloped land between its hilltop headquarters and Tredegar, which it leases to the museum and office users, including the National Park Service and architecture firm 3North.

The hillside parcel, which plays host to the Richmond Folk Festival and where NewMarket filled in its portion of the Kanawha Canal last year, is zoned for residential and office use. Bruce Hazelgrove, NewMarket’s chief administrative officer, has said plans are to potentially develop parts of the campus, though he said such activity remains decades away. 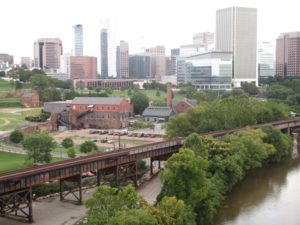 The downtown skyline towers above the riverside site.

The 4-acre parcel at 600 Tredegar St., where CoStar is eyeing a new building, is zoned B-4 Central Business District. The draft Richmond 300 plan suggests downtown mixed-use development for that parcel, while the Tredegar site is marked for institutional use, described in the draft as similar to the DCC zoning.

NewMarket’s rezoning application was filed with the city July 27 and is listed as under review. Engineering firm Draper Aden Associates assisted with the application.

Other rezoning efforts tied to Richmond 300 also are underway. Last week, the city started a process to revise its B-3 General Business district, part of which is found nearby along a stretch of Cary Street near Oregon Hill. Other B-3 properties in nearby Monroe Ward were changed in a city-initiated rezoning last year. 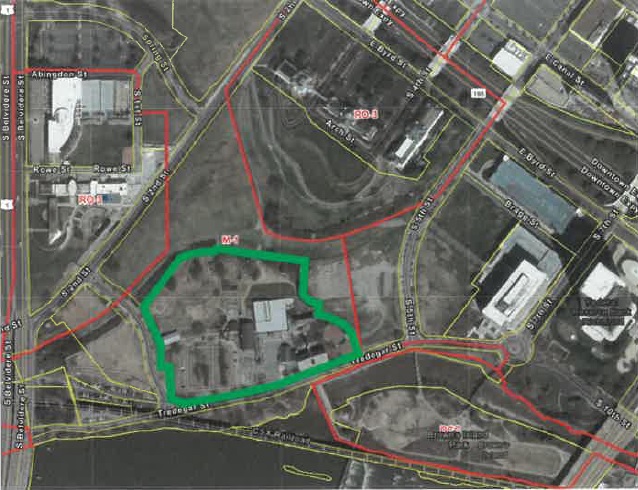 A map showing the site to be rezoned.