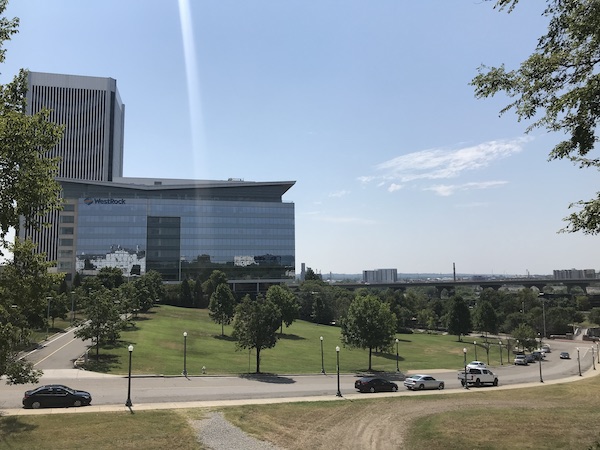 CoStar has about 1,000 employees in the Richmond region. (BizSense file photo)

A new high bar has been set on the per-acre price for land in the city — and it didn’t happen in Scott’s Addition or Manchester.

The downtown riverfront property is roughly four acres, amounting to about $5 million an acre. That eclipses recent highs of more than $2 million an acre in other sought-after neighborhoods elsewhere in the city.

The grassy plot, which sits across from Brown’s Island and adjacent to CoStar’s office at the WestRock building, was most recently assessed by the city at $17 million. The seller in the deal was an entity tied to NewMarket Corp., a publicly traded petrochemical firm that has owned the land for decades.

The deal was recorded by the city on Aug. 17, about a month after BizSense first reported that CoStar had it under contract and was planning an office tower for the site.

CoStar did not respond to a request for comment by press time.

Since arriving in Richmond about four years ago, the commercial real estate data company has planted about 1,000 jobs in Richmond and filled much of the WestRock building. The firm’s headquarters remain in Washington, D.C. 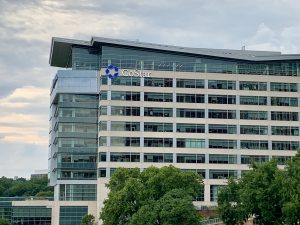 CoStar had previously announced its intentions to occupy a 400,000-square-foot office building in the proposed Navy Hill development, which has since been killed by the City Council.

NewMarket continues to own much of the land surrounding the Tredegar Street plot, including the nearby Tredegar Iron Works site, a 9-acre plot that’s also home to the American Civil War Museum. Earlier this summer, NewMarket filed a rezoning application for the site, a preemptive measure that would make the land’s zoning consistent with the Richmond 300 master plan.

I remember a trip to Richmond when I was an Arlington boy. We were visiting family friends who lived in Midlothian and my dad wanted to see the Capitol. We drove the Nickle Bridge to downtown. I think this was before the Expressway was built. There was this horribly ugly state prison sitting on the hillside overlooking the river which in itself was no great shakes to see either. I thought Richmond was a disgusting smelly city. I held my breath as much as I could. I find it ironic how much I’ve enjoyed the last 25 years living here… Read more »

Bruce, the Nickel Bridge ends at Maymont. The Mayo Bridge would lead you to the state penitentiary on Spring Street just north of the War Memorial. It’s hard to believe that building (and it’s Execution Chamber) was torn down almost 30 years ago.

And there was the “Pop Sign” on Mayo Island. Advertising for Climax ginger ale.

Sorry, the sign was on Browns Island. That should confuse everyone!

Not to be a pain but, “Climax sign that once sat atop Belle Isle”

If I keep trying I may eventually get it right. Thanks Justin. You sir, are correct!

And still off. You both are thinking of the Lee Bridge and Belle Island. Now, that is assuming Bruce is actually talking about the bridge immediately before Libby Prison and did not drive in from the West where Nickel would still make sense.

yes, I suppose we drove down Cary Street from the Nickle, but I was probably 10 years old and too busy holding my nose and hoping I didnt get shot. I recall the prison gates very well. Its funny what images one recalls from youth.

You have no idea how much it costs to live in close to DC. The rents and home values here are half that of Alexandria, Arlington, Bethesda and Chevy Chase. Thats the story of those who move from there to Richmond. The infusion of taxes from areas north of the Rappahannock continues to balance the budget in the Commonwealth.

After growing up here in the ’80’s and ’90’s, I couldn’t wait to escape. I did in 2001 and thought I’d never look back. I returned 6 years ago and am extremely pleased with the progress and strides the communities that make up the city have made.

It’s been fun to watch, but there is a lot more work to go.

What? I was sure between the people rising up and calling foul on all the tax money “needed” to build Navy Hill, plus the terrible terrible riots everyday on Monument Ave, well i was sure no one was going to put one brick on top of another for the next 20 years in Richmond. I’m pretty sure the “looters” have broken every piece of glass between Willow Lawn and the State Capital!! I’t s all those undeirables on that Pulse Bus! (Sarcasm) For all the pearl clutching, Richmond is still a place that people with real money are serious about… Read more »

I hope they build a new set of Kanawaha Canal locks to relink the upper Kanawha Canal to the lower Richmond Canal Walk.

The good news is I sent Costar maps of the historical missing link in the canal system and I plan to release news paper story about how CoStar needs to link the canals back together.

But I really hope they build a 30 or 40 story tall building over looking the new canal locks.

The New Market Corporation might consider it if petitioned. They have some ready cash it seems.

I doubt they bought 4 acres to build a 30+ story building. I imagine Costar’s type of work will require larger floor plates, and fewer of them. As I recall, they were looking at 400,000 sf at the Stoney thing north of Broad. To compare, the new Dominion tower is just over 900,000 sf.So, I’m thinking they will go around 12 stories…but that’s just a guess.