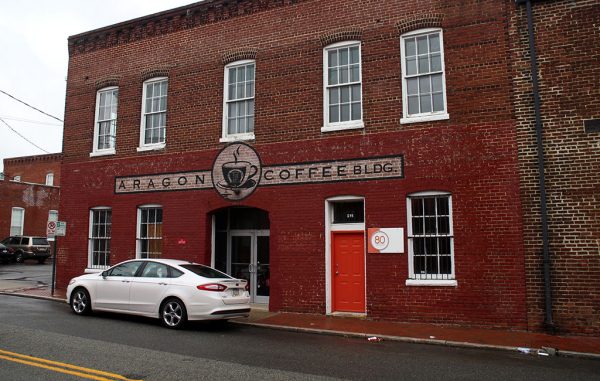 Cornerstone Architects is moving from its downtown office to the Aragon Coffee Building in Manchester. (BizSense file)

A nearly 30-year-old architecture firm is moving across the river as its ownership passes to a new generation.

Cornerstone Architects is preparing to relocate from 23 W. Broad St. in the Arts District to the Aragon Coffee Building in Manchester. It has signed a lease for 6,800 square feet of space, slightly more than its current office footprint downtown.

The pending move coincides with a change in company ownership, as longtime associates Erik Quackenbush and Charles Selden have taken the helm of the firm from Rick Peterson and Richard Morse, who co-founded Cornerstone with Jonathan Kucera in 1991. 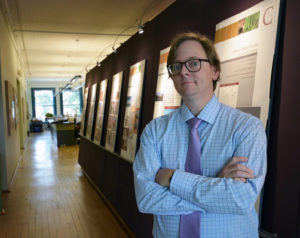 Selden, who with Quackenbush became partners with the firm in 2017, said the transition had been in the works for some time as Morse and Peterson looked ahead to retirement. Morse announced his retirement a year ago, and Peterson followed suit in early August.

“This is just a generational shift of the firm, and we’re just taking over the role,” Selden said of the ownership change. “It is just the two of us (as owners/partners) for the time being, but there are probably going to be some more partners involved eventually.”

Peterson, who will remain involved with the firm in an advisory role, said the time was right to pass the reins to Selden and Quackenbush. He said the two, along with interior design director Amanda Monger, had upped their leadership roles with the firm in recent years. Peterson said Monger may also become a partner when the time is right. The ownership change took effect Aug. 1. 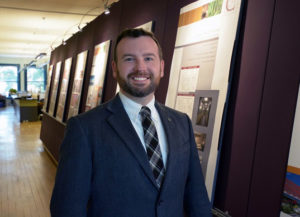 Peterson said the firm hired a business consultant and coach who walked them through a strategic planning process to plot out the transition.

“That showed all four of us that we were on the same page in terms of business model and strategy, customer service value and design value,” he said. “That gave us the confidence to go through with that process.”

The firm’s decision to move came as their lease at 23 W. Broad was coming up for renewal. Peterson, Morse and Kucera rehabbed and previously owned the building through their RJR Properties, before selling to SNP Properties for $3.4 million in 2018. 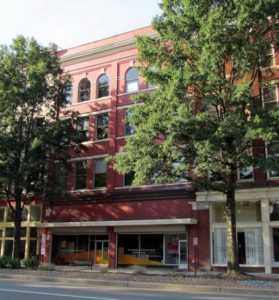 Cornerstone was an anchor tenant of 23 W. Broad St., which its co-founders rehabbed and later sold. (BizSense file)

Selden said discussions with Cornerstone’s original landlord, Lowell Smith, led them to the space in the Aragon Coffee Building, which is owned by Smith’s Aragon Group. Describing the space as a more cost-effective opportunity, Selden said Cornerstone signed a multiyear lease for the space, which spans the first and second floor on the south side of the building.

“Lowell was our first landlord when the firm started on Hamilton Street in upper Scott’s Addition, and he had maintained a relationship with both Rick and with Erick and I,” Selden said. “Just on a whim, we asked him if he had any leasable area that was available, and he showed us a space we fell in love with.”

While the lease allows the firm to take occupancy in December, Selden said they’ll be doing a soft move in next spring, based on employees’ comfort levels. He said Cornerstone’s 12-person staff has largely been working remotely during the pandemic.

Their move comes amid a recent trend of some of Cornerstone’s peers purchasing their own office space, such as Poole & Poole Architecture and downtown neighbors ArchitectureFirm and Architecture AF. Selden said he and Quackenbush were more comfortable continuing to lease in light of the pandemic.

Busy during the pandemic

Despite COVID’s impact on some of the industries it serves, Selden said Cornerstone’s workload has largely held steady, primarily in the assisted living sector, which he described as the firm’s bread and butter. Clients in that field include Westminster Canterbury and Henrico-based Pinnacle Living, whose properties include Cedarfield and Hermitage Richmond.

“We were expecting to see a slowdown, and it didn’t really occur,” Selden said. “I was worried about multifamily, which we have done a fair amount on with Waukeshaw Development and Dave McCormack, but he didn’t seem to think there was a real issue there, so he’s been full speed ahead.

“The institutional clients and industrial clients seemed like they’ve held pretty strong. We were looking into doing some amusement park work at one point, and obviously that has been put on hold.” 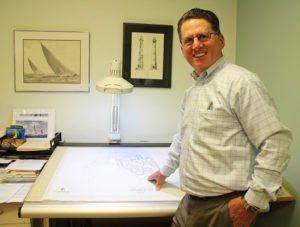 Selden said the firm aims to bring in about $2 million in annual revenue, which he called an aspirational goal that fluctuates year to year. Current projects include designing Salvation Army’s new headquarters in Northside, as well as work for Westminster Canterbury and some Pinnacle Living properties in Northern Virginia.

As for Peterson, who turns 70 next year, he’s in the process of relocating to Deltaville, where he plans to open a private practice while continuing to pursue his love of sailing.

“I’m going to be working part-time, sailing part-time,” Peterson said, adding that his Deltaville practice would maintain a line with his former firm.

“I would associate with them on other projects that I would be involved in,” he said. “I look to maintain a relationship with the firm for years to come.”

Architecture seems to be an industry plagued by either big egos or small imaginations, but Cornerstone seems to have found the secret to striking the right balance between practical and visionary. Solid work with style, executed with a pragmatic sensibility. Best of luck to the team as they embark on the next chapter.

I have to be a pedant here and point out the Hamilton Street is in no way part of Scott’s Addition. Wrong side of 195

yes it is. it continues under 195 and becomes part of scotts to the north, up by SPARC. Congrats on the move Erik!

Congratulations y’all! That will be a great move, even if you’ll be missed in the neighborhood.