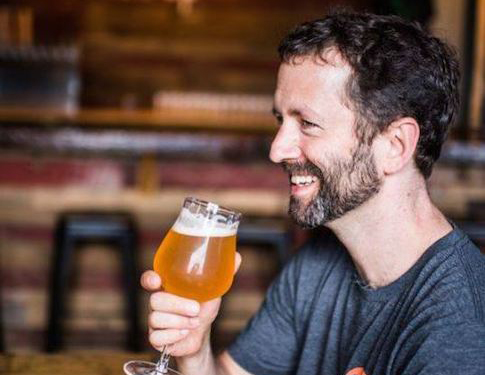 A brewery with roots in Hampton Roads is planning to pour into Richmond.

Norfolk-based Benchtop Brewing Co. has signed a lease to open a 2,600-square-foot taproom in The Current, a forthcoming development from Lynx Ventures at 400 Hull St. in Manchester.

Tennant said Benchtop had actually been working on a lease for a taproom in a different region in Virginia prior to the pandemic, but then decided to instead reinvest in Benchtop’s brewing equipment. 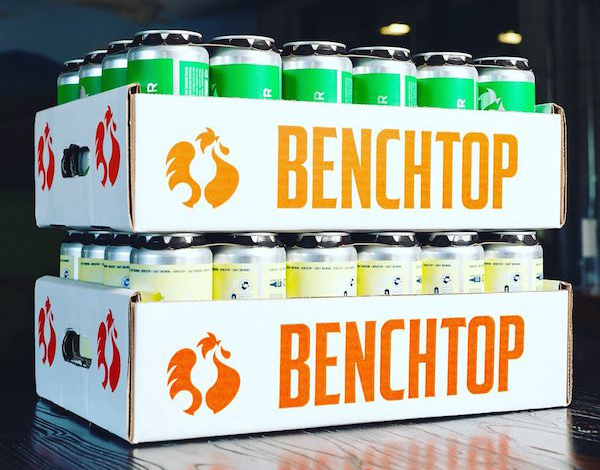 Weekly can releases are planned to be part of Benchtop’s Manchester operation.

He said they restarted the search for a new home last fall, and acted quickly to get into Manchester, a neighborhood he said he didn’t know much about.

“Richmond was a natural fit because we distribute a good bit of beer there already. (But) I didn’t know what Manchester was, honestly. I knew more about Richmond in general just from visiting,” Tennant said.

“When we came to Manchester, it was a no-brainer with the proximity to people. We loved the idea of being someplace where we can get foot traffic.”

Tennant started the brewery in 2016 after he got into homebrewing during his 15-year career in the food science industry. He said he was applying similar processes to beer as he was in his day job and eventually went off the deep-end of brewing at home.

“I decided to cash my chips in and open the brewery in late 2016, but it took me two or three years to get to that point,” Tennant said. 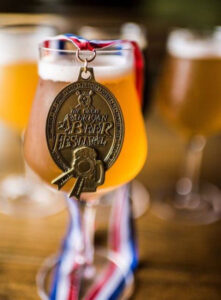 Benchtop won a gold medal for best gose at the Great American Beer Festival in its first year in business.

Barely a year after opening, Benchtop got a boost in notoriety when its oyster gose dubbed Mermaid’s Scorn — one of its three original beers — was submitted for consideration at the Great American Beer Festival, a national competition held by the Brewers Association.

When the gose was announced as the gold medal winner at the Denver-based festival, Tennant was back in Norfolk, tending to his then six-month-old brewery that he runs with his wife, Talia.

“We were not expecting to win, needless to say. I was here brewing on a Saturday and listening to it, streaming it. People were like, ‘I can’t believe you weren’t there.’ I was like well, we’ve got beer to make,” Tennant said. “(That was) kind of what got us on the map, if you will.”

Benchtop has continued to make a lot of goses, but has developed a focus on IPAs. Tennant said Proven Theory, Benchtop’s flagship IPA, outsells all of its other beers two-to-one, but he added they’ve been delving into another style lately.

“In the last six months we’ve turned the corner and started applying our hyper-focus on detail to lagers,” Tennant said. “We’ve identified that as an area for growth in craft beer.” 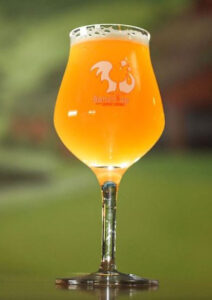 The brewer’s flagship IPA, Proven Theory, is its most popular brew.

Of the 12 taps planned for Benchtop’s Richmond location, Tennant said four of them will be dedicated to lagers and the remaining eight will rotate. The taproom will also serve food and a local cider as a gluten-free option.

Tennant said he’s still working on what the food menu will look like, and that the Richmond taproom’s brewing system will be quite a bit smaller than the seven-barrel brewing rig Benchtop runs in Norfolk.

Benchtop has been doing weekly can releases in Norfolk, something Tennant said they’ll bring to Manchester. The brewery’s distribution footprint includes Richmond, Northern Virginia, D.C., and some parts of Maryland and North Carolina. It uses Reverie Distribution in Richmond.

In the year prior to the pandemic, Tennant said Benchtop brewed about 1,500 barrels, or 46,500 gallons.

“We produced 25 percent more last year than the year prior. Our margin was lower, but we canned a lot of beer. That kept us afloat,” Tennant said. “This year we’re on track to increase by 25 to 30 percent. It’s been steady growth for us from the beginning.”

Adding to The Current’s tenant roster, Benchtop will open adjacent to Hatch Local, a food hall which has been gradually filling out its roster this spring. 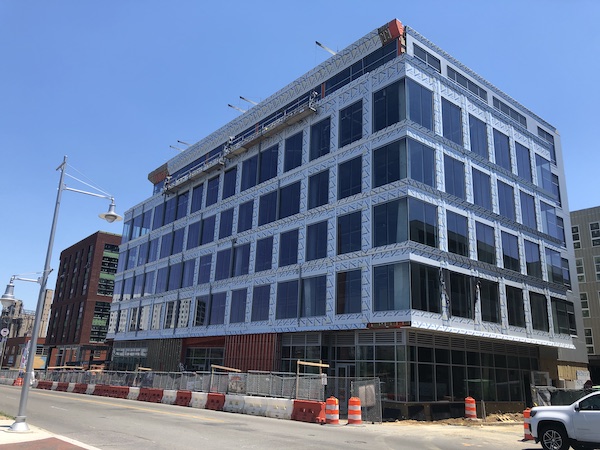 Lynx Ventures’ The Current recently signed its first residential leases with plans for tenants to move in in July. (Mike Platania photo)

Lynx Development Manager Kate Hosko said she thinks Hatch Local and Benchtop, along with the forthcoming Continental Manchester and Stella’s Grocery across the street, will help turn Hull Street into more of a destination.

“Zooming out some, we always imagined (the Current) to be a node of activity along Hull Street,” Hosko said. “We think it’s going to be a really cool place for people to use as a jumping off point to explore the rest of Manchester.”

Hosko said about 3,500 square feet of retail space remain at the Current, and leases were recently signed for some of the development’s 215 apartments.

In March the development landed its first office tenant with West Creek Financial, which is relocating from Innsbrook. Hosko said about 24,000 square feet of office space remains available at the project.

Thalhimer’s Annie O’Connor and Reilly Marchant worked the deal for Benchtop. Raleigh-based Smith Sinnett Architecture will design the brewery’s space. Tennant said they haven’t yet selected a builder for the renovations.

I’m so happy for The Lynx teams success at The Current. Their effort to bring commercial uses to Manchester, an effort with a great deal of risk, is proving itself and rounding out the community’s growth. There will be an explosion of residential growth there over the next three years as a continuum of that we’re seeing from the river to Commerce Avenue along Hull Street. Last week, the RTD ran an exceptional article about the changes taking place on Cowardin and Semmes Avenue, including more opportunities for home ownership, an element necessary for neighborhood stabilization.

I’ve liked Benchtop, and look forward to trying more of it. I think this will be good for both them and Manchester. For the number of apartments Manchester really needs more retail and entertainment spaces.