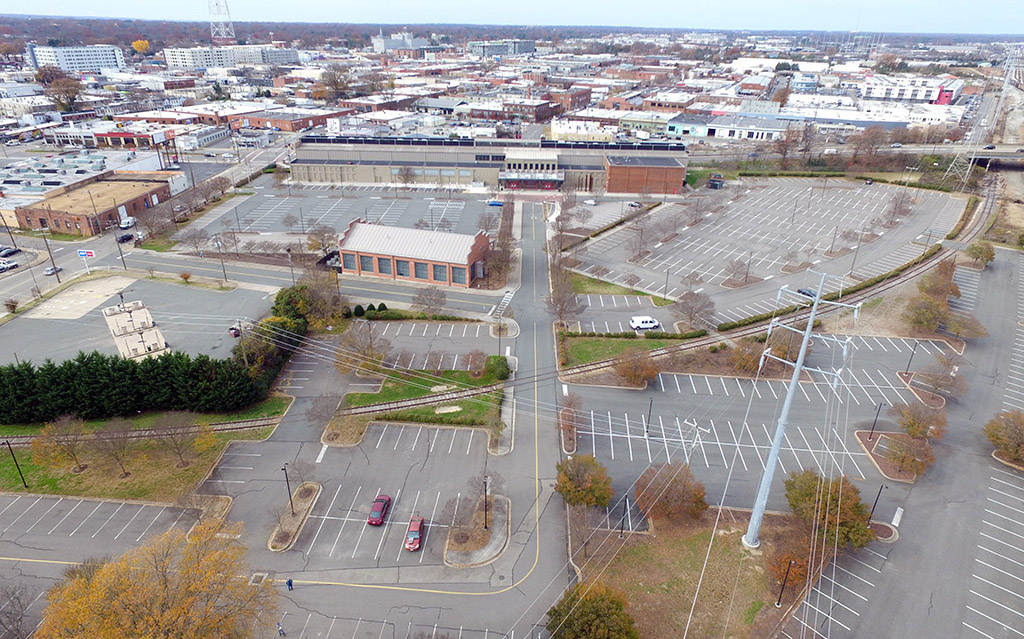 The Bow Tie Cinemas property at Boulevard and Leigh with the Movieland At Boulevard Square theater in the distance. (BizSense file photo)

Forced back to the drawing board after not making the cut in the city’s casino competition, the owners of the Movieland At Boulevard Square property aren’t giving up on the idea of bringing a new development to at least part of the site.

He said it is looking at ideas that would include the existing movie theater, which sits on 11 acres at 1301 N. Arthur Ashe Blvd.

“We’re looking at that land to see what else would fit and work with our entertainment business,” Masher said. “I don’t even know at this point in time what we’d put there but we’re looking at a bunch of different types of concepts.”

Bow Tie’s 17 total acres had been the proposed site of Baltimore-based developer The Cordish Cos.’ pitch for a resort casino, before Cordish’s proposal was bested by that of Urban One’s plan on the Southside.

Cordish made its bid for the Bow Tie land after the movie theater operator put it on the market last year prior to the issuance of the casino request-for-proposals.

Masher said they’re now potentially looking to develop the land themselves, but would not specify whether it’s still fielding offers for the land. As of last week, the 17 acres was still listed for sale with CBRE.

The Bow Tie site would be among the largest pieces of available land in Scott’s Addition, particularly adjacent to the neighborhood’s Historic District. The land is zoned TOD-1 Transit-Oriented Nodal District, which allows for mixed-use projects up to 12 stories, and the city most recently assessed it at $20.9 million. 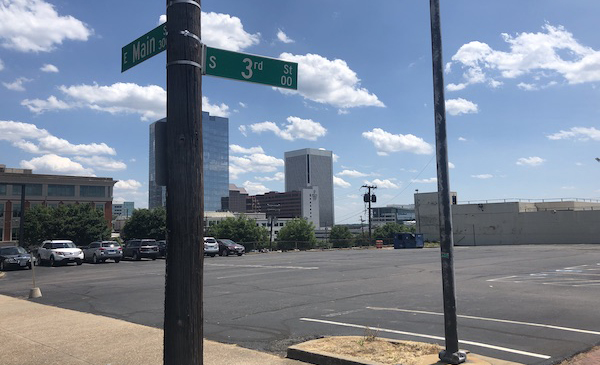 Bow Tie also owns an entire city block downtown, but it’s unclear what its plans for that are. It is currently a parking lot. (Mike Platania photo)

Referred to on its website as “Jefferson Square,” Bow Tie describes the downtown parcel as a future development site but does not list any specific plans for it. City records show an entity tied to Bow Tie bought the land in 2005 for $3.1 million.

Masher wasn’t immediately available for a follow-up question regarding the downtown lot, but he previously said that Bow Tie is looking at “various concepts for different buildings all over the place, all over our portfolio.”

Prior to the casino RFP, Bow Tie had been looking to add a drive-in theater to its parking lot at Movieland. But those plans were scrapped last month. Masher said they would not have been able to secure a special-use permit from the city in time to make it financially feasible.

“It became very apparent as we moved along in the project that we would not be able to open by Memorial Day weekend and that was crucial to our operating pro forma,” Masher said. “That’s kind of the kickoff of the summer movie season.”

While Bow Tie mulls a post-casino RFP future, the other would-be casino locations in the city also are up in the air.

The Pamunkey Indian Tribe was the first operator to publicly express its interest in building a Richmond casino in early 2020. The tribe proposed building on an industrial site a mile east of Urban One’s at 5000 and 5030 Commerce Road.

“The property is currently undeveloped, and until the tribe decides how to best use that property, it will stay undeveloped,” Smith said in an email.

Wind Creek Hospitality, the entertainment arm of the Poarch Band of Creek Indians, pitched its casino plan for a 47-acre industrial site owned by local developer Harper Associates at 1220 and 1260 Ingram Ave.

Harper’s asset manager Will Allen declined to comment on the company’s plans for the Ingram Avenue land.

Lastly, the site that was pitched by both Bally’s Corp. and Golden Nugget is at the intersection of Powhite and Chippenham parkways.

Several large acreage in-fill sites have been identified as future developments. They will not become casinos, so what becomes of them? Two of those are in a burgeoning Manchester area south of the James that could use a Class A “suburban style” retail development at some point. Perhaps that model has expired though, and they will become mixed use high density development sites. The Arthur Ashe location will develop “organically” in that its an extension of all that is happening in Scotts Addition. That site will develop first among all of them. The more difficult one to predict might be… Read more »

You know what they say… “When God closes a door, He opens a window.”

I’d love to see Bow Tie Partners bring further development to their site. They did an amazing job with the theater complex, and I fully expect anything else they do would be world-class.

I’d hate to lose the only in-person movie theater within the city limits. Bow Tie has done a great job; would be a loss for RVA. An outdoor music venue or event space would be fantastic.

Don’t forget about the oldest, original, in-person theater within city limits in Richmond, The Byrd Theatre. Soon to be adding a second screen on the side of their building to be watched on the rooftop of the New York Deli. Check out Richmond Biz Sense’s article about it or our website to see more.

It is not the only “in-person” movie theatre in the city…you are forgetting the Byrd.

Also don’t forget Cinebistro at Stoney Point. A little far out there, but still in the City.

The Byrd is fantastic, but it is a single screen, second run and repertory movie theater. Kind of an apples to oranges comparison. Cinebistro is a closer comparison, but still not the same thing…

So This developer needs to channel its creative measures to that of charlotte NC . In uptown charlotte they have what us known as the epicenter it’s and open air concept entertainment crown 👑 jewel of the city . Entertainment Amphitheater that is surrounded by hotels with in the structure, bars, restaurants, fashion stores, pharmacy, etc and it sits perfectly within the uptown (downtown) vibe and feel . So make that whole city block downtown a entertainment metropolis because richmond is still missing those elements down town

I have heard that the epicenter has been having big troubles in the past few years – high crime, tons of vacancy, evictions, in default of loans. Maybe it’s too soon to declare the epicenter a resounding success.