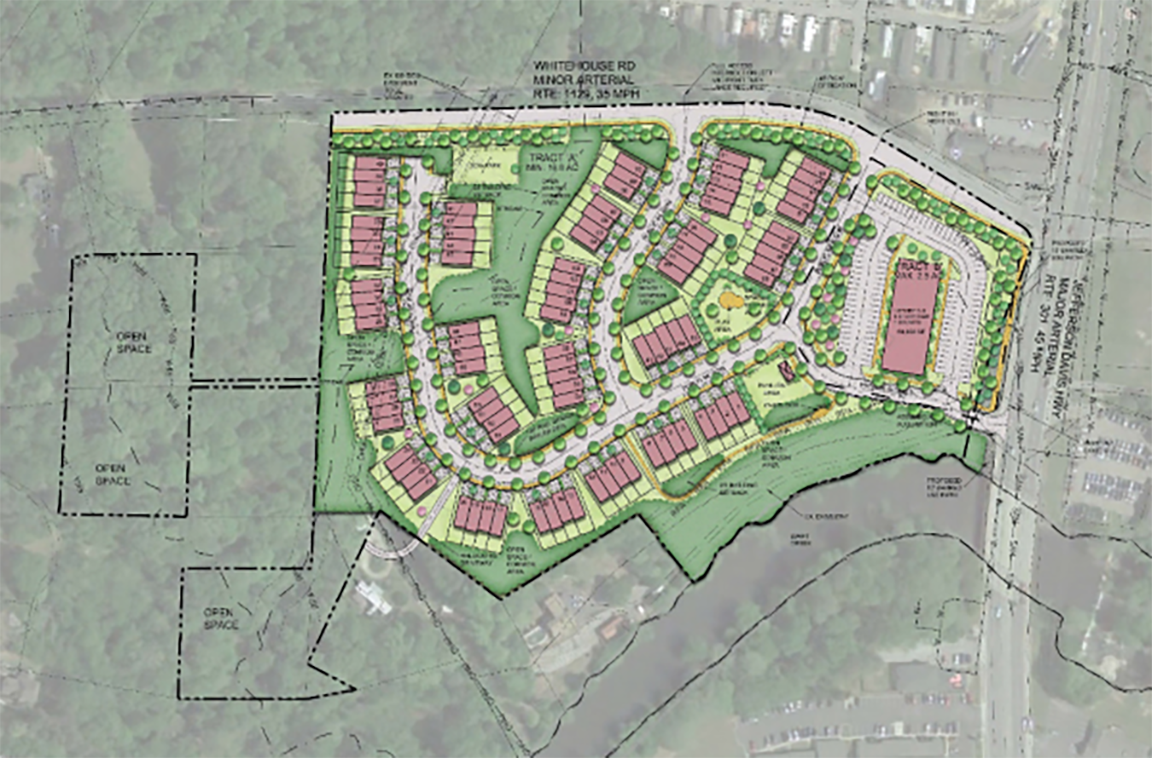 The Chesterfield County Planning Commission will consider a mixed-use development on 19 acres at the southwest corner of Route 1 and Whitehouse Road, just north of Colonial Heights. (BizSense file)

Business on the 6 p.m. regular session agenda includes a proposed ordinance selecting RVA Entertainment Holdings LLC as the city’s preferred operator for Urban One’s proposed casino at 2001 Walmsley Blvd. and 4700 Trenton Ave. The ordinance also would initiate a required voter referendum on the casino to be held in November.

Hourigan Development seeks a rezoning for the Southern States silos site at 2-4 Manchester Road, where it plans to raze the vacant silos to make way for a mixed-use development. Zach Kennedy requests a special-use permit at 1005 Westover Hills Blvd. to build a three-story building with 12 dwelling units above ground-floor commercial space. The Planning Commission supported both requests last month.

International Mission Board seeks a special-use permit to develop a 263-unit apartment complex on land it owns across Hamilton Street from its headquarters at 3806 Monument Ave. Stoplight Gelato Cafe seeks special-use approval to allow Richmond Seltzer Co. to install a small-batch brewing operation in its space at 405 Brook Road.

Other business includes a previously deferred request for TOD-1 zoning at 1801 E. Main St. An entity called 1801 E Main LLC purchased the half-acre plot in November. The council plans to defer to June 28 a special-use request for a warehouse at 501 Oliver Hill Way that would allow such uses as a brewery, distillery, manufacturing, and food and beverage distribution.

The council also will consider an amendment to an ordinance adopted in February that allocated $500,000 from the city’s fund balance excess for renovations to the former deli space on the first floor of City Hall. The space is now planned to be used as a community resource center for city residents experiencing a housing crisis, and potentially an RVA Financial employee credit union branch.

The recently adopted Richmond 300 master plan was awarded the 2021 Daniel Burnham Award for a Comprehensive Plan from the American Planning Association. The award recognizes an innovative plan that helps create a more prosperous and equitable community for current and future residents and raises awareness of the importance of planning.

According to a release from the Richmond 300 team, the award is the biggest recognition that urban planning professionals can receive in their careers. More on the plan and award can be found here.

The 250-page document, meant to guide growth through the city’s tricentennial in 2037, was developed by city planning staff and consultants from national engineering firm AECOM. The years-long effort was overseen by an advisory council and was led by former city Planning Director Mark Olinger and Richmond 300 project manager Maritza Pechin.

Henrico supervisors last week approved rezoning and permit requests for John Rolfe Mews, the reworked proposal from Rebkee Co. and Main Street Homes for 81 townhomes and 6,000 to 8,000 square feet of commercial space on an 8-acre site at the convergence of John Rolfe Parkway and Pump and Church roads.

The board also rezoned 11 acres on the west side of Pouncey Tract Road south of North Gayton Road, where North Gayton Village LLC is planning an age-restricted detached condominium development.

On the docket is a rezoning and conditional use plan of development application filed by Swift Creek Vistas LLC for a mixed-use development on 19 acres at the southwest corner of Route 1 and Whitehouse Road, just north of Colonial Heights.

Among agenda items is a request by a group including Mark Giragosian to amend a conceptual plan and proffers to add another 48 townhomes to the Chickahominy Falls subdivision.

The new townhomes would be built on 14 acres at the southwest corner of the Cedar Lane and Holly Hill Road intersection. The subdivision’s total unit count would increase from 404 units to 452 units with the change.

The Powhatan County Planning Commission voted last week to recommend a proposal to add a designation in the zoning ordinance to permit small-scale specialty food and beverage production facilities.

The designation would refer to small-scale production of specialty foods and non-alcoholic drinks for on-site retail and wholesale sales. The designation wouldn’t permit on-site dining. While the county has zoning rules on the books for home-based or large industrial food production, operations that fall between those categories don’t currently have a clear-cut home in the ordinance.

The proposed zoning ordinance would create the Artisan Food and Beverage Production designation as well as related standards and make the use by-right in commercial, mixed-use and industrial districts. The proposal now goes to the Board of Supervisors, which will decide whether to add the proposed use to the zoning ordinance later this month.