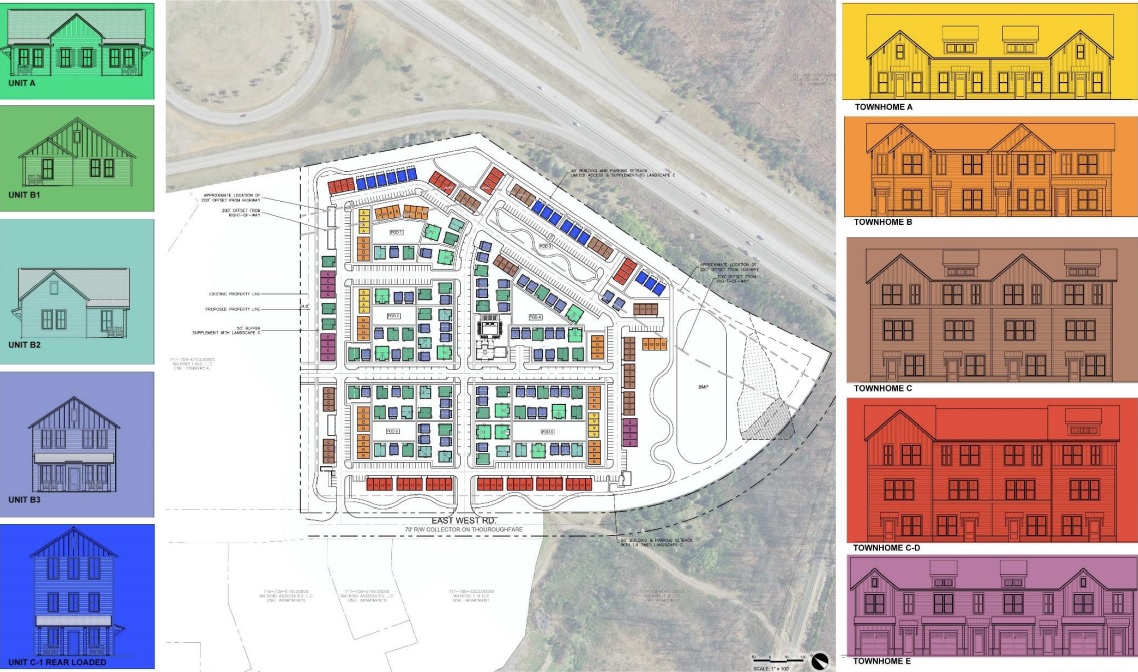 On deck is a proposal by Watkins Land LLC and Middleburg Real Estate Partners to set the stage for 283 townhomes and single-family homes at Watkins Centre, a mixed-use development taking shape near Westchester Commons.

Dubbed the Hamlet at Watkins Centre, the new housing would be geared toward renters and sit on a 69-acre site at 631 and 701 Watkins Centre Parkway, according to a staff report. 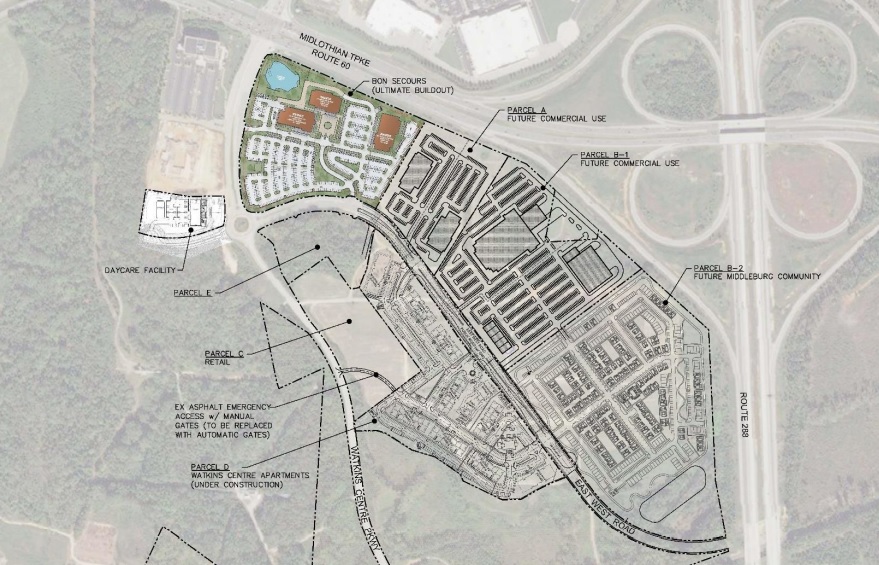 A master plan of the larger Watkins Centre development.

The proposal comes as work continues on the first residential piece of the development, a 450-unit apartment complex by Charlottesville-based Castle Development Partners.

Also on the agenda is an update on the River City Sportsplex master plan, which suggests $48 million in improvements to the facility, as well as an update on the Genito/288 Special Focus Area plan, a draft land-use plan for the area surrounding River City.

Two projects with more than 1,200 homes in Chester up for votes

The Chesterfield Board of Supervisors is slated to meet Wednesday. Full agenda here.

For the board’s consideration is a rezoning request from Emerson-Roper Cos. to build up to 830 residential units and commercial space north of the Route 1 and Route 10 intersection in Chester.

The project, called Moore’s Lake, would be built around the 385-unit apartment complex The Jane at Moore’s Lake. The proposed Moore’s Lake development would feature 500 apartments, 30 townhome lots, 62 single-family lots and 238 two-over-two units.

Also for the board’s final verdict is a 390-unit apartment complex proposed by Lingerfelt Development, which would be built not far away on land just south of the Route 1 and Route 10 intersection near Breckenridge Shopping Center. The apartments would rise on a 17-acre site on parcels at 12801, 13001, 13013 and 13007 Briggs Road, and at 2407 and 2221 W. Hundred Road.

Together, the two projects would add more than 1,200 new residential units to the area.

Voters in Goochland County approved two bond referendums for a total of up to $96 million for several capital projects earlier this month.

The referendum set the stage for the county to issue up to $60 million in bonds to build an elementary school, renovate middle and high school buildings and make improvements to roadways and parking lots at the facilities.

Design on the elementary school is underway and the school is expected to open in fall 2024. High school improvements are slated to begin in fiscal year 2025, the county said in a new release last week.

A separate referendum that was also approved by voters gave the county the green light to issue $36 million in bonds to build a new courthouse and a fire station.

At its meeting last week, the Henrico County Planning Commission supported a request from Stanley Martin Homes to rezone multiple parcels totaling about 4 acres northeast of the intersection of Scott Road and Scott Place as part of its ReTreat at One development. The land is adjacent to an expansion of the 600-home development that’s taking shape between Brook Road and Interstate 95 north of Parham Road.

Commissioners supported a rezoning but deferred a provisional-use permit request for a mix of condos and retail at 12120 W. Broad St. in Short Pump. Developer Rebkee’s latest proposal calls for 94 condos and between 40,000 and 75,000 square feet of commercial space on the 12-acre site.

The commission again deferred votes on Eagle Construction of VA’s 1,600-home Avenlea development and Edward Rose & Sons’ plan for 325 apartments near the Rebkee site. Those cases were likewise deferred to the Dec. 9 meeting.

Homebuilder D.R. Horton withdrew its request to rezone 420 acres in Varina for a subdivision totaling 770 homes. The site, about two miles east of the Route 5/I-295 interchange, was previously proposed by Atack Properties as The Ridings at Warner Farm subdivision. D.R. Horton’s project would have added 120 residential units and eliminated a commercial section that was included in the earlier plan.

The Richmond Planning Commission meets Monday at 1:30 p.m. Full agenda here. Business on the consent agenda includes an ordinance declaring surplus and directing the sale of a portion of city-owned land at 1111 Fourqurean Lane, where Commonwealth Catholic Charities is planning a development with 56 income-based apartments.

The commission is scheduled to review a special-use permit request from Virginia Union University to allow its “VUU” signage to remain on its campus belltower. The illuminated signs were placed without required city and state approvals, and an agreement between the university and the state was in the works when the request was deferred at previous meetings.