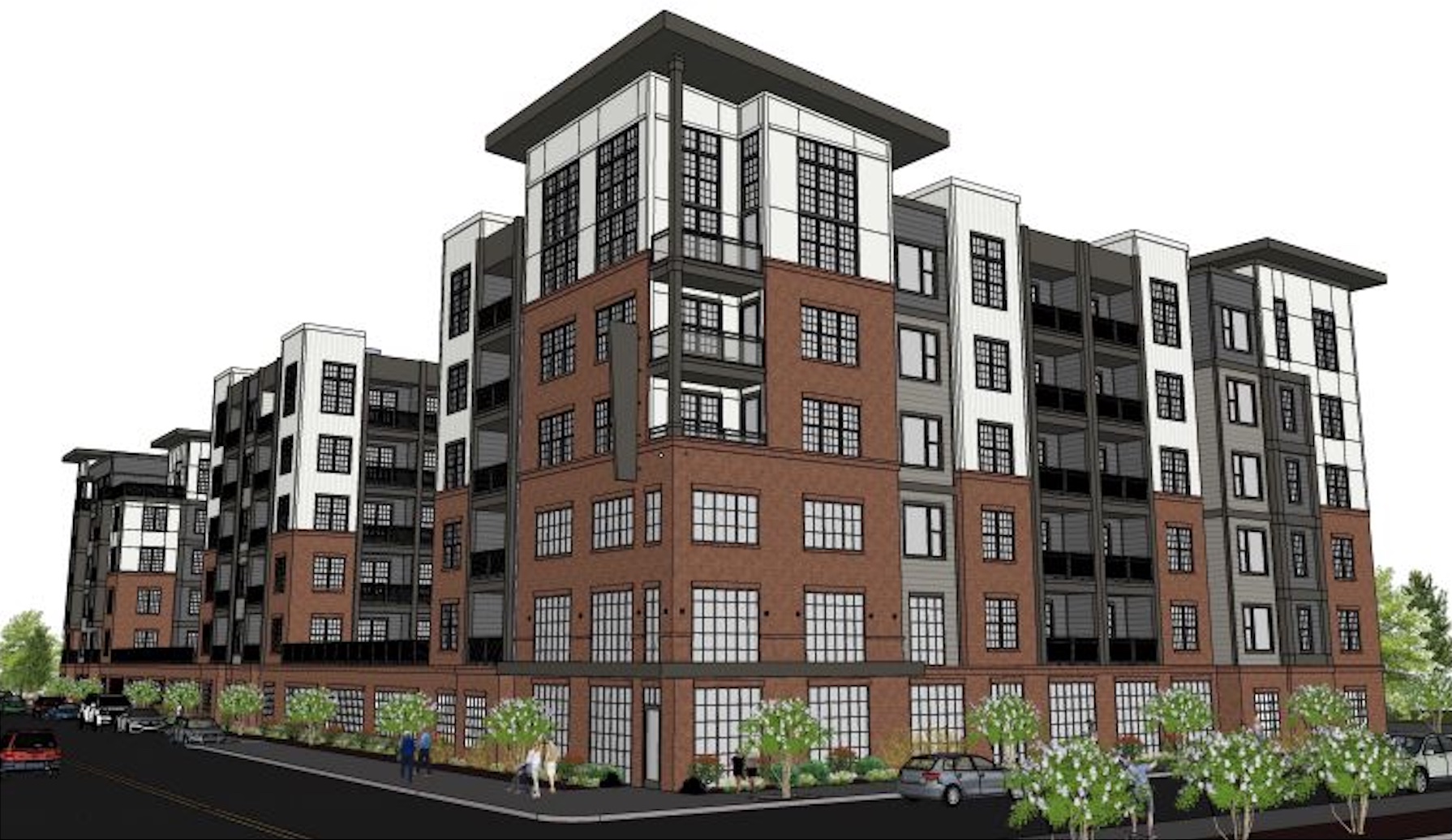 Manchester’s multifamily boom is continuing through the fall as three local developers are teaming up to bring nearly 200 more units to the city’s Southside.

The site is across the street from the former Caravati’s building at 104 E. 2nd St., which Catalyst and Blackwood are renovating into 42 apartments. Hourigan is leading the sizable redevelopment of the Southern States silos a few blocks closer to the river.

Catalyst Principal Justin Paley said he and Blackwood Principal Nolen Blackwood have known Hourigan’s Joe Marchetti III for a while, and saw this as a good chance to team up with a neighbor.

“I think there’s an interest of all parties to do more types of these projects,” Paley said. “We’re excited about that area. We feel like it’s got a lot of opportunity. It’s evident as you drive through it these days.”

Paley noted that Ali Semir of James River Housing Partners and Ralph Reahard of Real Property Management, who are partners in the Caravati’s rehab project, are not involved in this latest project. The group bought the Caravati’s site this summer for $2 million.

The Caravati family also currently owns the land that the new building will rise on, but Paley said he and his group are under contract to purchase it. The roughly 1-acre parcel was most recently assessed by the city at $593,000 and has the necessary zoning for the forthcoming project.

“The sellers were looking to sell it all (at once) originally,” Paley said of the Caravati’s assemblage. “We came in with a structure that was slightly different, where our approach was to break it into two transactions and do the historic development which we can move on a little bit faster.” 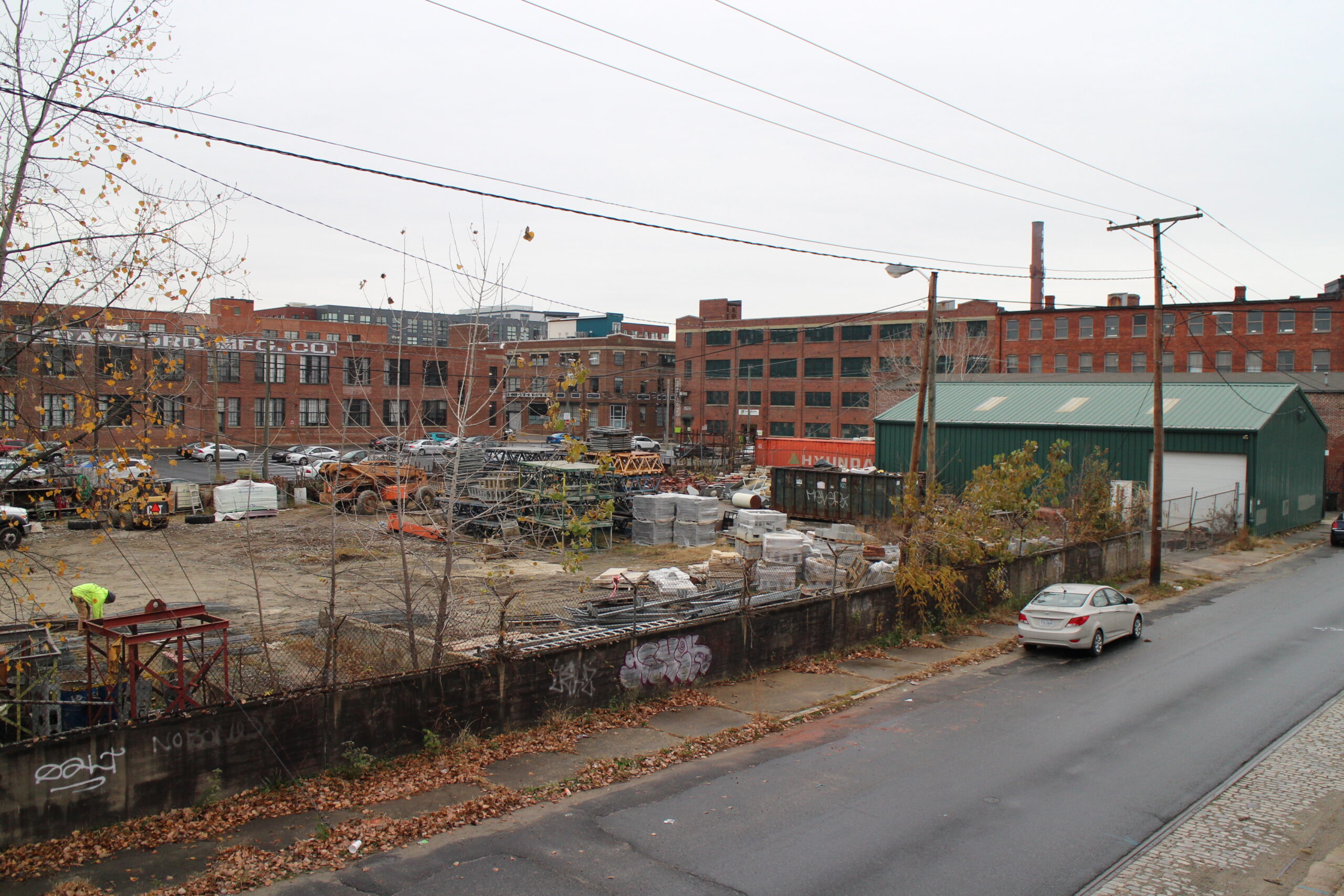 The plot, which occupies about half of a city block, is used for industrial storage. (Mike Platania photo)

A handful of warehouses totaling 13,800 square feet currently stand on the land at 103 E. Second St., with the majority of it being used as outdoor storage space.

“This’ll be a new construction project,” Paley said. “Unfortunately, those buildings are hard to incorporate and too small to really redevelop.”

At 133,000 square feet, the new building will reach five stories high and include 188 apartments and 110 parking spaces in a podium-style deck. Paley said they may also include a ground-floor commercial space but haven’t decided yet.

Work is already underway on the conversion of the former Caravati’s building across the street, and Paley said they’re planning to break ground on the new building in late 2022. Construction is expected to take up to two years. The group would not disclose a project cost.

The project’s general contractor is Hourigan Construction. Poole & Poole Architects is the designer, and Bohler is the civil engineer.

The group’s effort is the latest in a years-long multifamily hot streak in Manchester.

Most recently, Capital City Real Estate, a D.C. developer, paid $1.73 million for an acre of land at 15 W. 7th St. where it’s planning a 173-unit project it’s calling the Manchester Commodore. Another firm from out of town, Charleston’s The Beach Co., also recently broke ground on a 230-unit project of its own at 700 Semmes Ave.

Local developers also have hundreds of apartments in the works in the neighborhood.

The Current, Lynx Ventures’ mixed-use project at 400 Hull St., recently began welcoming residents into its 215 apartments. Across the street at 423 Hull St., Thalhimer Realty Partners is planning to build an eight-story, 271-unit project on a 2-acre site that’s currently a surface lot. Part of the Plant Zero complex along Hull Street is also being planned for redevelopment into over 200 apartments and townhomes by local developers Fountainhead Real Estate Development and WVS Cos.

Every week brings a new announcement of growth and redevelopment in a different sector of the City. Manchester has been one district that continually sees change coming it’s way as parking lots and storage buildings get swept aside for new apartments and townhouses.its exciting to see the changes coming along so quickly.

Manchester is so well situated. With a growing population, there will be more pressure to improve the Mayo Bridge, which is not the most welcoming bridge to cross. Also, a national grocery store will make more sense in that area.

Bridge improvement; that is in Infrastructure Act. What I would like to see is a sidewalks/capital improvement plan for both Manchester and Scott’s Addition. Walk down E 6th Street from Hull to Decatur. Developers are fill in the sections as they go but the city still has so, so many gaps. But no set plan.

Every week Richmond receives another example that our city has better quality development opportunities than a casino. 🙂

No trees were cut down or large amounts of farm feilds were paved over to build this. In fact the lot is a mix of run down one story buildings and gravel and overgrown paved parking lots.

The project looks beautiful. I love the banks of windows, the mixed materials and the overall design approach. Good luck to all involved. I can’t wait to see this completed.