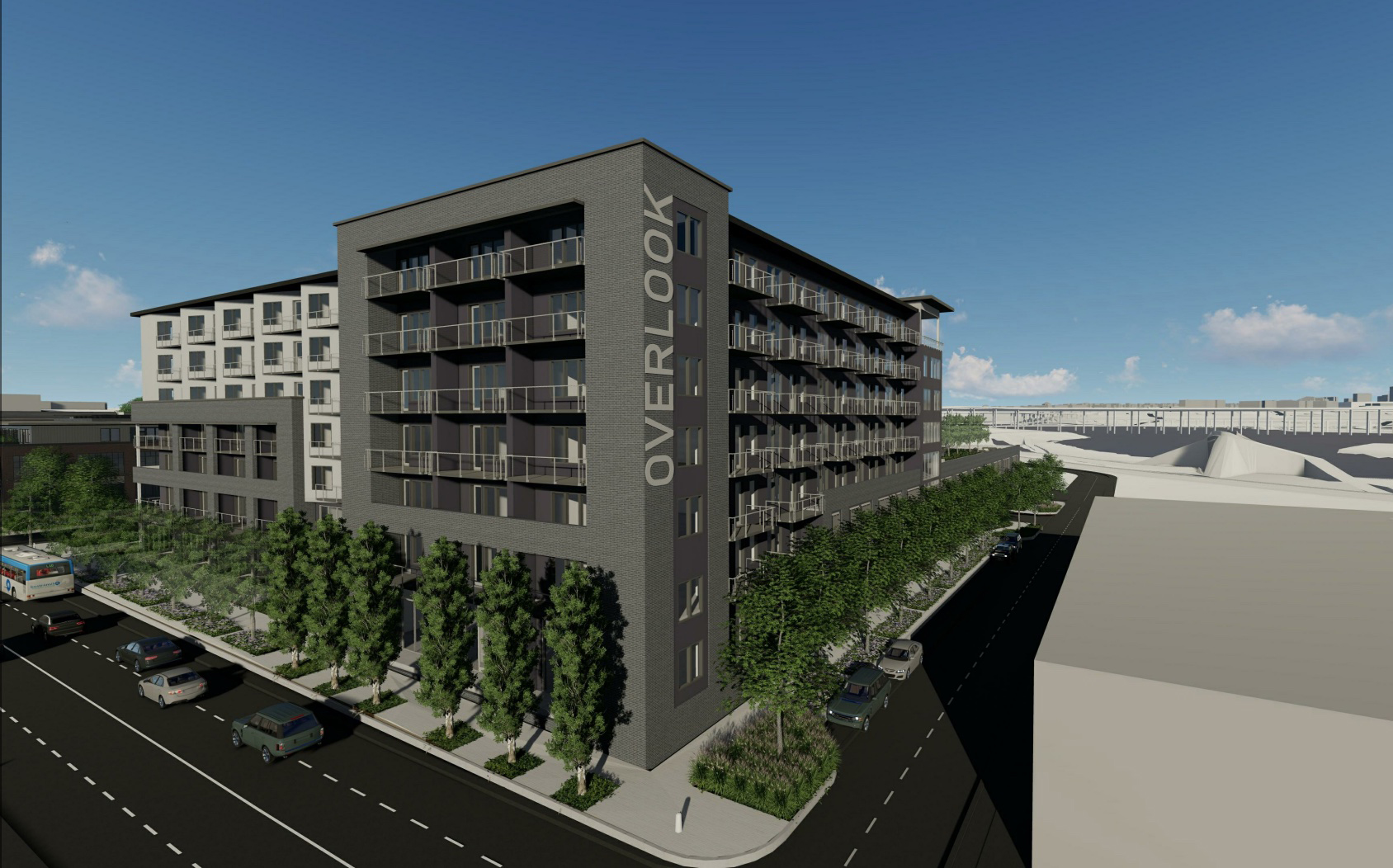 Not to be outdone by a seven-story building planned across the street, Thalhimer is looking to overhaul an entire city block in Manchester.

The preliminary plans, filed in late August, call for an S-shaped building containing 271 apartments above 10,000 square feet of ground floor commercial space. Thalhimer has owned the lot since 2013 as part of its acquisition of the former Reynolds South plant.

The new apartment complex would be dubbed Overlook II and would be just north of the company’s Overlook at City View apartments, which were completed in recent years at 500 Bainbridge St. 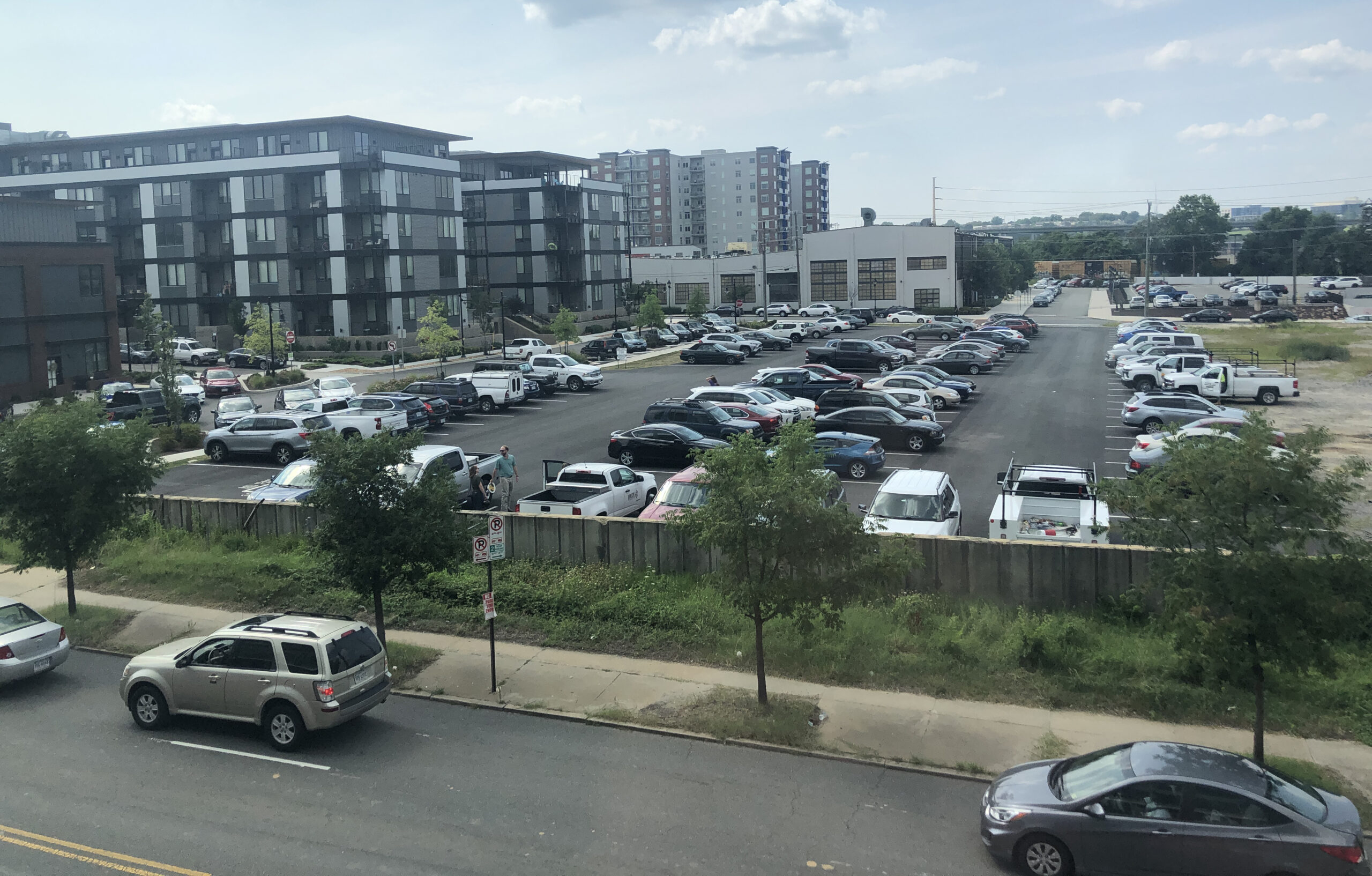 The parcel is currently a surface parking lot that’s in the shadow of The Overlook at City View apartments, which Thalhimer Realty Partners also recently developed. (Mike Platania photo)

TRP kicked off the planning process for Overlook II in the spring when it successfully rezoned the land to TOD-1 Transit-Oriented Nodal District.

Plans show that of the 271 apartments, 216 would be one-bedroom units, 42 would be two-bedroom units and 13 would be three-bedroom loft units. Amenities listed for Overlook II include a pool, courtyard, fitness room and lounge on the top floor. A three-story parking structure with 364 spaces is also included in the development.

TRP principal Drew Wiltshire declined to comment on the plans for Overlook II.

3North, which recently moved into new headquarters, is listed as the project’s architect.  Gradient Environment, Pace Collaborative and Ehlert Bryan are its engineers. Lory Markham of Markham Planning is the project’s planning consultant. 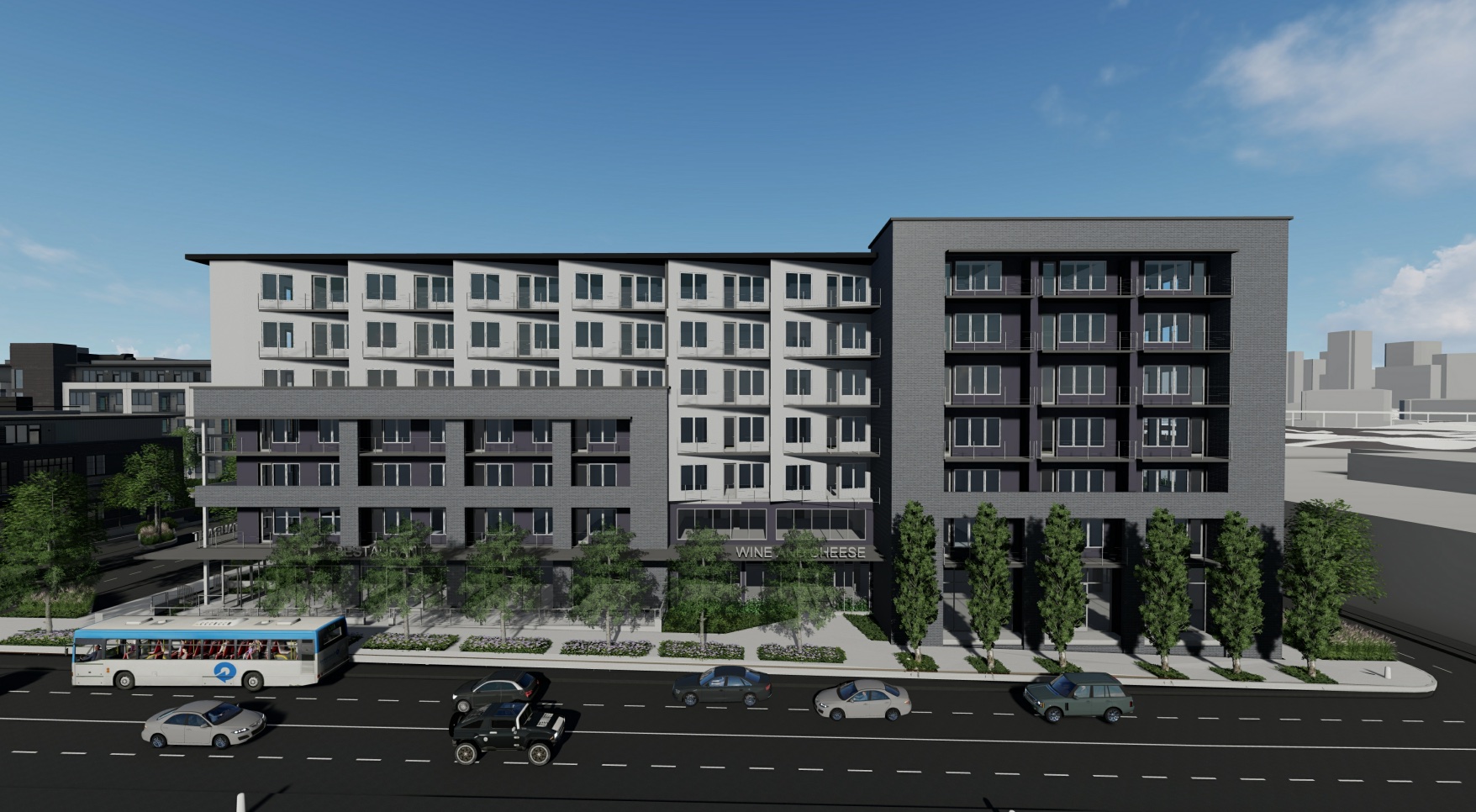 The project would include 10,000 square feet of commercial space fronting the 400 block of Hull Street. (City documents)

The plans note that the tenant or tenants for the 10,000 square feet of commercial space facing Hull Street will be determined at a later date.

Thalhimer has had success attracting retail tenants at its previous phases of City View in the 500 and 600 blocks of Hull Street, including Continental Westhampton and Stella’s Grocery. A Virginia ABC store is also preparing to open in City View Marketplace in the near future.

Thalhimer’s plans cap a busy end to the summer for Hull Street. Fountainhead Real Estate Development and WVS Cos. also submitted plans to redevelop part of the Plant Zero complex across the street into hundreds of apartments.

Also across from TRP’s land is The Current, a mixed-use development from Lynx Ventures that includes office, retail and residential uses.

Hull Street will soon be a canyon-way of new apartment buildings 4-7 stories tall from Mayo Island to Commerce Street. That’s not taking into consideration the the towers along the canal where it meets Hull. Then, sweeping upriver, the 350 unit Rivers Edge II and the developments along west 7th Street. Manchester is popping.

Sadly, This area is quickly running out of space large enough for a much needed full service grocery story. 10,000 sf. here isn’t going to cut it for a grocery store. Surely, with all these new developments, the density, income level and demand has to be at a point where these developers should be able to attract a major grocery chain!

There are plenty of parking lots and under used warehouse spaces still on the fringes of Manchester. It’s just a matter of how space is developed. Other urban areas find space within tall buildings and it’ll be found in Manchester.

I hope so… A large retail grocery store will be less likely not settle for a fringe location, but yes a properly developed site, like the one in discussion here would be the spot on Hull for a grocery. Commerce too is filling up quickly…Perhaps the only remaining lot of size is the underutilized Mc’D’s site.

I love all the balconies, and the way 3North has broken up the facade. Looks like a quality project.

I wonder if the parking is enough to compensate for the current lot users and the new development. TOD doesn’t magically make cars go away, unfortunately.

There is only a tiny surface lot on the property that holds maybe a dozen cars, mostly for construction workers at the Current. The rest of the block is unutilized.

With all of the currently announced and other significant developments in the works, this does look like the time to push for the next Pulse route along Commerce/Hull.

So all the developers make big money putting buildings up, then WE all pay for more PULSE busses to make it work.

you do realize the taxes all these buildings will pay provide way more than what they will utilize?

You are basically complaining that capitalism will give you money.

Building in a place like Manchester, in the middle of the city, is the smartest place humans can build, vis a vis infrastructure.

Charles; Maybe you can sell some people hay rides at the State Fair with your badly constructed straw man argument. I am clearly not attacking actual capitalism, where what you risk is related to what your profit is. What I am attacking, specifically, is developers who are working n a system where they lobby and make campaign contributions to write the regulations that they want, then use the rules they wrote for themselves to build with no thought, planning or allowances for how their building will fit into the city, then expect the rest of us to subsidize the developments… Read more »

You seem to misunderstand what a straw man argument is.

In what way is saying that a) your math is bad and b “Building in a place like Manchester, in the middle of the city, is the smartest place humans can build, vis a vis infrastructure.” is a straw man argument?

Both are simple facts.

I am a bit confused here on your complaint. These developments are occurring in an area that has been identified as a future Pulse corridor (actually two future lines). The zoning is laid out to encourage transit-oriented developments so eventually that transit needs to be implemented to support it.

I feel you, I really do. What I think you are not considering though is that Richmond is not a Class A location. Are we a second tier or third tier location? Not sure. I DO know that many of the arguments for Richmond is proximity to other places — if that cut it, Albany, NY would be booming. Generally, unless you are trying to create an ATTRACTION that will draw people to a general area, the time it pays to build expensively is when these expenses will be a lower % of the value of the finished project, so… Read more »