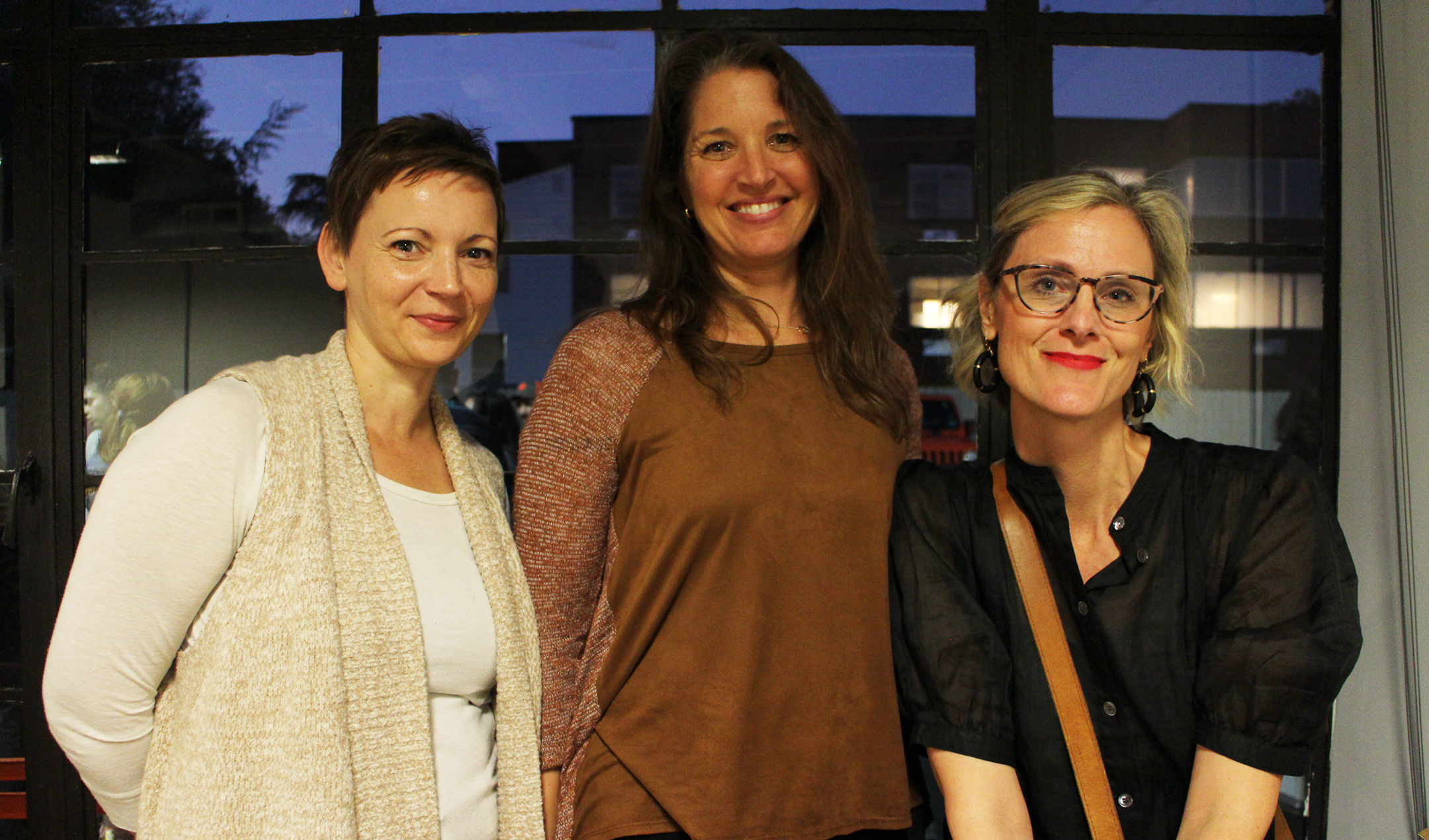 Two companies in different fields and from opposite sides of the city are set to become roommates after buying a Northside office building together.

Red Orange, co-owned by Susie Fife and Theresa Ceniccola, and 510, led by married couple Heather Grutzius and John White, were both in the market for new digs when they were brought together by Rene Haines, their mutual business coach with FocalPath Coaching.

Both companies were leasing their previous spaces – Red Orange at 2006 E. Franklin St., and 510 in Scott’s Addition’s HandCraft building. 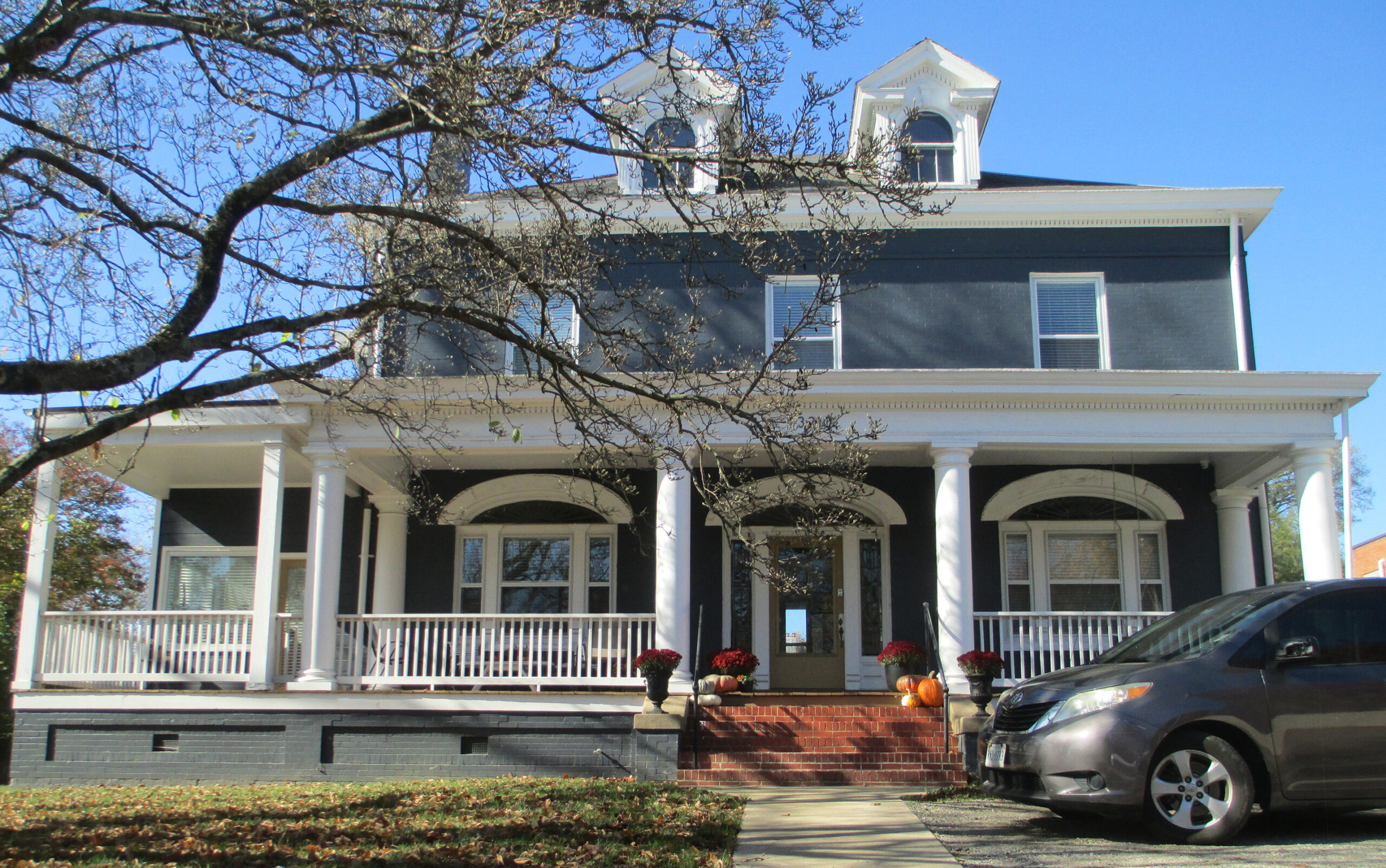 The former residence was built in 1920 and converted into an office building with a rear addition.

“They were looking for something similar, so we were able to connect,” said Fife, who launched Red Orange in 2005 and joined forces with Ceniccola four years ago.

“We were able to land on this space that was not on the market, just through John White’s connections, and they were up for selling,” Fife said of the building’s previous owner, an LLC owned by Richmond-based developer Ross Fickenscher.

Fickenscher, whose companies include Aoss Ventures and Riverfront Real Estate Group, renovated the three-story, 11,000-square-foot building after purchasing it for $200,000 in 2015, according to city records.

Fife and Ceniccola went in with Grutzius and White to form their own LLC to purchase the half-acre property, which the city had assessed at $680,000. The group paid $1.1 million for the property in a deal that closed April 1.

Cheryle Toy with Divaris Real Estate brokered the deal for the group with One South Commercial’s Ryan Rilee, who represented Fickenscher. 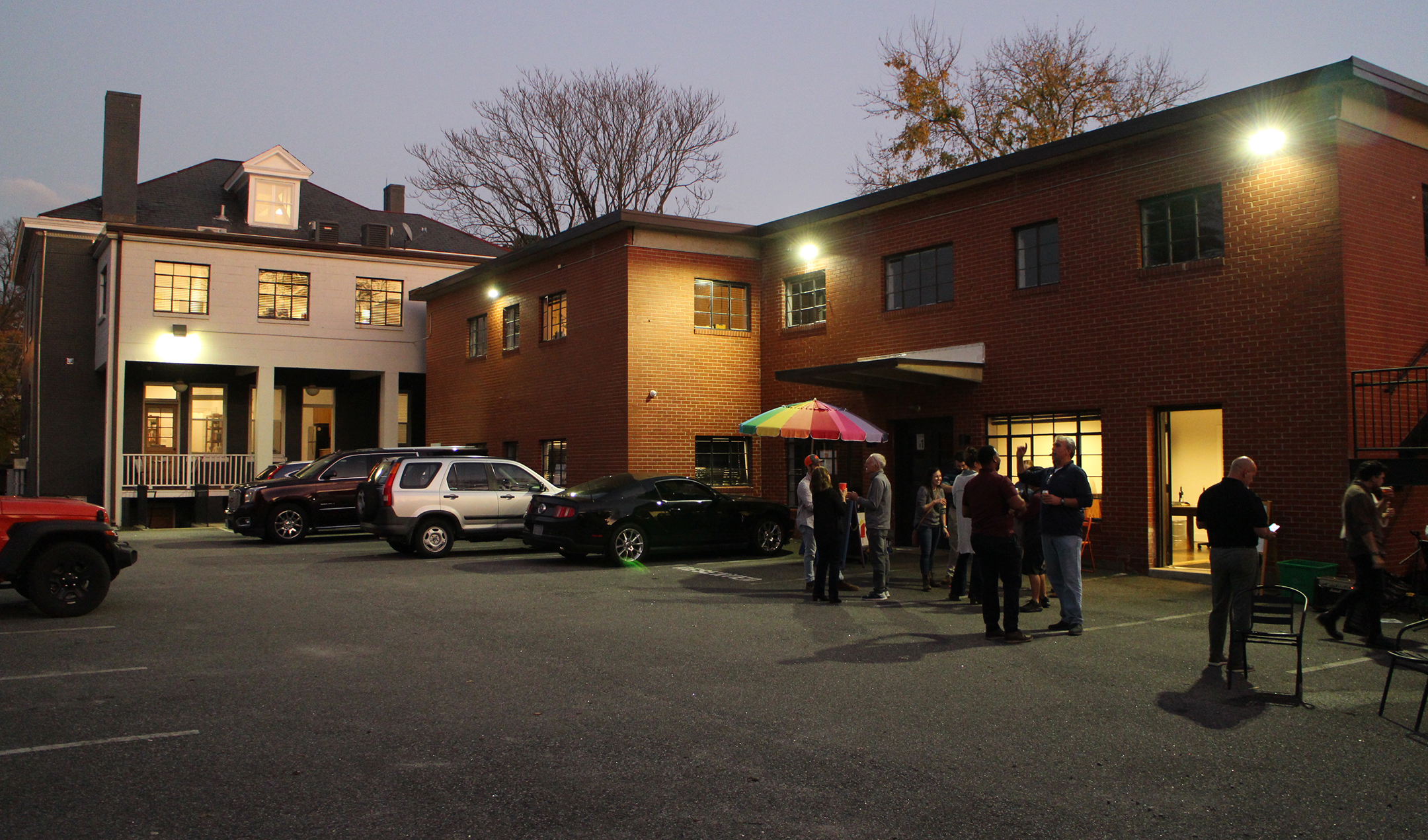 An open house was recently held at the complex, which totals 11,000 square feet and includes nine parking spaces.

Red Orange has since set up shop in the house, which was built in 1920 and later expanded and converted into a multi-tenant office building. 510 plans to move in sometime next year, after designing its own space in the rear addition.

Grutzius said 510 and its dozen employees will take about 3,000 square feet in the addition, which is made up of various offices that are leased to about a dozen tenants ranging from remote workers for out-of-town companies to local nonprofits and startups.

Grutzius said they plan to knock down some walls to create a larger space for 510, while a middle area between that space and the main house would be turned into a coworking space with a lounge area, kitchen, and conference and huddle rooms.

She said the variety of workspaces was a draw for 510, which leases desks in its current space to designers and other solo practitioners. She added that 510 and Red Orange share a vision for the building to be a hub for creatives across a broad spectrum of disciplines. Fife said Red Orange will be doing a brand launch for the coworking space soon. 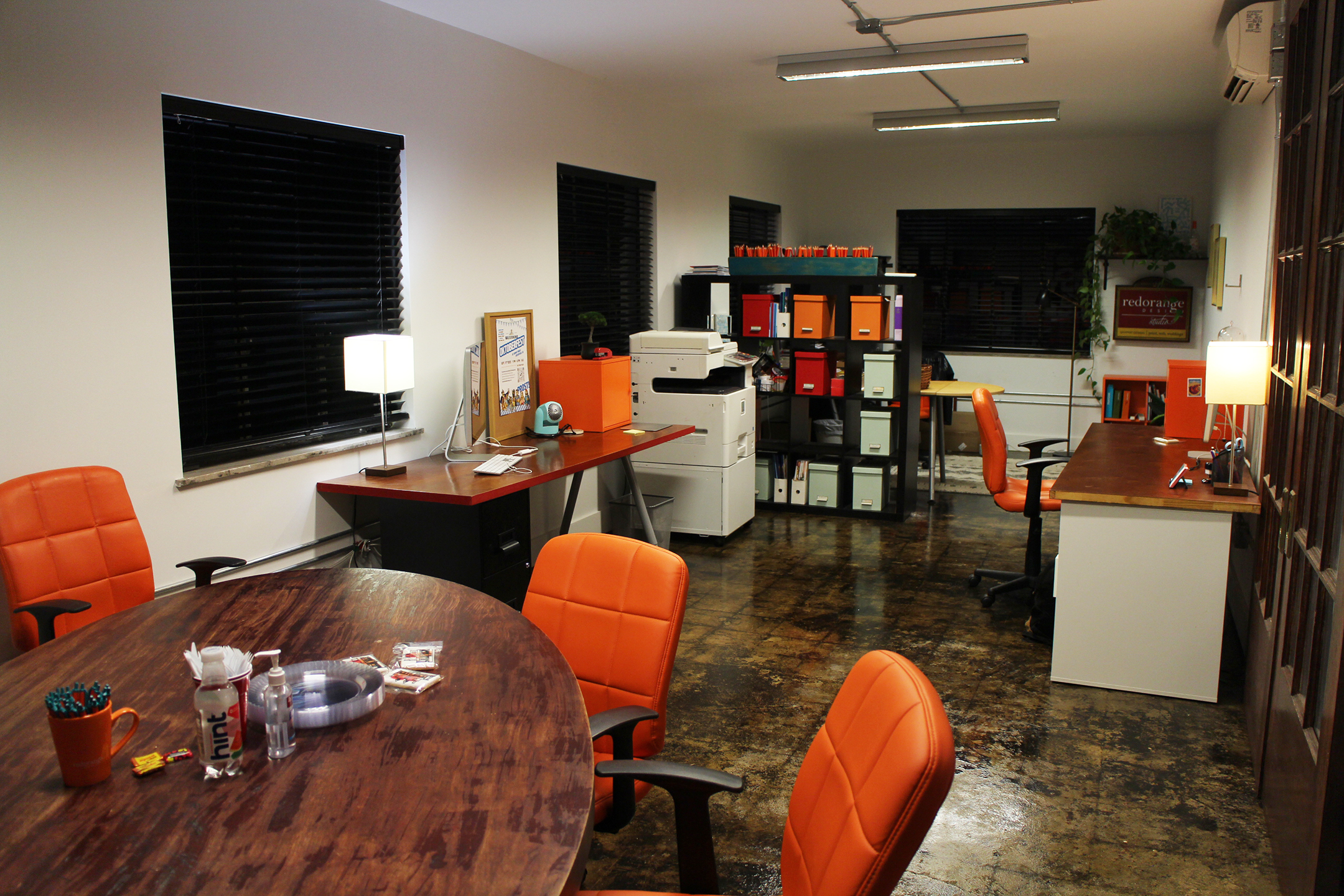 Noting the building’s mix of old and new architecture, Grutzius said, “It had that good juxtaposition. Susie’s folks are used to working in offices, so the house and the compartmentalized rooms work really great for her. And then we can just blow all these walls out and make this wide open and have the exposed concrete that’s really our style.”

Added Fife: “What’s really cool about this building is it’s actually hybrid in its architecture and design. The front building is an old house built in the early 1900s, and the back building was built in the ’50s or ’60s.

The property also includes nine off-street parking spaces, which Fife said was a draw along with the different workspaces that she described as more conducive to hybrid work for the agency’s 13 employees, four of whom are based in Hampton Roads.

Fife said the decision to move when her previous lease expired was driven in large part by the pandemic. 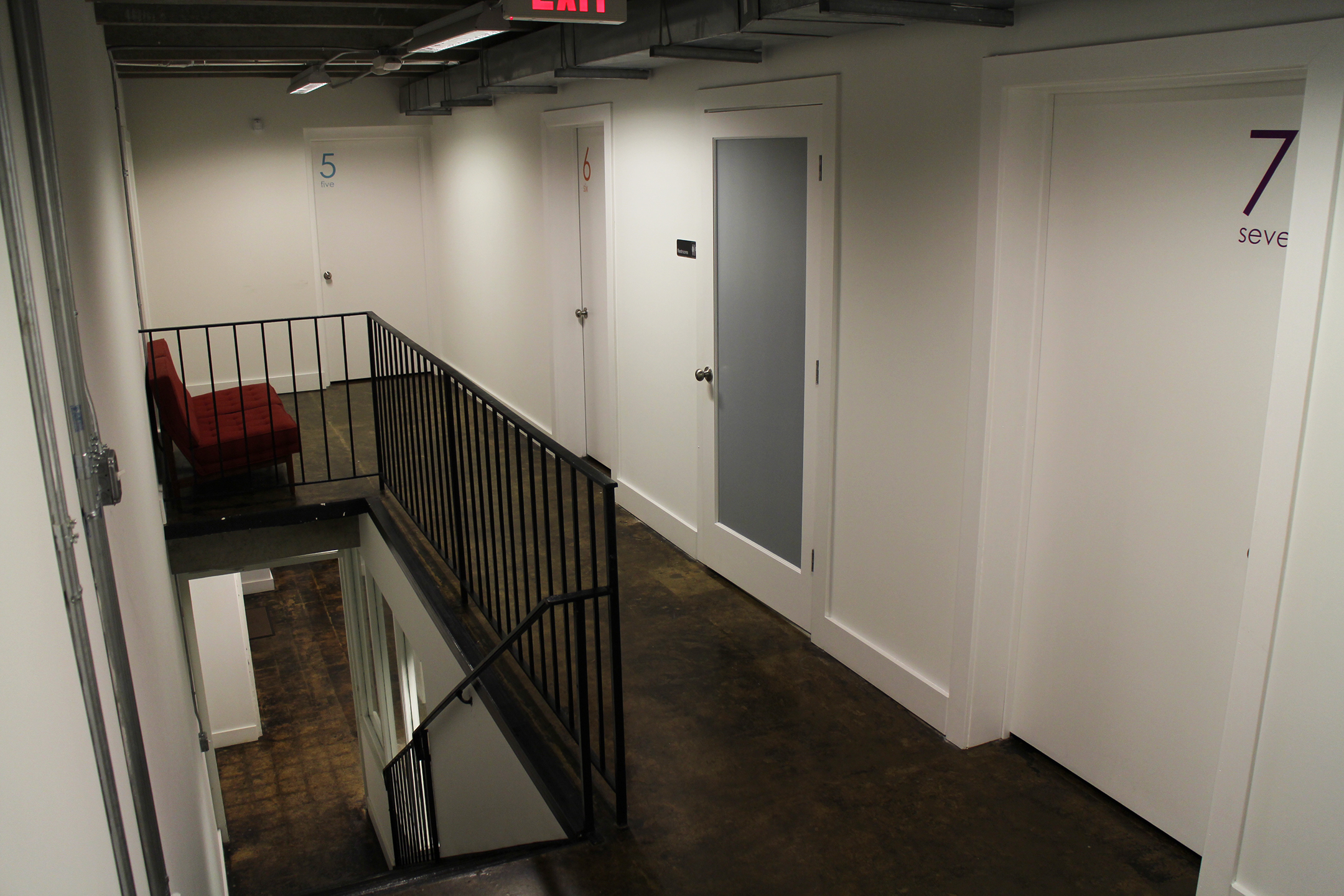 The industrial-style addition houses multiple offices for about a dozen commercial tenants.

“We were in the middle of COVID and really recognized the need for more hybrid work,” Fife said. “Our (previous) environment was very open, which we liked, but it wasn’t as conducive for a lot of video calls, etc., and we really didn’t have that space we needed for our growing Hampton Roads employees, a place for them to come and pop up shop.”

The agency had leased its Shockoe Bottom space since 2016. The 2,200-square-foot space, on the ground floor of the Cheroot Apartments building, is managed by Secam Properties and remains available for lease.

For Grutzius and White, the move to Chamberlayne will bring them closer to home. The couple lives a few blocks away, where they’ve spent parts of the pandemic restoring vintage Airstreams, though Grutzius said the proximity wasn’t the main driver.

The building purchase adds to other investment going on along that stretch of Chamberlayne Avenue. Next door, local developer David Gammino is rehabbing Madison House, a senior living facility at 3212 Chamberlayne that he purchased in June for $1.75 million using proceeds from a Broad Street apartment building he sold in February.

The developer did a beautiful job on that building. I sold it around 2008 and it was a dump!

Welcome to Northside, and specifically to Ginter Park!

Wow, that’s awesome. Congrats to all! Looking forward to bringing the AMA Richmond community by to check it out.

That is great! Happy for both Parties