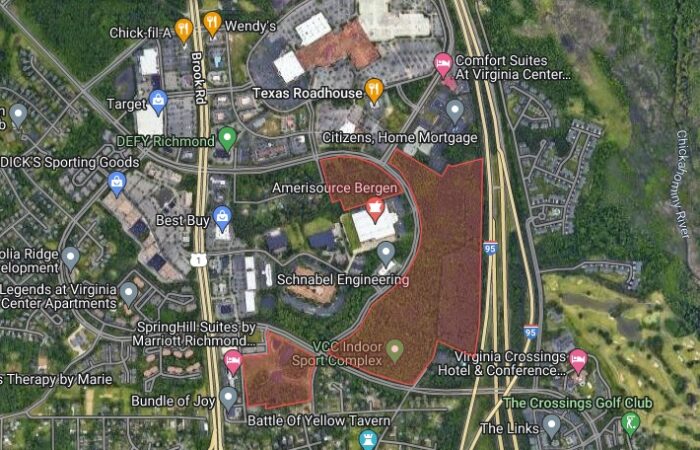 Shaded areas show the 93 acres where Sauer Properties is planning a mix of development. (Google Maps)

The revitalization of Virginia Center Commons and other development activity in the vicinity is prompting a neighboring property owner to pull the trigger on a massive project that would add hundreds of homes near the former shopping mall.

Sauer Properties, which owns several wooded tracts south of VCC, is planning to develop that land with a mix of uses that includes industrial, office, retail and 780 residential units, including apartments and for-sale townhomes and condos.

The Richmond-based company is applying to rezone the properties, which total 93 acres and involve four parcels along Jeb Stuart Parkway on the west side of Interstate 95. The bulk of the land is between the parkway and the interstate, while one parcel is across the street and another is catty-corner across its intersection with Virginia Center Parkway. 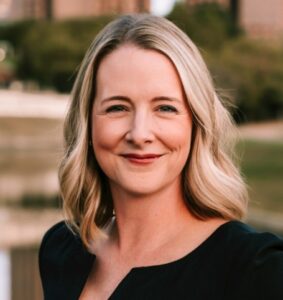 Sauer Properties President Ashley Peace said the time and conditions are right to develop the properties, which had once been planned for office use but were never developed. She cited VCC’s redevelopment as a motivator, as well as the nearby River Mill development from HHHunt, which is signed on to build the for-sale homes for Sauer.

“They’ve had tremendous success over there, so we’re excited to bring new housing and revitalize the whole Virginia Center Commons area,” Peace said Wednesday. “I think our development is extremely complementary to what Henrico County and Rebkee have already started with the redevelopment of the mall. We’re just happy to be a part of it.”

The rezoning request, which goes before the Henrico Planning Commission later this month, would change the Sauer land’s designated use from primarily office to a mix of industrial and multiuse development, the latter under the county’s Community Mixed-Use zoning district. 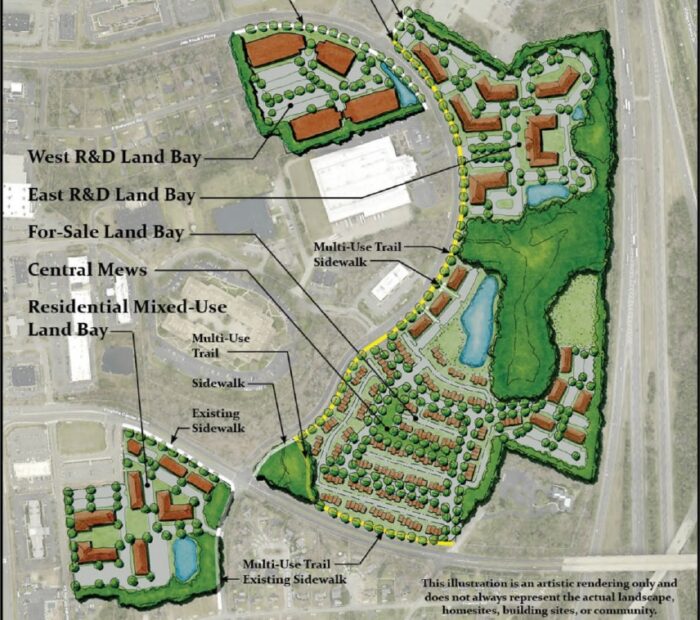 A site plan shows the four development bays with industrial buildings at the top and residential and mixed-use buildings toward the bottom. (Henrico County documents)

The bulk of the land had been zoned in the 1980s for office development as part of a larger project involving land on both sides of the interstate, according to a county staff report of the Sauer Properties case. That larger rezoning resulted in The Crossings development on the other side of 95, around the time VCC was built in 1991.

Following years of decline, VCC is undergoing a mixed-use conversion that’s planned to transform it with residential development, potentially two hotels and retail and entertainment uses, including an indoor sports and convocation center for Henrico. The county is coordinating the project with local developers Rebkee Co. and Shamin Hotels.

Peace said Sauer’s project would essentially extend that development trend southward. While lumped together as one rezoning, Sauer’s parcels are planned to be developed as four distinct sites or “development bays,” as described in a county staff report. 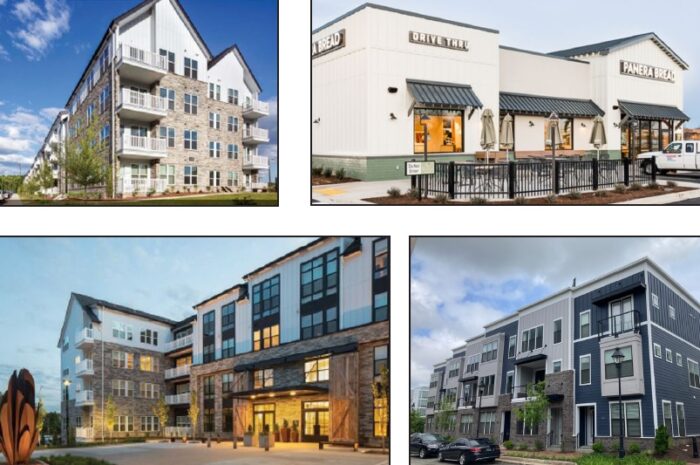 Thirty-three acres at the northern end of the project would be designated for industrial and retail development, with Sauer working with the Henrico Economic Development Authority to recruit research-and-development or “similar low-impact” users. Buildings in that bay, which would adjoin the existing Virginia Center Technology Park, are expected to total about 258,000 square feet of space and could reach 110 feet in height.

The rest of the land would house residential and mixed-use developments, with the for-sale homes – 450 townhomes and condos – grouped south of the R&D bay and separated by a wooded area. The mixed-use component with 330 apartments and retail would be grouped catty-corner across Virginia Center Parkway, on land adjacent to the Stuart’s Crossing Shopping Center that Sauer developed in 2016.

Sauer had once planned a grocery store at that site. Peace said a grocery is not part of the mixed-use plan.

Sidewalks, trails and a future bus stop are planned with the development, along with open space and greenspace and a central mews area within the for-sale homes bay. Townhomes would be limited to eight units per building, and a 3,000-square-foot clubhouse would be included in the mixed-use bay. Buffers between neighboring developments and the interstate are also planned. 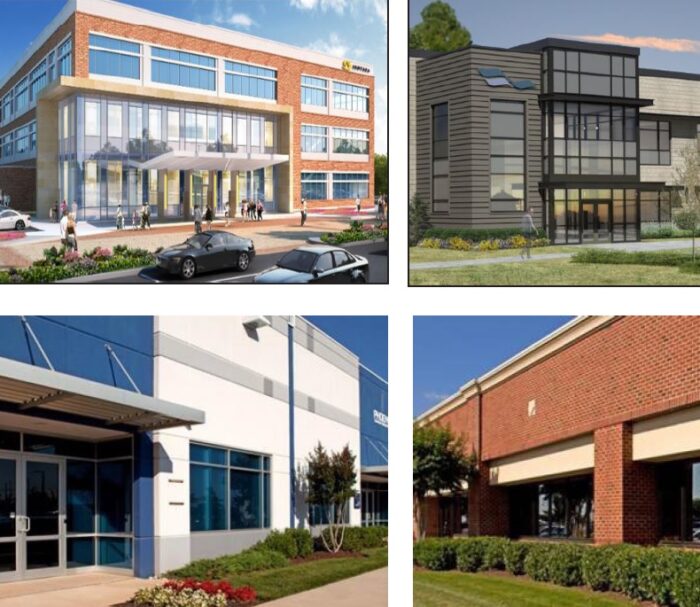 The industrial and office buildings could reach up to 110 feet in height.

County planners are requesting that the R&D bay be phased so development keeps pace with the residential sections. The report also states that the county could fully support the project with additional residential amenities, more coordinated lighting, and road improvements in accordance with a traffic impact analysis that remained under review.

Local law firm Hirschler is representing Sauer in its rezoning request, which is on the agenda for the Planning Commission’s Jan. 12 meeting. A final decision would come from the Board of Supervisors, which would likewise hold a public hearing before a vote.

Sauer, whose holdings across the region include its Whole Foods-anchored Sauer Center complex in Richmond and an industrial park in the works in eastern Henrico, has owned the VCC-area parcels for decades, county property records show. It acquired three of the four parcels in 2002 in a $4.5 million multi-parcel deal with STI Properties. The fourth parcel, at 9710 Battlefield Road, was purchased in 2011 for $1.4 million.

The county has assessed the four parcels at $16.5 million collectively. The project involves only part of the Stuart’s Crossing parcel at 1091 Virginia Center Parkway.

Should the rezoning go through without significant delay, Peace said Sauer would secure permitting for the project by the end of this year and start development sometime in 2024.

“It’s a very doable project, and it’s perfect timing, honestly, as we go through this recessionary period,” she said. “It will take 18 to 24 months to get design and permitting and all that stuff in place, so we should be positioned very well coming out of that.”

Peace said Sauer would develop the apartments and other uses, while HHHunt would build the for-sale homes. She said price points and rents would be market-rate for all of the residential units, which she said would help meet a market demand for new-construction homes.

“Right now, housing supply is zero, so it’s perfect timing,” Peace said of the project. “Interest rates hopefully will be falling, and we’ll be able to bring a lot of opportunity to a submarket that is really popular.”

Its an excellent plan buffering the interstate with the apartments and condos. I’d like to see some property targeted to an age restricted community but that’s not always possible. Nonetheless I’m glad to see Sauer moving forward on it. Sauer owns a lot of land locally, and Ashley appears to be the tonic In that firm to get things moving in the right direction. She’s got a big job!

Absolutely love this development. A really smart mix of business/commercial, retail and residential components. A solid looking plan all the way around. Excellent location for this project as well – and I particularly like how it’s a “long catty-corner” across the interchange for I-95/I-295 from the planned Green City development. By extension, these two projects together will bring tremendous synergy to this part of the northern suburbs and should enhance this specific area as a legitimate up-and-coming “edge city” along RVA’s (semi) beltway. It’s an absolutely great fit for this district. Sauer’s development brings with it some impressive residential density… Read more »

I really hope Henico County has plans of putting sidewalk and pedestrain crossing construciton to warp speed in this area.

Also the developer needs to add eletric car chargers to every apartment to save on future costs of adding plugs to all the apartments.

Current electric car technology is damaging to the environment and not very reliable at all. Don’t people realize how much it costs to replace batteries in those things and what it does to the environment when you do “recycle” them. Vehicle is essentially junk after 5 to 7 years and has hardly no value except a rolling chassis. You know what’s more environmentally friendly? Buy a used car or bring a classic car out of the barn to be saved. No thanks, I’ll stay with my gasoline vehicles. I’d rather have a Mustang with the Coyote 5.0 over a Tesla… Read more »

I own a cheap used sub $20,000 electric car and it can go 240 miles on a charge and I have had a easy time driving it over 200 miles in one day. I bought it a few days before Russia invaded the Ukraine and oil prices skyrocketed and I was partying as gasoline went over 5 dollars a gallon. I also have only driven a gas car 4 times since buying it. When I take it to Bush Gardens I regularity save 8 to 9 gallons of gas in a sitting. It has no trouble passing all the gas… Read more »

Good luck when someone hacks your autonomous driving system.

Has any consideration been given to making some of the apartments or even the for-sale homes affordable for folks making 30% AMI?

Hopefully not, since requiring “affordable” set-asides is just a well-known tactic of the Build Nothing Anywhere Ever people that results in overall housing costs increasing due to projects never being built at all.