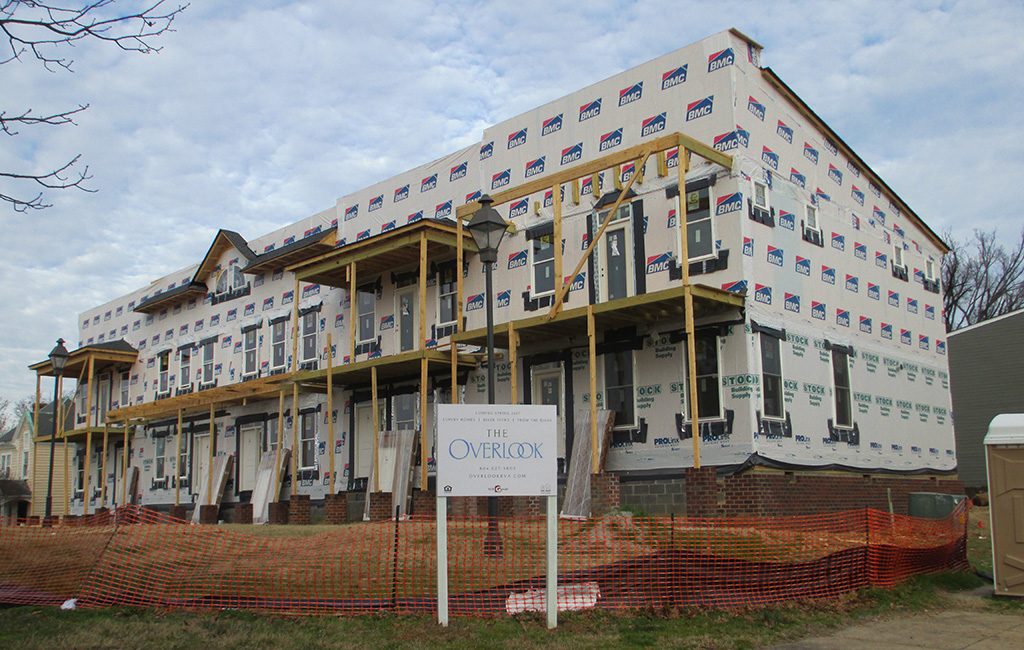 Five townhomes are being added beside the Overlook Condominiums in Oregon Hill. (Jonathan Spiers)

Drivers along the Lee Bridge may notice something new being built atop the bluff of Oregon Hill.

A section of five townhomes is being added beside the Overlook Condominiums at the riverside edge of the historic Richmond neighborhood, filling a section that was left vacant when the condos were built about 10 years ago.

Developer Steven Middleton of Commonwealth Properties, who developed the original units, is behind the new townhomes, picking up where he left off around the time of the economic downturn and decline in the housing market.

Middleton, whose other projects in the area include the Avia apartments in Short Pump, is working with Bill Garrett of construction firm W.B. Garrett, which has built homes in Kinloch in Goochland and the Estates at Grey Oaks and Stonehurst in Glen Allen.

Attempts to reach Middleton and Garrett were unsuccessful. 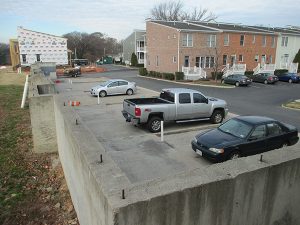 The framework for another set of homes across the street is being used for parking.

The new towhomes, called Overlook, are being marketed by Alexis Thompson of One South Realty Group. She said the units are the first of potentially more sections to come to fill out the development, on sites where foundations were left unfinished. One such foundation across South Laurel Street from the current construction is being used for parking.

“The market has been so strong that now was the time to resume this project and make it even better than it was before,” Thompson said. “There were the pads already ready to go.”

The five townhomes will range from 1,400 to 1,800 square feet and include three bedrooms, 2½ bathrooms and open floor plans. Prices will start in the high $300,000s and go up based on finishes, unit sizes and views of the river.

“It combines a nice element of natural and urban life, because of those river views,” Thompson said. “Sometimes when people buy in the city, they feel like they’re sacrificing their access to natural amenities, and in this case, they get the best of both worlds.”

Thompson said the market for new homes in the city is hot, with infill development wherever homes can be fitted, and demand from young professionals and VCU graduates. Recent infill projects have included Huntt’s Row and Citizen6 in the Fan, TriBeCa in Randolph, Maplewood at Grove and Libbie, and homes fitted in city alleys in Church Hill and south of the Fan.

Thompson said she’s received interest from neighbors in Oregon Hill who are renting and looking to buy, and from curious observers crossing the Lee Bridge.

“We get a lot of commuters that see those homes and think, ‘Oh, my commute would be a lot friendlier if I lived right there,’” she said.

The homes are scheduled to hit the market in February, Thompson said.

Middleton and Garrett are a great combination for a quality house. The location has always been superb for home ownership.