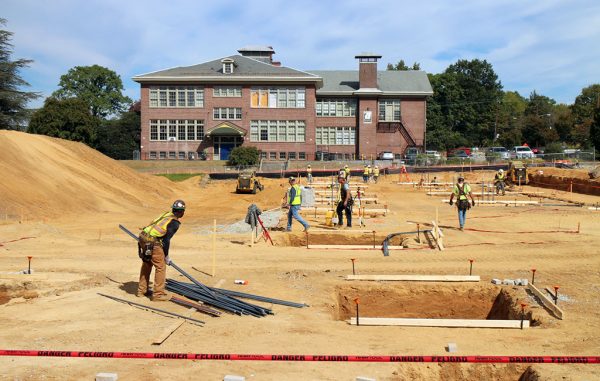 Construction began on the development beside the former Fulton School at 1000 Carlisle Ave. (Jonathan Spiers)

A nearly $40 million project aimed to catalyze a long-overlooked Richmond neighborhood is beginning to take shape, led by a local development group that bears the area’s name.

Fulton Hill Properties has broken ground on its 204-unit, mixed-income apartment and commercial development beside the former Fulton School at 1000 Carlisle Ave., where the company’s offices are housed.

Called Artisan Hill, renamed from Studio Row, the mixed-use development will consist of two six-story buildings totaling 204 one-, two- and three-bedroom apartments, 11 artist studios, a market-café, rooftop deck, structured parking and a 75-foot lap pool, along with a 3,000-square-foot gym and a bicycle repair shop.

The project also will renovate the former school building with additional studios and 33 more apartments, bringing the residential unit total to 237.

Site work started in early August, and completion is targeted for summer 2019. The project is budgeted to cost between $38 million and $40 million.

The development is a benchmark for Fulton Hill’s Margaret Freund, whose historic rehabs in the city have included the Bottoms Up Pizza building, the former Flood Zone/Have a Nice Day Café building, the Haxall View and Lava Lofts apartments, and the Lady Byrd Hat building that now houses CarMax offices.

While Freund’s kept active with those and other projects in a development career that spans three decades, the Washington and Lee law school grad and former public defender has kept her focus on the Greater Fulton area, where she resides, since she started Fulton Hill and put its offices in the former school she purchased in 1997 for $195,000. 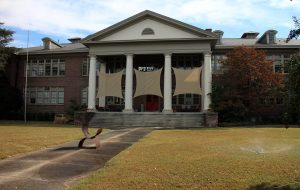 The front of the school building will host outdoor seating for a planned market-cafe. (Jonathan Spiers)

Having secured surrounding parcels that make up the 6.4-acre site, purchasing several of them from the city in a multi-parcel sale that city property records show included an $80,000 transaction that closed Aug. 1, Freund is expanding her vision of a mixed-use development that would continue the school building’s previous use as a haven for painters, sculptors and other artists.

“We’re proud that this has been an anchor for the arts and supported the arts for a long time,” Freund said.

She also sees the project as a catalyst for change in an area mostly razed in the 1970s but on the upswing with the arrival of Stone Brewing, Triple Crossing Brewery and the nearby Villas at Rocketts Landing, a solar-powered subdivision along Williamsburg Road.

“We wanted to build back the things that existed in this community, because over the years, Greater Fulton lost those things,” she said. “The neighborhood has been a little secret for a long time.”

The new buildings will have five stories of apartments above one story of partially underground parking. Earlier plans called for those buildings to line Carlisle Avenue, a cobblestone road that will be reopened to public use as part of the project, but site issues required the buildings to be realigned and grouped together across Carlisle from the existing building.

Freund said the apartments will be targeted to young professionals and workers such as teachers, firefighters and nurses. Of Artisan Hill’s 237 units, 30 percent will be reserved for low-income renters. Ten percent of those must for 10 years go to residents making 60 percent of the area’s median income. The other 20 percent must for 30 years be rented to those making 80 percent of the median income.

“We hope we’re going to get a diverse mix of people who live here. I think the mixed-income component is really a reflection of what our neighborhood already is,” she said, noting the nearby collections of older single-family homes. 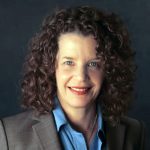 Freund said the planning process took longer than expected, pushing the project’s start back about a year.

The contractor on the project is KBS, and Tekton Builders is providing historic renovation work. Poole & Poole Architecture designed the new buildings, and ADO designed the renovations to the existing building.

A groundbreaking ceremony with Mayor Levar Stoney, Councilwoman Cynthia Newbille and others is scheduled this Friday, and Fulton Hill is holding a public event Oct. 27 to highlight the project and celebrate the school building’s centennial.

“We are extremely grateful to our community for the spirit of collaboration that even continues today,” Freund said, referring to neighborhood meetings and feedback that she said has helped shape Artisan Hill.

“I have gone out on a limb before. Now, I feel part of an organic neighborhood movement,” she said.

Correction: This story has been updated to correct the percentage of apartment units that will be rented to low income residents.

[…] Click here to read the entire story at Richmond BizSense. […]