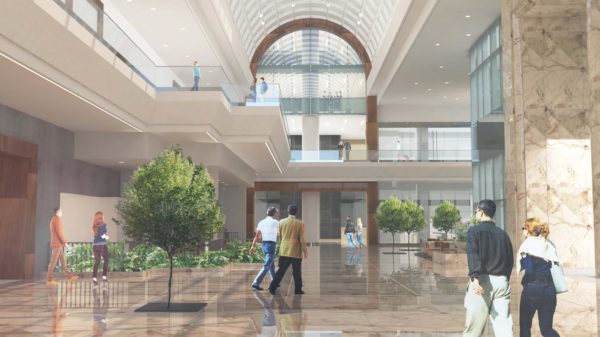 The Atrium at the James Center is shedding its 1980s interior for a new look. (Baskervill)

A prominent downtown office complex soon will be without the meats as its owners prepare to take renovations of the property into a new phase.

Arby’s is set to cease operations by the end of November at its long-time restaurant in the Atrium section of the Three James Center building at 1051 E. Cary St., said Bruce Boykin, who oversees the three-tower office complex as senior asset manager for owner Riverstone Properties.

Boykin said Nathan’s Custom Tailors also is set to vacate its 950-square-foot spot in the atrium by year-end.

The two pending departures will allow Riverstone to begin to modernize the Atrium, which serves as James Center’s main gathering area and links several sections, including the Omni Richmond Hotel and the complex’s buildings at 1021 and 1051 E. Cary St.

To kick off the project, Boykin said the group plans to fold the existing Nathan’s space into the Arby’s location to create about 4,240 square feet of dining space for a prospective restaurant tenant.

Other changes include scrapping several 1980s-era relics in the Atrium, including the indoor water feature, pink marble and unused in-ground tree grates. They will be replaced with new flooring, seating and above-ground plantings.

A three-story glass wall feature will replace the current marble sundial, allowing the upper levels of the Atrium a view of the improved space. An updated elevator bank and revitalized retail exteriors for the remaining tenants also are included in the plans, along with enhancements to improve natural lighting in the complex.

The cost of the Atrium improvements was not disclosed.

Construction could begin on the project by year-end, Boykin said, with completion slated during the fourth quarter of 2020.

Baskervill is the architect and Hourigan is the general contractor.

With the exception of Arby’s and Nathan’s, the Atrium’s other tenants will remain. That includes local juice bar The Pit and The Peel, which opened in the center in November 2018; computer repair shop Experimac, which opened in March; Starbucks; and Sesame Sushi. 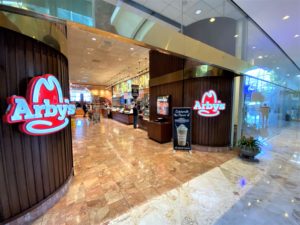 Arby’s is set to close its restaurant in Three James Center by the end of the month. (Riverstone Properties)

Richmond-based The Restaurant Co. operates the James Center Arby’s, which has been a fixture there for nearly three decades. It’s expected Arby’s will be gone by the end of December. It’s the lone remaining Arby’s within city limits.

The restaurant previously operated a location at 2309 W. Broad St. next door to Chicken Fiesta, but closed the location after selling the site to a group of investors that planned to turn the space into a Zaxby’s, which has yet to materialize.

Wawa, the Pennsylvania-based convenience store and fueling station chain, is eyeing an Arby’s just over the Henrico County line at 5900 W. Broad St. If county planners approve, the Arby’s could be closed and demolished.

Nathan’s has occupied space in the James Center since 2011, but has been a household name in Richmond since the 1930s. The retailer is known for custom-made suits, sport coats, pants, tuxedos, topcoats, custom shirts, and other men’s clothing and accessories. 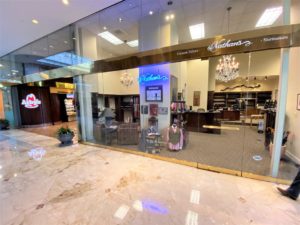 Nathan’s Custom Tailors is set to close its shop in Three James Center by the end of the year. (Riverstone Properties)

Boykin said Nathan’s owner Michael Zell will operate the business from his residence once the store vacates the James Center.

Riverstone purchased the James Center in 2017 for $108 million and has since begun a multimillion-dollar overhaul of the nearly 1 million-square-foot complex, with a goal of attracting new tenants.

That process began with renovations to One James Center at 901 E. Cary St. – and the effort has had the desired effect.

The former Wendy’s on the building’s ground floor is being converted into the region’s second location of restaurant chain Chopt Creative Salad Co.

South State Bank recently signed on for more space in the building, taking an additional 8,800 square feet on the tower’s second floor, and adding to the bank’s adjacent, newly renovated 10,000-square-foot office that it unveiled this year.

HCA Healthcare Capital Division, which oversees 18 hospitals throughout Virginia, Kentucky, Indiana and New Hampshire, announced in June it was relocating its management offices to the former Bull & Bear Club on the 21st floor of One James Center.

I’m sorry to see them go. That Arby’s had the nicest fast food workers I have ever encountered in my life. I hope the staff all land well.

The architect drawing doesn’t look any different than the existing atrium. I will miss the staff at Arby’s.

this is a terrible idea. Arby’s is great for downtown. Choices of fast food , or a plate of “real” food. The place is always full of people for lunch, and that should say something. AND , the employees there are the nicest people ever. Miss Sheila, and Miss Grace on the registers are a true blessing. I vote NO to letting Arby’s go. I will miss them greatly .

While they were always busy the space definitely needs updating and it may be best to wait and see what opens in the space next. I always liked it there, but Arby’s didn’t have much in the way of healthy options and they closed at 3pm daily. I imagine whatever comes next will be open from breakfast to dinner, and will have a more diverse menu.