A developer known for its “two-over-two”-style condos is continuing to add to its workload in Henrico, while a local firm’s project on the other side of the river would add hundreds of such units in the heart of Midlothian.

The denser of the two is Chesterfield-based Emerson Cos.’ Coalfield Station, planned to consist of 343 condos on 21 acres at 120 Walton Park Road. The undeveloped tract is between Woolridge Road and Midlothian Middle School, southwest of Woolridge’s intersection with Midlothian Turnpike.

Plans show a mix of three- and four-story buildings, with 226 of the condos as so-called “two-over-twos” – meaning pairs of two-level condo units stacked on top of each other within four-story buildings. The remaining 117 units would be grouped as triplex-style units. 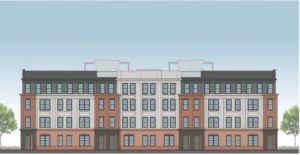 A rendering of one of the Coalfield Station two-over-two condo buildings.

A county staff report states the two-over-twos and triplex-style condos would be the first of their kind in the area, which is in the heart of the Midlothian Village district. That district is the subject of a special area plan, essentially a blueprint for growth, that the county adopted in December.

The report notes that Emerson’s rezoning application was submitted in February 2019, before the Midlothian Community Special Area Plan was adopted. It said the developer has since worked to make the project adhere to the plan’s recommendations, holding community meetings since July and reducing its proposed number of units from 387 initially.

The county Planning Commission recommended approval at its meeting last month, and the project goes before the Board of Supervisors for a deciding vote tonight. 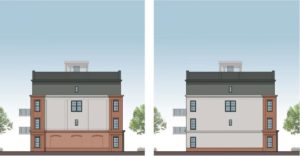 An end view of the Coalfield Station condo buildings.

Reached Tuesday, Emerson Cos.’ George Emerson said he did not want to comment on Coalfield Station before it went before the board.

Emerson is working with Glave & Holmes on the designs for Coalfield Station, and Townes Site Engineering drafted the plans. Hirschler attorney Jeff Geiger is representing Emerson in its application.

The wooded land is owned by the family of William Henry Jones Jr., who purchased it in 1967 for $3,300, according to county property records. The current owner is Jones Henry Family LC, which assumed ownership in 1997. The most recent county assessment valued the land at $1.3 million.

Several miles north in Henrico, Reston-based Stanley Martin Homes, which has included two-over-two condos in many of its developments since entering the Richmond market in 2014, is planning a mix of condos, townhomes and retail on the south side of West Broad Street at the Goochland County line. 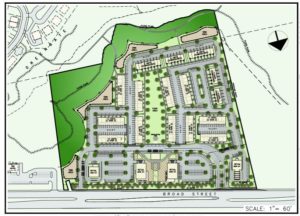 The 23-acre site sits across from Stanley Martin’s Saunders Station at Broad Hill Centre condos. It would include 6 acres of commercial development, including restaurants, while the rest of the site would be filled with 194 for-sale condos and townhomes, reduced from an initial plan of 204. Plans show the breakdown would be 162 condos and 32 townhomes.

Markel | Eagle is signed on to develop the retail portion, which would consist of four buildings lining Broad Street totaling about 21,000 square feet. The overall development is called “WestGate,” apparently a nod to Markel | Eagle’s nearby GreenGate development.

The company also is seeking a permit to allow food trucks and outdoor dining at the site, which is owned by Schafstedde Properties and assessed at $124,000. Hirschler attorney Jim Theobald is representing Stanley Martin on that project, and The Bay Cos. is handling civil engineering work.

Both requests are on the agenda for the Henrico Planning Commission’s meeting this Thursday, as are two others relating to another Stanley Martin project: its 126-home Lakeside Landing development beside the Brook Run shopping center on Brook Road. 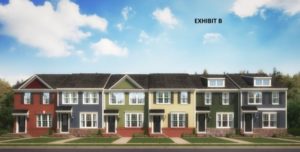 An elevation rendering of the Brook Run townhomes.

The Bay Cos. is handling engineering for the townhomes, and Roth Jackson attorney Andrew Condlin is representing Stanley Martin on the project.

The projects would add to a heavy workload for Stanley Martin in the region. The company is currently developing hundreds of condos between West Broad Landing, on the site of the former Lawrence Dodge dealership, and the nearby Wistar Glen on Wistar Road.

It recently received approval for “ReTreat at One,” a 500-home development farther north off Brook Road. And in the city, Stanley Martin is looking to build 90 two-over-two condos at North Lombardy and West Moore streets in Richmond’s Carver neighborhood.

Note: This story has been updated with additional details received after deadline.

High density for-sale condos with access to major arteries are one solution to our near desperate need for affordable workforce housing. As well, we need to extend our mass transit options so that these new residents do not clog and pollute these arteries with vehicles. Where land has become so expensive, jurisdictions might consider tax rebates to those developers who lease or sell to those below 60% of the area mean income.

Developments like this won’t solve all our problems, but if the Midlothian village plan proceeds as planned, it could be an urbanish hub that could eventually support some kind of mass transit. https://www.chesterfield.gov/874/Comprehensive-Plan