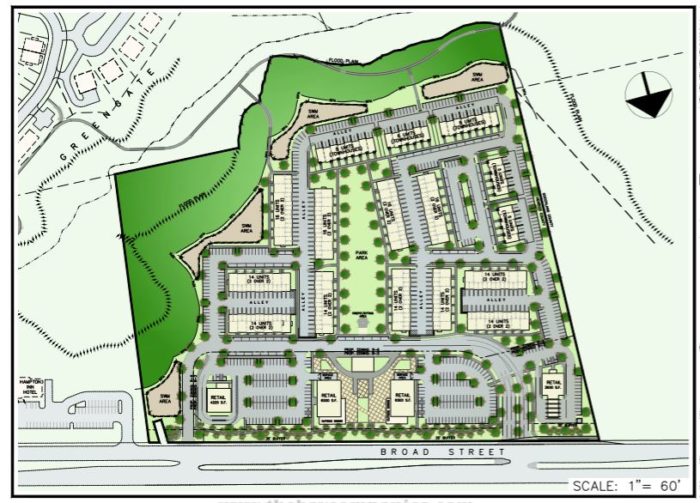 A nearly 200-home development is set to go forward following an eight-figure deal for one of the last remaining buildable tracts along Broad Street west of Short Pump.

Stanley Martin Homes closed Oct. 30 on its purchase of a 23-acre site at 12401 W. Broad St., where it’s approved to build 194 for-sale condos and townhomes as part of its planned “WestGate” development.

The transaction totaled $10.2 million – nearly double what a slightly larger nearby site went for in April, when Atlanta-based SKM LLC paid $5.85 million for 12 acres beside West Broad Marketplace.

The seller was Schafstedde Properties, which was represented in the deal by Taylor Long Properties’ Ellen Long, Robert Marshall and Kent Cardwell.

The site is just east of the Henrico-Goochland line, on the south side of Broad Street across from Stanley Martin’s Saunders Station at Broad Hill Centre condos. The latest Henrico County assessment valued the 23 acres at more than $3.77 million, with a current taxable land use value of $123,000.

Stanley Martin had been under contract to purchase the site while securing approval earlier this year for WestGate, its name apparently a nod to Markel | Eagle’s nearby GreenGate development. In addition to the homes, WestGate is planned to include four commercial buildings fronting Broad Street that Markel | Eagle is signed on to develop.

The new homes would total 162 condos and 32 townhomes. The product would be similar to what Stanley Martin has put out in its other communities, which often include “two-over-two”-style condos, in which a two-level unit is stacked above another.

It’s unclear when construction for WestGate would start. Attempts to reach Jeremy Swink, Stanley Martin’s vice president of land for the region, were not successful Wednesday.

WestGate adds to a heavy workload for Stanley Martin locally. The Reston-based builder also is developing ReTreat at One, a 500-home development off Brook Road in Henrico that recently was expanded with 111 more homes.

Other projects in the county include Lakeside Landing, a 126-home development beside the Brook Run shopping center on Brook Road; West Broad Landing and Wistar Glen, two developments off Broad Street totaling more than 300 condos; and 61 more condos at Rocketts Landing. In the city, it’s developing the 90-unit Carver Square.

Note: The headline for this story has been revised.

Seriously? You refer to this as a “housing project”?

Jackson, I’m re reading this to see the reference you quote. Im missing it. Please cite the paragraph.

we’re splitting hairs I guess but the headline reads “project” which Jackson Joyner interprets as “housing project” a term usually reserved, at least historically, for Section 8 or public housing. It’s become a racial reference. Therefore, the many down votes. The editor could have better coined it as a “development” or a “community” to which it’s referred in the article.

Those 61 units at Rocketts are in Henrico County as well, not the city.

I don’t know whether the name WestGate is a nod to the GreenGate development, but there is already a Shoppes at WestGate down the road from the new development.