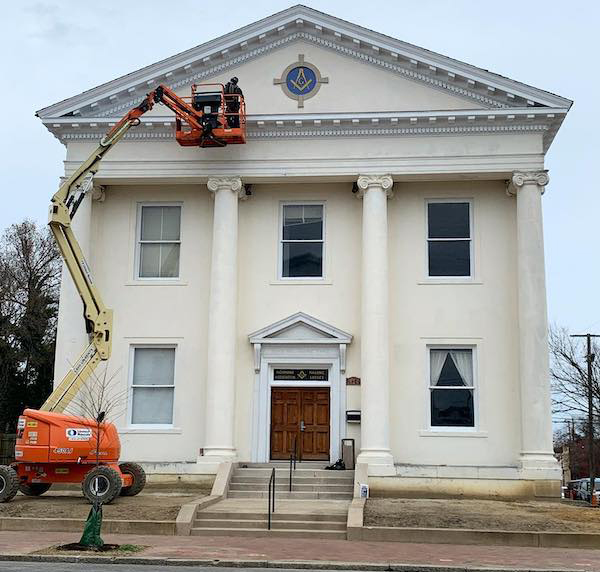 Church Hill is set to get a new brewery from Trapezium, which will renovate the former Richmond Association of Masonic Lodges building on North 25th Street. (Courtesy of Trapezium Facebook)

Amid hours of casino proposals and budget deliberations at Monday’s City Council meeting, a local brewery got the final approval it needed to bring a new taproom to Church Hill.

The council voted to grant a special-use permit for the former Richmond Association of Masonic Lodges building at 520 N. 25th St., where Petersburg-based Trapezium Brewing Co. is planning a satellite location called “93 by Trapezium.”

The approval clears the way for Trapezium to renovate the 94-year-old building, which it bought last fall for $950,000. Trapezium owner Dave McCormack needed the permit to operate a slightly larger brewery than the building’s zoning allows for. The city’s Planning Commission gave the project a thumbs up in April.

With the proper entitlements in hand, McCormack said he’s ready to get the project rolling.

“Now we’ll be doing the upfit,” he said. “We’re shooting for a fall opening.”

McCormack opened Trapezium’s flagship location in Petersburg in 2016, and a year later spawned Beale’s Beer, an offshoot brewery in Bedford.

In addition to the Church Hill venture, McCormack and his crew also are working on expanding both Trapezium and Beale’s footprint around the state.

He said they’re aiming to do a soft opening for Camp Trapezium next weekend in Amherst, a small town about an hour southwest of Charlottesville. Located on 76 acres of farmland, Camp Trapezium’s brewery is in a renovated milling building and will be accompanied by a renovated farmhouse that’s available for overnight Airbnb rental.

Meanwhile, on the other side of the state, McCormack said they’re preparing to set footings for a second Beale’s taproom in Yorktown. McCormack said he’s planning for Beale’s East to open by the end of 2021.

Monday’s City Council meeting also marked the beginning of the next step in the casino process in Richmond, with Mayor Levar Stoney presenting the winning bid from Urban One for a casino license to the council. It’s the latest procedural step ahead of a voter referendum on Nov. 2.

The council also delayed action on a few other items at Monday’s meeting, including a rezoning request from Hourigan Development for the Southern States silos; a special-use permit request from Zach Kennedy, who’s looking to build a mixed-use infill project at 1005 Westover Hills Blvd.; and a rezoning request from Samuel Spiritos and Thomas Gravely for a surface lot in Shockoe Bottom at 1801 E. Main St.

Hourigan’s request to rezone the silos is now scheduled for a vote at the council’s June 7 meeting, while the Westover Hills and Shockoe Bottom ordinances are on the June 14 agenda. The planning commission has recommended approval for all three projects.

I think this will be great for Church Hill

Long overdue for Church Hill. Who will be the next craft brewery to capitalize on these great demographics?