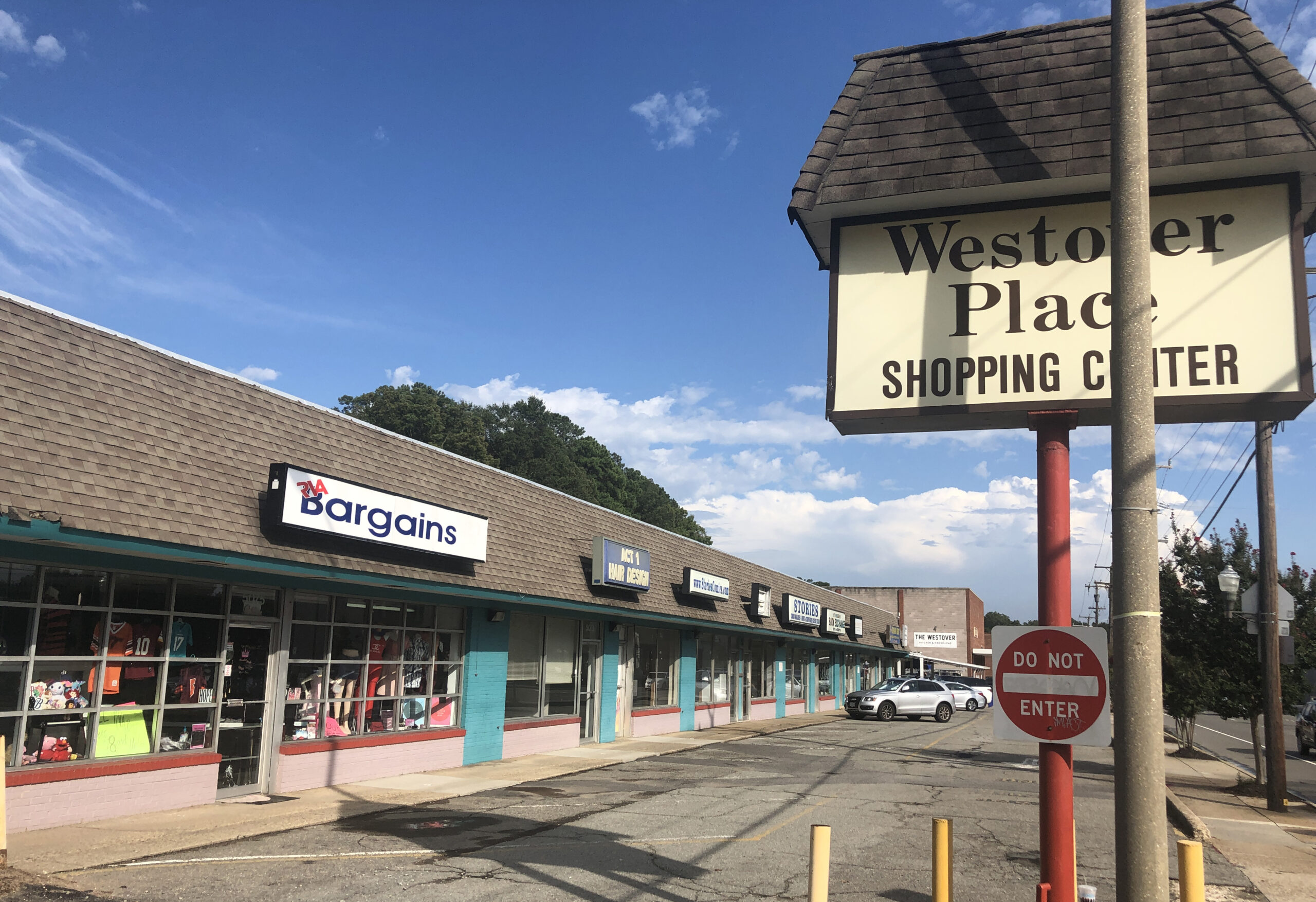 The Southside stretch of Forest Hill Avenue near its intersection with Westover Hills Boulevard continues to evolve with a new mixed-use project in the works to replace an aging, largely empty retail strip.

Local developers Michael Plotkin and Nolen Blackwood have filed plans for a three-story building that would rise on the current Westover Place shopping center site at 5069 Forest Hill Ave.

Plans call for a 30,000-square-foot structure with 30 apartments above a 7,800-square-foot ground floor commercial space, with 47 total surface parking spots around the building.

The site is across Forest Hill Avenue from Hill Standard, a separate mixed-use project that was completed last year with 16 apartments and commercial tenants such as Blanchard’s Coffee Roasting Co. and The Veil Brewing Co.

The existing 13,500-square-foot Westover Place dates back to the 1980s, Plotkin said, and in recent years many of its longtime tenants have moved out, including Stories Comics and Act I Hair Design.

Plotkin, whose family has owned the land since the 1940s, said he and Blackwood looked at the option of preserving the building but decided the most efficient approach would be to raze it and build anew.

“It’s a traditional retail shopping center from back in the day. It’s an older building and there’s really no way to keep it,” Plotkin said. “It’d be like surgery to try to repurpose it.”

Plotkin said he and Blackwood are under contract to purchase the property through a separate entity. Blackwood, through his family’s namesake development firm, has projects all over the region, including Winterfield Crossing in Chesterfield, The Eclipse in the Fan and the forthcoming Caravati’s renovation in Manchester.

A rendering of the planned three-story building that would rise right across from The Veil Brewing Co.’s Southside taproom. (Courtesy of city documents)

Plotkin said they’re hoping to begin demolition in early 2022, after which a year-long buildout would take place. The project cost hasn’t yet been determined.

Lory Markham with Markham Planning is serving as a planning consultant. Walter Parks Architects is designing the project. Parker Design Group is the civil engineer. Plotkin said they haven’t yet selected a general contractor.

The new apartments are currently planned to be one-bedroom units and rent at market rates, and Plotkin said he could see a restaurant, small gym or hair salon doing well in the commercial space.

This project isn’t the first time the Plotkin and Blackwood families have worked together in real estate.

“My grandfather actually knew Nolen’s father Willis when they were working for Safeway in their real estate department,” Plotkin said. “There was a mutual respect between my grandfather and Nolen’s dad. We wanted to continue that relationship.”

Great idea! I hope this works out and they continue to work together on other Plotkin centers. The aging and largely empty one on Staples Mill Road in Henrico comes to mind.Nolan is a busy guy these days.

Eh, replacing a dated strip with an updated strip and rentals above. Still basically a suburban strip center with parking in front. The development across the street set a standard that I wish they would follow here. You don’t need to keep all the parking in the front like a suburban strip center. Move things around. Do something with more imagination. Actually create an inviting space. So far, this proposal does none of those things. If nothing else this pandemic has shown you need outdoor dining options to attract good restaurants. I see none of that here. True lack of… Read more »

Yeah we are getting these modern row homes near me with a similar design look. I realized (and on our new neighbors it is white) but the gray (square and rectangular) panels in the designs are just a type of plastic/vinyl siding. Most of this infill lack any design or character. I personally have no issue with the parking in the front; this is a throw back in an automobile suburb and it allows the existing tie into the other parking lots and retail in that block.

This is an incredibly uninspired proposal: just another box of apartments above a strip of stores without adequate public transportation in an area already short on parking and very unsafe for pedestrians.This strip mall has been in decline for year, and the benign neglect has done its work. The place was allowed to become run down. Are we to expect better from owners now?

30 apartments plus 7,800 square feet of commercial space, and ONLY 47 parking spots? Come on that is just greed.

Not if you think we should ween the city off of automobile use. We should make it harder to drive and park, thus incentivizing other forms of transit. There are no cities in the world with robust transit systems where is also very easy to drive and park.

Please enter reality. The people who live in these apartments and who visit the retail center will mostly be traveling by car. There is not enough parking and the result will be parking on the north side of Forest Hill Ave and in the neighborhood behind it. All because the developer wants maximum profit on his space – they do not care at all about the neighbors.

I understand what you are saying and support alternate forms of transportation, but people still need cars and need to park them. This type of greed just pushes people out of the city where there is more parking available.

Stop putting the onus on residents for our lousy mass transit system. If it’s anyone’s fault it’s the businesses, medical offices, etc that have chosen to locate in suburban office parks with no access to transit. I own a car because the Richmond Metro area has one of the worst public transit systems in the entire nation. I would love to be able to leave my car behind and stop driving but it’s not possible. I’ve tried.

The other hurdle, with respect to the urban design goals you’ve listed in prior comments, is that this property is zoned B-2. The Veil property across the street was amended to Urban Business which allowed the building to sit forward and not have the 25ft setback and/or parking requirements that the above project cannot do without going through the rezoning process.

Of course, this could be pursued for the project in question, but now I’m spending somebody else’s time and dollars.

That shows one of the many problems in the city’s zoning code right there.

The zoning code tries to force the city to be like short pump. It’s a massive failure of urban planning

Where will people park? The Pulse doesn’t run by here. I suppose overflow parking will be in the residential blocks directly behind this spot?

Forest Hill has frequent buses – the 2A, 20, and 2B stop near this development. Richmond 300 identifies this area as a transit oriented development node.

Dates from the 1980s? Why does it feel much older than that? And what was there before? And is the convenience store at the end going to be updated?

Please, for the love of god, reconsider putting a strip of parking in front. Have we learned nothing from decades of failed urban design? Do as the development across the street did.

30 apartments means 30 to 60, or more, new vehicles added to the neighborhood. Of course people will be parking in the neighboring spaces. It was always difficult to park there when the book/comic space was open. I’m not sure we need any more apartments over here. It’s pretty saturated with them as is. I see apartment buildings rising up everywhere like mushrooms. Where on earth are all these people coming from?