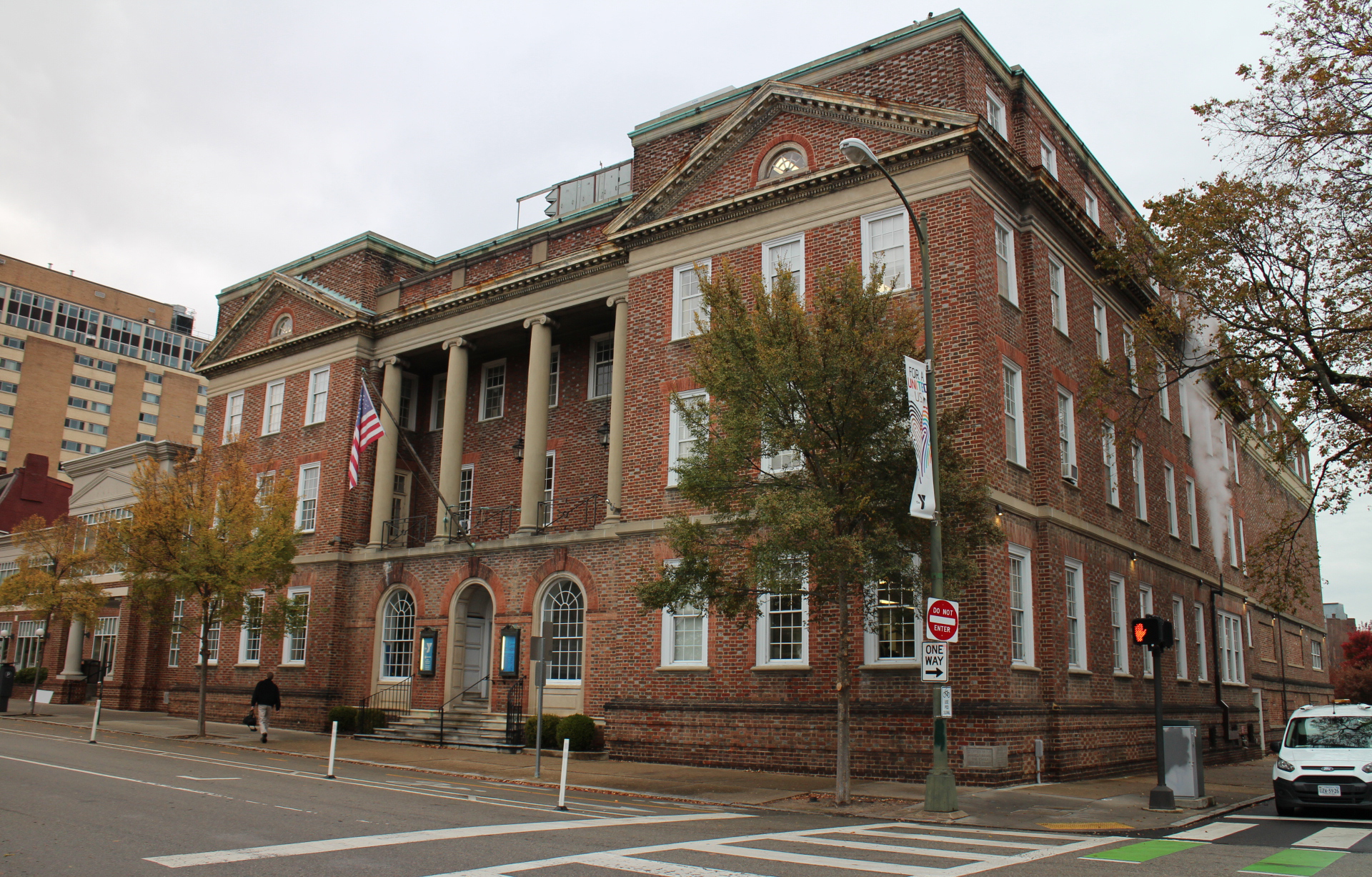 The building at Franklin and Foushee streets has housed the downtown YMCA since 1942. (Jonathan Spiers photos)

After nearly 80 years in its downtown home base, the YMCA of Greater Richmond is about to get some new roommates as the anchor of a planned mixed-use redevelopment.

The nonprofit is working with developers George Emerson and Phil Roper on a project that would add market-rate apartments to its downtown building at 2 W. Franklin St., and to at least some of its adjoining parking lot properties.

The developers are under contract to purchase the properties, which fill the bulk of the city block that includes the main branch. An additional Y-owned parking lot across Franklin is included in the deal, which Emerson confirmed to BizSense this week.

The downtown branch would continue to operate in the building, with the Y’s corporate offices relocated to free up space for some of the apartments. A location for the offices has not been determined, YMCA spokesman Barry Saunders said.

“We’re excited that this historic building that has served the community so well for the past 80 years is going to get a major renovation as part of the overall project,” Saunders said, adding that the branch would remain the centerpiece of the building. 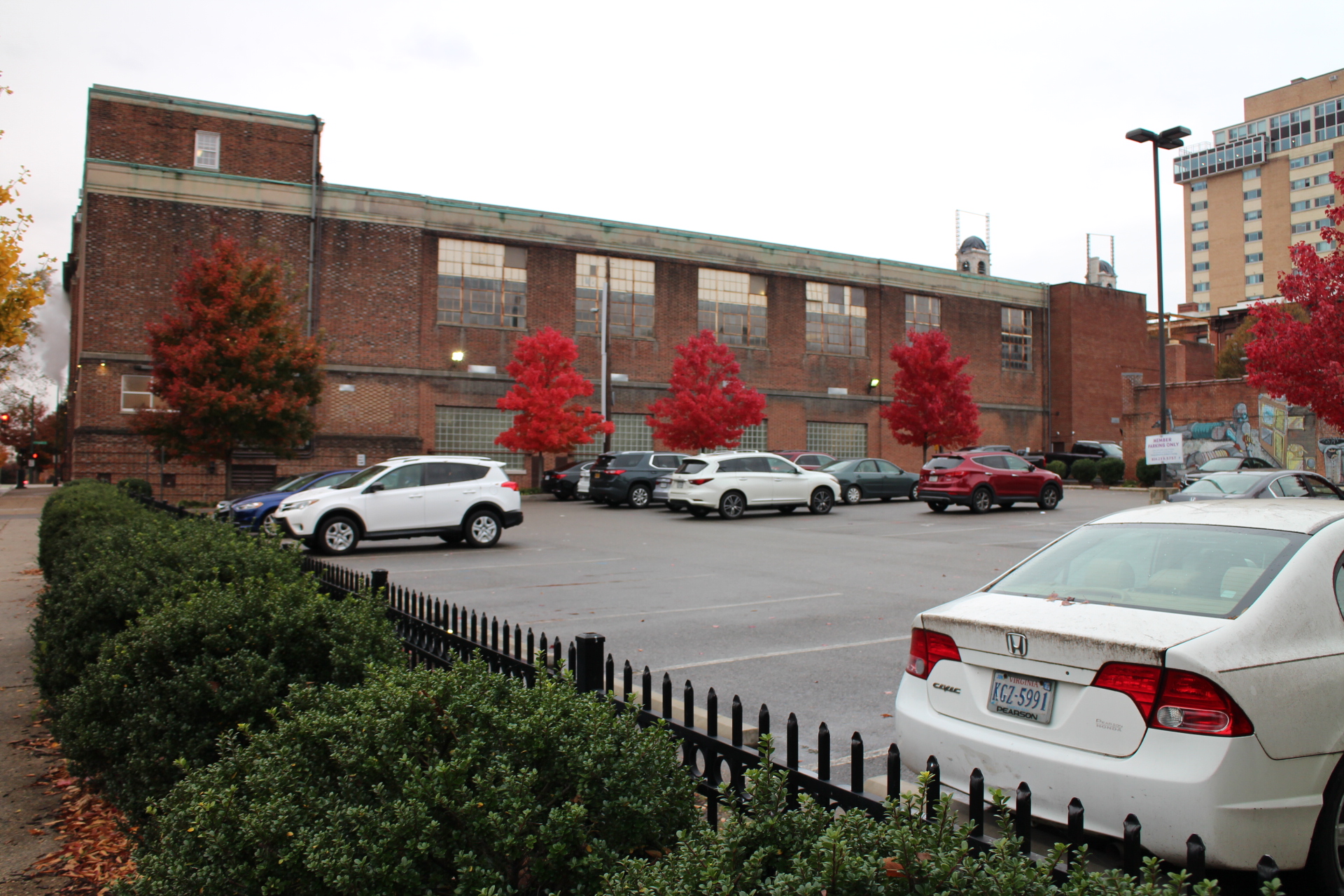 A parking lot behind the building would be part of a redevelopment project adding apartments.

“We also think that it’s pretty cool how this takes the downtown Y back to its community-serving roots in a very modern way, because the location’s going to once again offer residences alongside the programs that we do,” Saunders said, referring to the Y’s history of providing rooms for lodging. He said his office is in one of the building’s former dormitories.

Opened in 1942, the Franklin Street building has served as home base for the nonprofit that dates back to 1854. The four-story, 98,000-square-foot structure houses various facilities including a gym, pool and squash courts, which were converted from racquetball courts in a 2018 renovation.

A few years earlier, the Y had been planning a $20 million expansion of the building, but scrapped that idea in 2014. The expansion would have filled the parking lot at Foushee and Grace, where the Y had demolished three buildings after buying that property in 2008.

Emerson said the project remains in the design stage but would likely include new-construction apartments above structured parking in that lot, if not the Y’s other properties. The nonprofit also owns the parking lots lining Adams Street on the block, in addition to the lot across Franklin.

The city most recently assessed the Y’s building at $6.85 million, property records show. Nine other parcels that make up the Y’s 2.2-acre assemblage are assessed at $3.44 million collectively, bringing the total property’s assessed value to about $10.3 million. 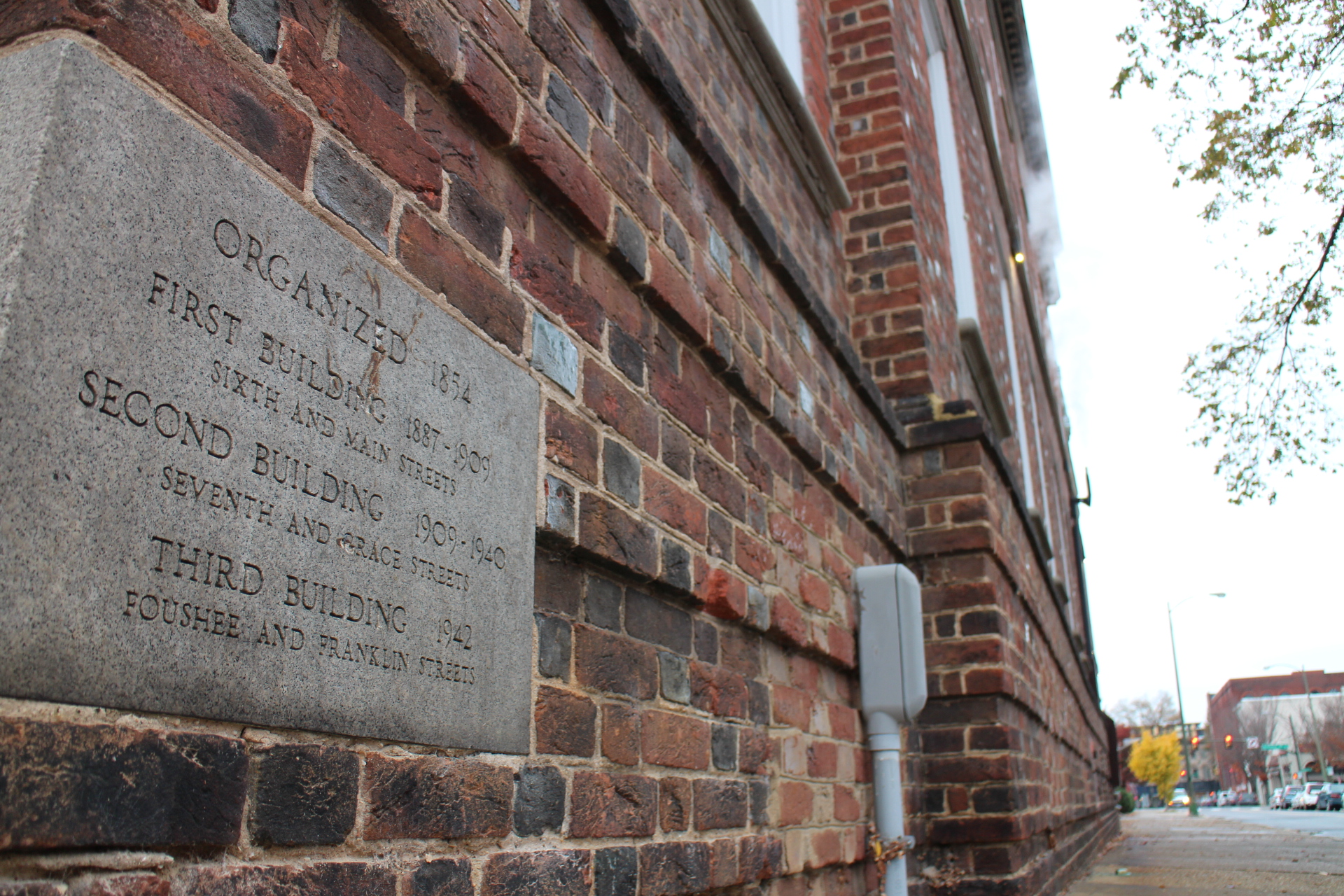 A cornerstone notes the building replaced previous locations for the YMCA, which dates back to 1854.

“The YMCA’s going to maintain a presence there, but we’re going to be rehabbing the building, and building in the parking lots,” Emerson said, adding that he’s aiming to finalize drawings in coming weeks. He said he’s hoping for the project to get underway next spring.

“We’ve been working on this project for a couple years, and it’s just now coming to fruition,” he said. “The Y was looking at doing some different plans over the last few years, and I think the YMCA is one of those organizations that we try to work with all we can. I think it’s going to be (a project) everybody’s going to like.”

Emerson and Roper’s other recent developments together include Moore’s Lake in Chester and the Vue at Westchester Commons apartments. They are working on the Y project with Richmond developer Tom Papa and KBS Vice Chairman Dennis Lynch, who Emerson said are investors in the project. Emerson and Lynch worked together on a mixed-use conversion of a former office building at 6 N. Sixth St.

“We’re excited about getting it going,” Emerson said. “I think Tom Papa will be a good addition to have with us. We haven’t ever done a development together, so I think it’ll be fun doing that with him, too.” 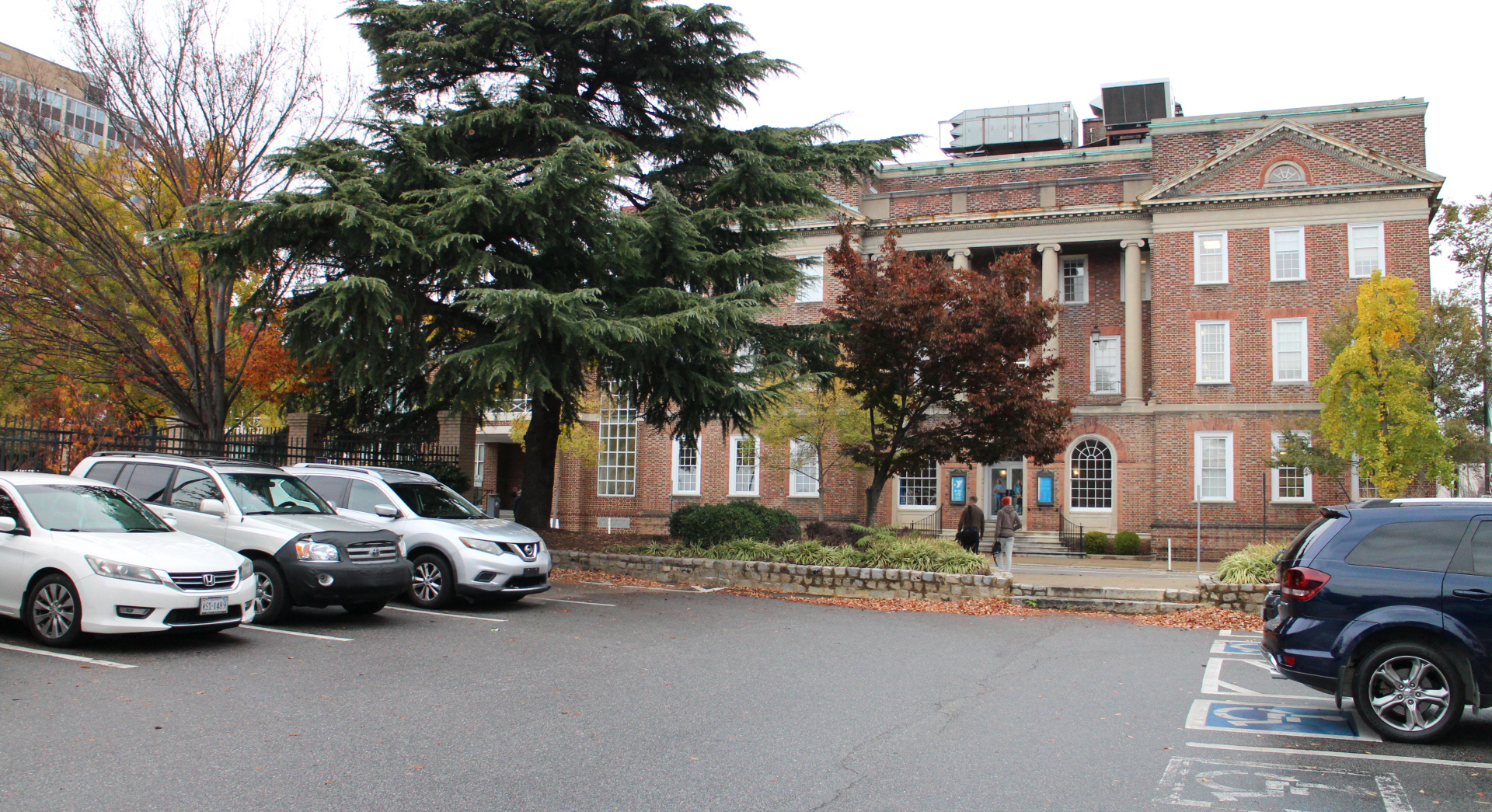 The YMCA’s assemblage includes a parking lot across Franklin Street from the building.

Emerson said it’s too early to estimate a project cost or a total number or sizes of the apartments. Walter Parks Architects is designing the project.

Saunders said the project would include a renovation of some of the Y’s facilities, including new locker rooms and group exercise studios, and improvements to wellness rooms and weight rooms. He said a dollar figure for those improvements was not yet available.

“I think it’s going to be really a great addition to the neighborhood here, and it’s going to continue a long tradition of serving our community well from this location,” Saunders said. “We feel like we’re setting ourselves up here to evolve our offerings to better reflect and serve the needs of the community, hopefully, for another 80 years.”

The project comes as other moves are being made in the neighborhood.

Directly across Franklin, the century-old Second Baptist Church building is being considered for demolition by the owner of the adjacent Jefferson Hotel. And across Foushee from the Y, a half-acre parking lot was recently purchased by a Philadelphia-based firm for $2.87 million.

Note: This story has been updated to mention parking facilities that are planned as part of the new construction. The architecture firm on the project also has been corrected.

Kind of worried about the loss of parking. Those lots are all usually pretty full…

This development sounds great and I’m always glad to hear about less surface parking lots, especially in downtown/Monroe Ward! It sounds like we might get to see renderings in early 2022.

This development is one of many now proposed to fill parking lots all over downtown. As I followed the links in the article, I came upon one half-acre lot that sold for roughly $3M. I follow sales prices closely and I don’t believe I’ve seen one at that price before. I’m stunned, but I’m pleased.Richmond has been discovered!

Now folks like Barney Fife can finally get that corner room at the Y. 🙂

I share David’s concern about parking, but given the Y’s track record, I’m hopeful that the new developments will accommodate Y users as well as new residents.

I also wonder if there could be some ground level retail? Maybe space that private trainers or fitness-related businesses, like a juice bar, could occupy?

Is it too much to hope that the renovation will also do something about the ill-placed HVAC on the roof of the existing building?

I couldn’t agree more about the ‘ill-placed HVAC on the roof’! It’s a black eye on such a nice building.

“I think it’s going to be really a great addition to the neighborhood here, and it’s going to continue a long tradition of serving our community well from this location”. Like affordable housing? Wouldn’t that be nice as a partnership with the Y instead of people lining pockets of those who don’t give a hoot about the community? Also, where in the world are Y members going to park?

Parking? The article states, “...would likely include new-construction apartments above structured parking in that lot, if not the Y’s other properties. The nonprofit also owns the parking lots lining Adams Street on the block, in addition to the lot across Franklin.”