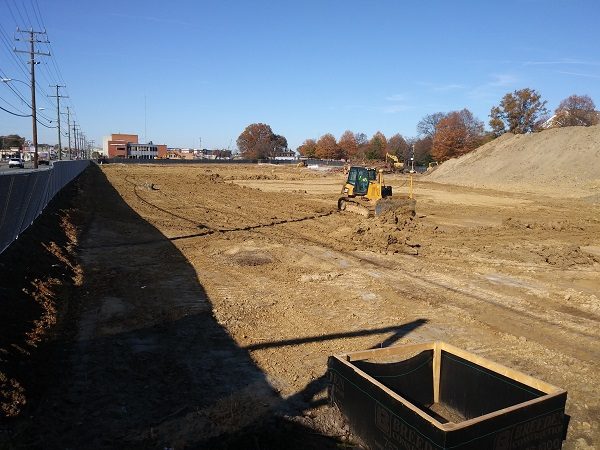 The fields in front of the UMFS campus are being prepped for the development. (Jonathan Spiers)

One of the largest tracts of undeveloped land along West Broad Street in the city is making way for a mix of new construction.

Site work has started at the front of United Methodist Family Services’ campus, where Spy Rock Real Estate is leading the development of the fields lining Broad Street west of Hamilton Street, on the other side of Interstate 195 from Scott’s Addition. Spy Rock entered into a 99-year lease for the 4.5-acre tract that will help UMFS fund a new school building and treatment center on the opposite end of its 33-acre campus.

Spy Rock’s portion of the project, which was announced last year, has grown since then to include a 128-room hotel and two four-story buildings with apartments above ground-floor commercial space, according to a release from UMFS. 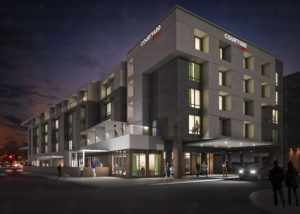 A rendering of the hotel at the corner of Broad and Hamilton streets. (Spy Rock)

The hotel, a Courtyard by Marriott to be operated by Henrico-based Kalyan Hospitality, will be located at the corner of Broad and Hamilton. The other two buildings totaling 250,000 square feet will house 250 apartments – 163 one-bedroom units and 87 two-bedrooms – along with office space, a restaurant and a coffee shop.

UMFS said the additions are the first improvements to the campus in 65 years. Construction will begin early next year and is scheduled for completion in 2020. 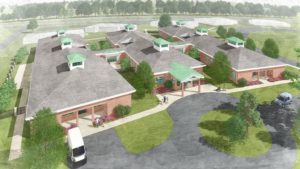 A rendering of the planned Child and Family Healing Center – one of two new buildings to be added to the campus. (Courtesy UMFS)

RRMM Architects is designing those buildings, which are estimated to cost between $18 million and $19 million. Additional buildings would follow in the next 10 years, with funding coming from a mix of revenue from the lease, campaign fundraising and debt reductions, UMFS has said.

Poole & Poole Architecture is designing the Spy Rock buildings, cost estimates for which have not been disclosed. Breeden Construction is the contractor.

Spy Rock was selected over five other firms UMFS considered for the project. The nonprofit announced its intention to develop the site as part of a campus-wide update in 2014. It secured rezonings to accommodate the projects in 2017. 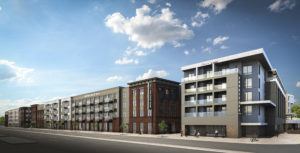 A rendering of the hotel and other Spy Rock buildings as they’d appear along Broad Street. (Courtesy Spy Rock)

Spy Rock’s other projects include its Preserve at Scott’s Addition and Symbol developments across the expressway, as well as a retail-office conversion of the former McKinnon and Harris building at 1806 Summit Ave. The firm also redeveloped its 376-unit Midtown apartment portfolio before selling the properties last year for a combined $56.1 million.

The UMFS project adds to other development occurring along the corridor. Next door to the campus, Kotarides Cos. is getting started on site work for an apartments-and-retail conversion of the old Department of Game and Inland Fisheries offices. Plans call for the existing buildings to be razed and replaced with three four-story buildings that will include 238 apartments and ground-level retail. 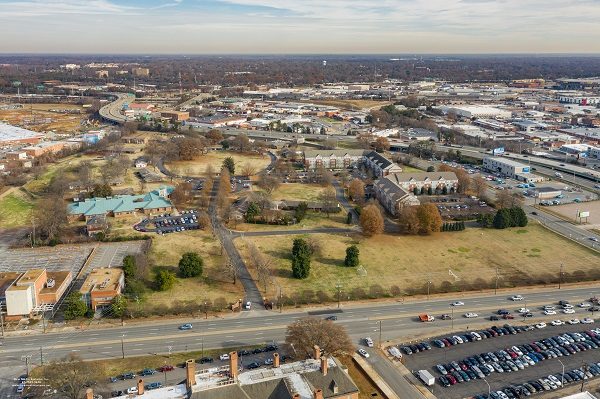