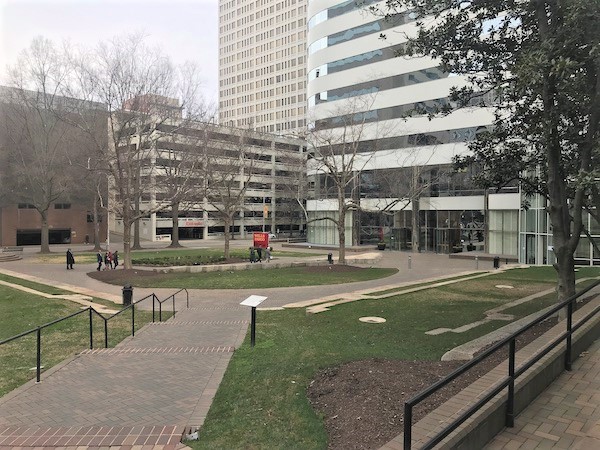 The outdoor plaza in front of Two James Center was not included in the 2017 deal. (Photos by Mike Platania)

Nearly three years to the day after buying the James Center, Bill Goodwin’s Riverstone Properties has dropped nearly $8 million on a pair of parcels next to the three-building office complex.

Riverstone bought James Center’s three towers, which total nearly 1 million square feet, in January 2017 for $108 million, after the complex had been threatened with foreclosure. Riverstone promptly set out with a renovation plan for 1980s-era properties. 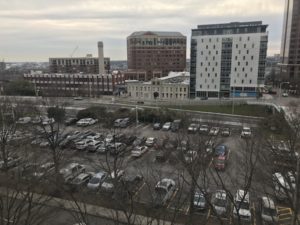 Riverstone also bought a roughly 1-acre surface parking lot along Canal Street, but it’s unclear what its plans for it are.

The plaza and parking lot evidently were not included in the 2017 deal, and until last week’s sale had continued to be owned by entities tied to JEMB Realty, the company that had owned James Center since 2005 before turning the three towers over to its noteholder in 2016 in lieu of foreclosure.

It’s unclear what plans, if any, Riverstone has for the newly acquired land. Bruce Boykin, James Center senior asset manager, declined to comment and no plans for the parcels have been filed with the city.

Riverstone has been busy lining up new tenants for James Center.

On the office side, South State Bank recently signed on to nearly double its local headquarters in One James Center, while health care giant HCA is moving its local offices into the building in the former Bull & Bear Club.

Arby’s and Nathan’s Custom Tailors closed in the James Center at the end of 2019.