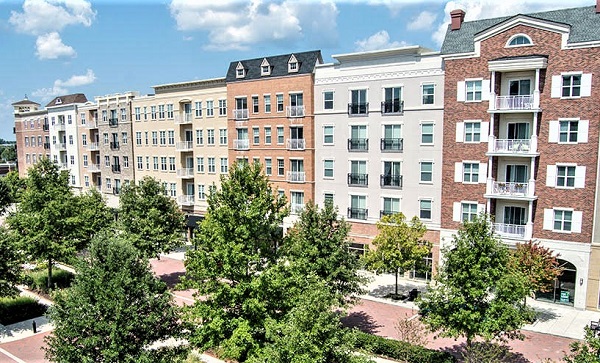 Nearly a quarter of a billion dollars just flowed into the region with the purchase of three apartment complexes — the largest of which hit a record price tag for multifamily properties in Henrico County.

That deal came on the heels of the sale of the Copper Spring apartments in western Henrico for $85.7 million, and the Sterling Beaufont apartments in South Richmond for $44 million.

The buyer of the 339-unit Flats at West Broad Village was an entity tied to Capital Square, an Innsbrook-based firm that’s been on a big-dollar buying streak of late.

At over $327,000 per door, the purchase marks the highest overall price ever paid for an apartment property in Henrico, and the highest per-door price. The complex at 3930 Wild Goose Lane was most recently assessed by the county at $73.2 million.

It’s the second time the Flats have changed owners in two years. In 2019, Atlanta-based RangeWater Real Estate, then known as Pollack Shores Real Estate Group, bought the property for $75.5 million and pledged to pump in an additional $4.5 million in capital improvements to the apartments.

Whitson Huffman, Capital Square’s chief investment officer, said Wednesday the company was drawn to the deal in part because of the apartments’ location and access to nearby restaurants, grocery stores, and other retailers. 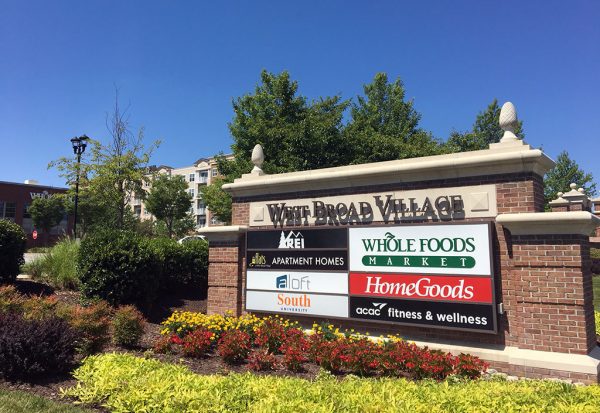 West Broad Village’s commercial side is anchored by retailers like Whole Foods and REI.

West Broad Village’s commercial side, anchored by retailers like Whole Foods and REI, was not included in the sale.

Huffman said Capital Square will be continuing the apartment renovations that RangeWater began.

“We also thought there was a clear path to enhance investment value through value-add renovations on unit interiors,” Huffman said. “We’ll also be making some select upgrades to some other amenities.”

The deal closed Oct. 15 and was recorded with the county Oct. 20. Anthony Liberto and Jorge Rosa of Cushman & Wakefield’s Mid-Atlantic Multifamily Group brokered the deal.

RangeWater declined to comment. Per its website, the company has no more holdings in the Richmond region.

Earlier this year, Capital Square paid $84 million for the 301-unit Canopy at Ginter Park apartments in the city, and in late 2019 it spent $103 million for a 373-unit complex at West Creek in Goochland.

While sizable, the Flats’ purchase isn’t the largest commercial sale to close in Henrico this year. In the spring, a Singaporean REIT bought Bank of America’s local campus for $208 million. 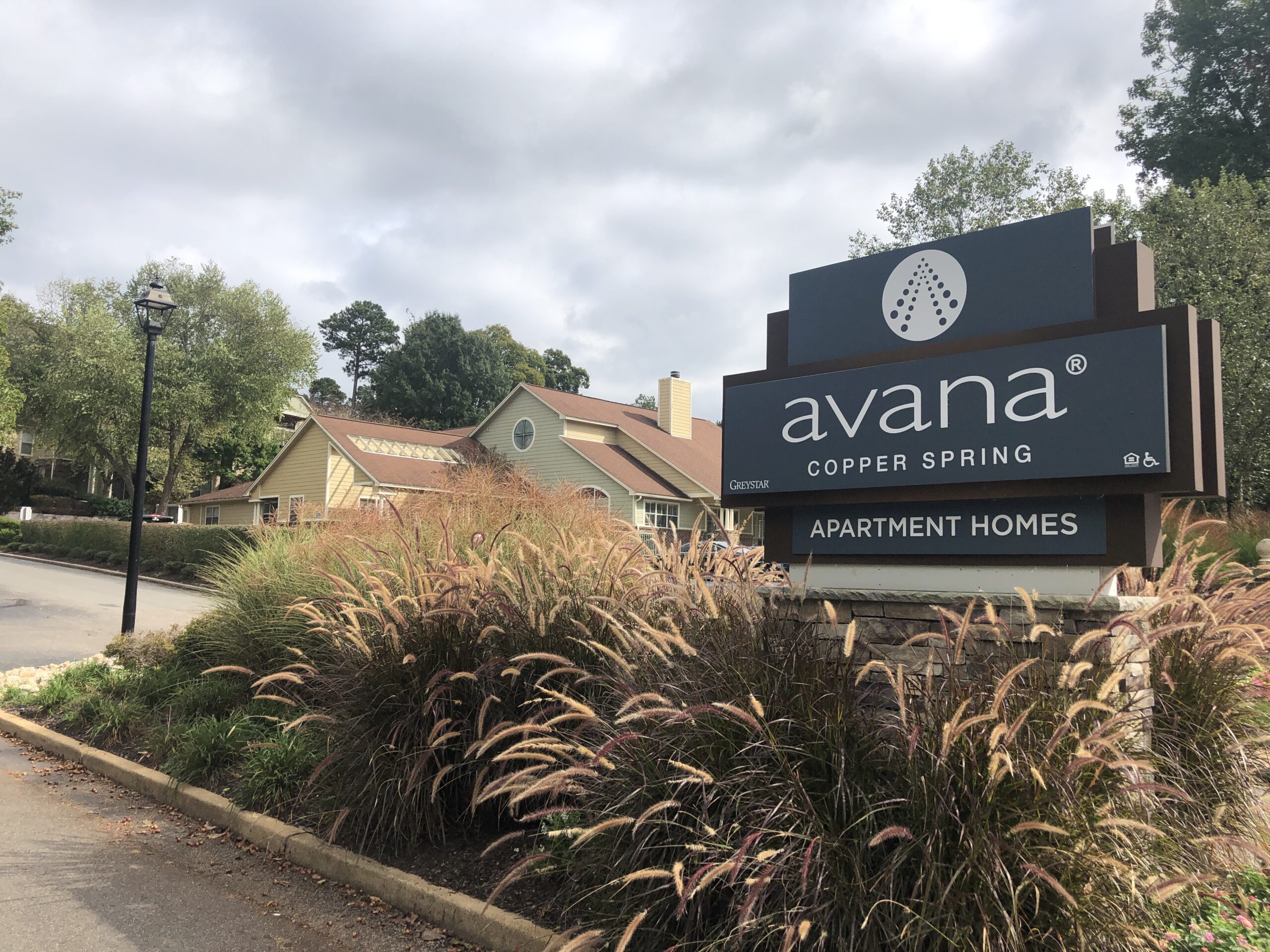 Despite closing less than two weeks ago, Greystar has already rebranded and changed signage for the apartments in Henrico. (Mike Platania photos)

Now branded as Avana Copper Spring, the complex’s 366 units span 23 buildings on 30 acres along Mayland Drive west of Parham Road. The deal equates to over $234,000 per door.

The seller was Washington-D.C.-based StoneBridge Investments, which bought the property for $54 million in 2017.

The property was most recently assessed by Henrico at $47 million. Greystar’s purchase was recorded with the county on Oct. 5.

Greystar, which is also busy in Scott’s Addition developing an entire city block into a 350-unit mixed-use project, counts nearly 750,000 apartments in its global portfolio. Its other local holdings are the Avia and Everleigh apartments, both of which are in Short Pump. 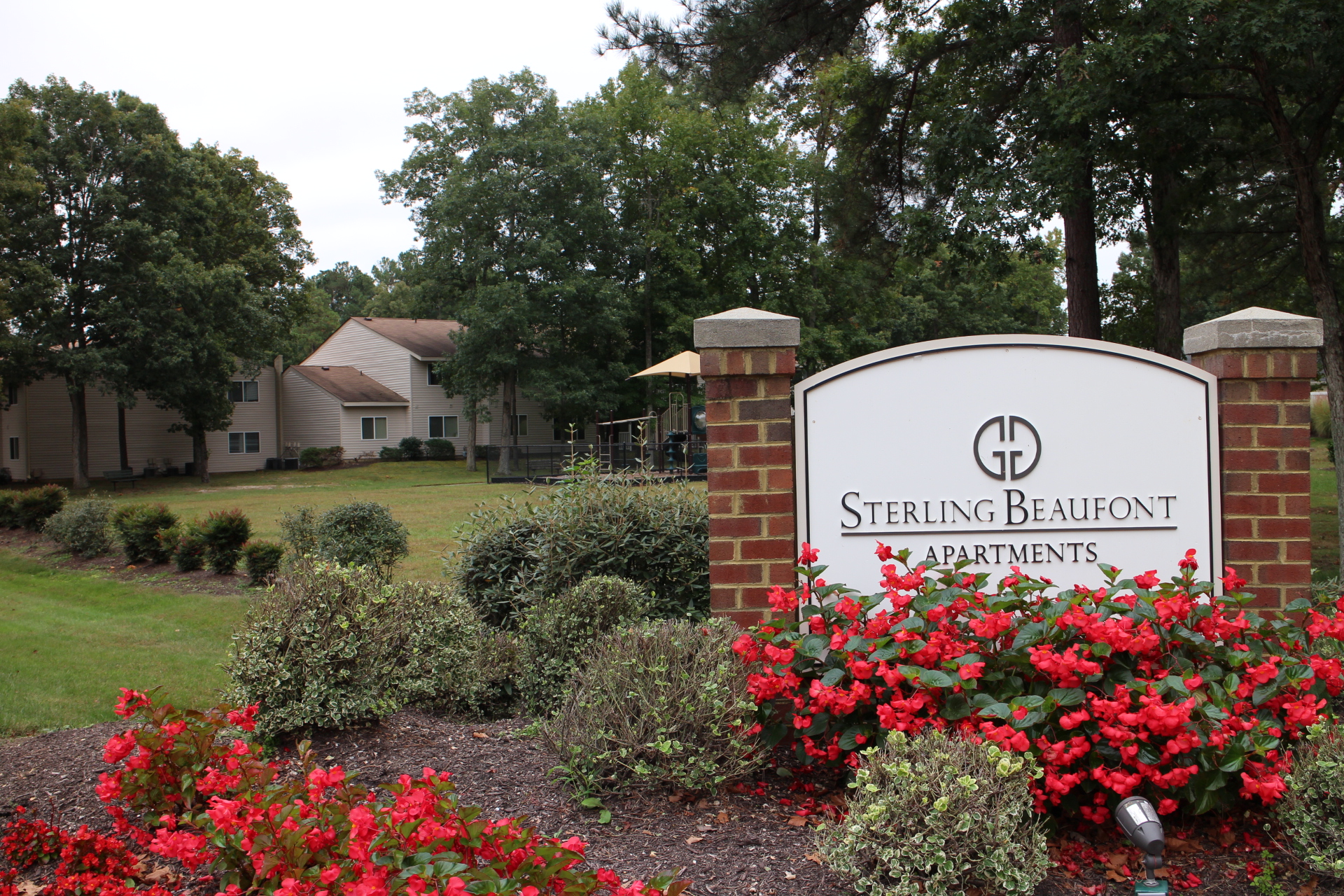 Over 300 apartments on 22 acres in South Richmond also changed hands earlier this month.

Over in the Hioaks neighborhood of South Richmond, the Sterling Beaufont apartments at 6851-6901 W. Carnation St. sold last week. The 312-unit complex traded hands for a total of $44 million in two separate deals that closed Oct. 7 and 8, city records show.

An entity tied to Utah-based NorthRock Cos. was the buyer, with North Carolina-based Grubb Properties the seller. Grubb bought the complex, then known as Beaufont Oaks, in 2014 for $18.5 million.

NorthRock arrived in the Richmond region in late 2020 and has now spent $169 million on three apartment complexes. Prior to the Sterling Beaufont deal it bought a pair of complexes in Chesterfield: the Belvedere and River Forest apartments, for $67.3 million and $57.6 million, respectively.

Calls and emails sent to both NorthRock and Grubb Properties went unreturned.

I’m amazed the numbers work at 327k per door, I wonder what the cap rate was?