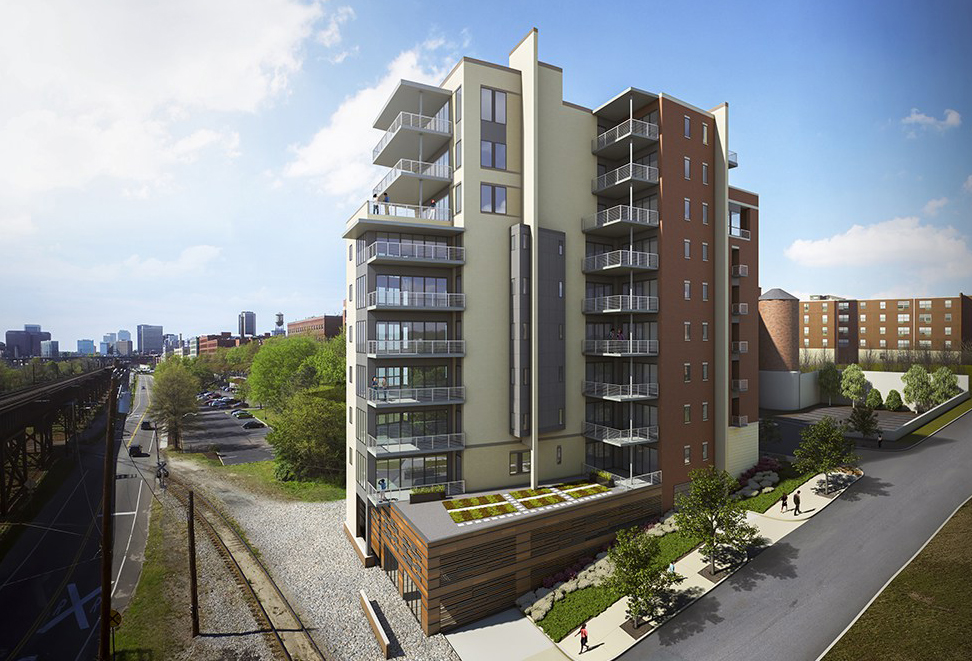 A rendering of the view from Canal and Pear streets. Courtesy of One South Realty.

Units in a new condominium tower planned at the end of Tobacco Row are hitting the market, even before the $10 million project has received city approval.

But the project, presented publicly last September, has yet to receive a special use permit from the City of Richmond needed for construction to go forward.

Developers David Johannas, Jerry Peters and Howard Kellman filed an application for the permit early this year, and City Council introduced the request at its meeting Monday. City Council referred it to the planning commission, which will consider it July 18. The site currently is zoned for manufacturing.

Johannas, a local architect, serves on the commission and said he would recuse himself when the request is considered. 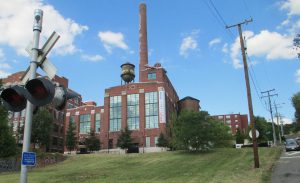 The 11-story tower would be built on a vacant lot downhill from the Lucky Strike building. Photo by Jonathan Spiers.

The developers have spent months securing letters of support from the Shockoe Bottom and Church Hill neighborhood associations. With those letters received, Johannas said the project is more likely to receive the permit, hence their decision to start marketing the units.

“We spent a lot of time in Church Hill. We’re very sensitive to their concerns,” Johannas said. “The scale of the building is really small based on the footprint. I don’t see why we’d run into problems at this point.”

The developers are marketing the condos with One South Realty, which held a launch event this month. One South founder Rick Jarvis said it’s not unusual to list projects before they’re approved.

Jarvis said that is done in most cases “provided that there is substantial agreement from the neighborhoods that are involved in it.”

“There’s always some risk, but it’s risk we’re willing to bear, simply for the timing of it. We can be marketing these and working with buyers and the like concurrently with the SUP process,” Jarvis said. “The development team is obviously confident, and we’re attacking this as if there really is no understood risk that could derail the project.”

A similar scenario played out for Citizen 6, a row of modern homes in the Fan that One South also sold. Another One South-supported project, 7west in Manchester, was marketed prior to city review, though Jarvis noted those townhomes are being developed by-right, meaning they do not require zoning or permit approval.

Developer Jeremy Connell recently closed on the half-acre 7west property, at the south end of the Manchester Bridge. He purchased it for $925,000 and plans to start demolition and construction next month.

Johannas said he wanted the units listed before summer, as spring is traditionally the busiest home-buying season.

“It’s been six months since we applied to the city,” he said. “The process is taking a little longer than we anticipated, and we just really felt it was important that we get this out in the marketplace in this season. 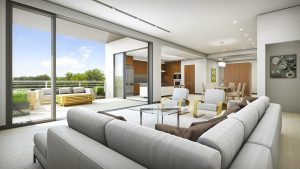 The condos will feature full-width sliding doors opening out to balconies. Rendering courtesy of One South Realty.

Johannas said support for the project came quickly from Shockoe Bottom, whereas the Church Hill association required more time. He said the building’s height, consistent with other elevations along Tobacco Row, passed muster with the group, which was among those that fought a since-withdrawn proposal by David White of Historic Housing for a 13-story condo building on the opposite side of Pear Street.

The half-acre lot for One Shiplock, which the development group has owned since 2012, is on a downslope along Pear Street and across Cary Street from the Lucky Strike Power Plant building. Due to that topography, One Shiplock will be 11 stories on the side facing the river and Great Shiplock Park, and nine stories on the side facing Cary Street and Church Hill.

“We had to respect the view from Church Hill very carefully,” Johannas said. His architecture firm, Johannas Design Group, designed what he described as modern and unique, while also related to the architecture of the former tobacco warehouses for which Tobacco Row is named.

Johannas has partnered with One South on several projects since designing its offices on West Main Street in the Fan. He recently worked with the firm on the TriBeCa townhomes in the Randolph community that he developed with One South associate broker Tom Rosman and his wife Michelle Rosman.

On One Shiplock, he’s partnering with Peters, a veteran Richmond developer who recently completed the Scott’s Edge apartments in Scott’s Addition, and Kellman, of The Edison Company, whose projects include the 8th & Main apartments downtown and the underway redevelopment of the former GRTC bus depot on West Cary Street.

One Shiplock is the 16th condo collaboration for Kellman and Peters, whose projects include downtown’s Gotham Condominiums, also designed by Johannas.

If approved in July, Peters said construction on One Shiplock would begin after about four months, allowing time for permitting. He said construction would wrap up in less than a year, with units occupied by the last quarter of 2017.

Purcell Construction, the builder behind the Terraces at Manchester, signed on as the builder and contractor for One Shiplock.

Once complete, One Shiplock will add more homeownership options that Johannas and Jarvis say elude Shockoe Bottom, where housing consists primarily of loft apartments and other rentals in former warehouses and new construction. While those have been marketed primarily to younger renters, they said the condos would attract more buyers to the Bottom and add to the area’s demographics.

“We’re seeing the city weaving together,” Johannas said, noting the addition of Stone Brewing and the Virginia Capital Trail that he said link the Bottom with Rockett’s Landing. “The breadth of lifestyles is going to be extraordinary.”

It would be great to see more affordable condos in Shockoe Bottom. Yes, the lofts and rentals are marketed to young professionals and students but there are many who would love to stay in the area but purchase their own place. Right now, there are no options. Hopefully these condos will open up the door to more condos in lower price ranges.