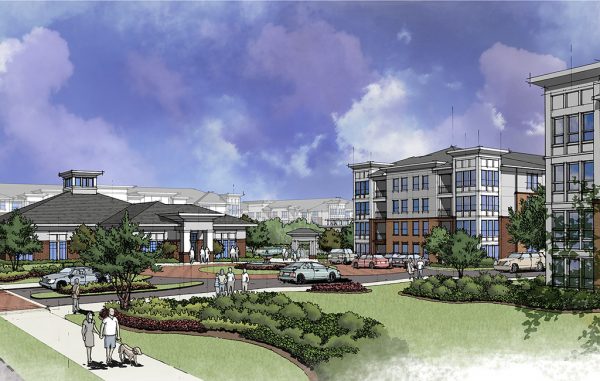 A rendering of the planned 450-unit apartment community on Watkins Centre Parkway in Chesterfield. (Castle Development)

The development train kept roaring this year across the Richmond market.

There’s not enough space in this section to scratch the surface of the number of apartments that were proposed, under development or delivered in 2018.But trust us – it was a lot.

Nowhere was it more prevalent than in four sections of the region: Midlothian, Manchester, Scott’s Addition and Northside. Among the largest of those were a $90 million, 450-unit apartment project along Watkins Centre Parkway in Chesterfield and a proposed seven-building, 289-unit community on 15 contiguous parcels totaling about 7.3 acres near the Lee Bridge at 1400 Railroad Ave. in Manchester.

With demand rising for urbanized areas, it was back to the drawing board for area planners to carve out appropriate zoning for several neighborhoods experiencing robust growth and business interest. 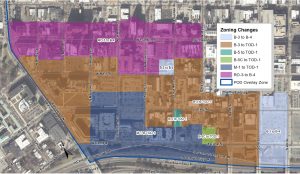 Accelerated by the arrival of bus rapid transit, city planners unveiled a consolidated proposal to rezone properties in Monroe Ward, the part of downtown between Belvidere and Ninth streets, and south of West Broad Street to the Downtown Expressway. The changes have density and height in mind, as they would create just two zoning districts in that designated area: B-4, the business zoning that already covers much of the ward; and TOD-1, the “transit-oriented nodal district” that the city last year applied at Scott’s Addition, primarily along Broad Street and the Boulevard.

City planners also shifted their rezoning efforts to Manchester with the arrival of the B-5 Central Business District – a designation that increases the allowable building heights from three or four stories to a maximum of five, along with changes to parking requirements.

Planners are looking to help redevelopment by providing flexibility in the county’s zoning ordinance to entice more mixed-use and entertainment options in the vicinity.

It appears that after years of chipping away at the neighborhood’s perception for high crime and violence, Northside’s Brookland Park continued to gain more traction for new development in 2018.

A string of announcements through the year helped bolster the historic neighborhood’s credibility in the development scene, including the pending arrival of Safety Team Brewing at a defunct car wash site at 310 W. Brookland Park Blvd. 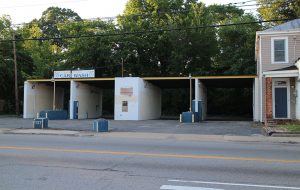 Safety Team Brewing is planning to open on the site of a former car wash at 310 W. Brookland Park Blvd. (Jonathan Spiers)

Boho Studios has signed a lease to open a location at 125-127 W. Brookland Park Blvd.
The location will add to owner AnnMarie Grohs’ two other studios in Richmond.

Savage Apparel Co. purchased 2923 North Ave., where it will move its headquarters and custom-printed athletic gear shop. And Manchu, which serves up a mix of soul food and Vietnamese dishes, is preparing to fill a 1,200-square-foot storefront at 2914 North Ave.

With new breweries, tech company offices, restaurants and apartments, Scott’s Addition retained its title as the hottest neighborhood in Richmond for development. 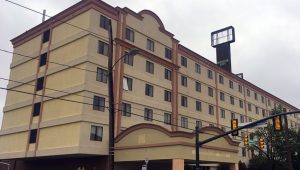 One of the most watched properties during the year was the former Quality Inn & Suites at 3200 W. Broad St. It ultimately sold just before year’s end to developers Louis Salomonsky and David White, who run Shockoe Bottom-based Historic Housing. After paying nearly $8 million for the site, the duo is planning a $70 million redevelopment that includes 322 primarily market-rate apartments, commercial space and a parking deck.

Over on West Marshall Street, a group led by Geoff Shudtz of Richmond-based Dodson Commercial, along with Fountainhead Properties’ Tom Papa, is developing The Nest – a six-story, 118-unit apartment project. It will rise on about 0.6 acres at 3105, 3107, 3113 and 3115 W. Marshall St.

Some of the year’s biggest deals were industrial plays across the metro region, but Chesterfield County was by far the biggest beneficiary. 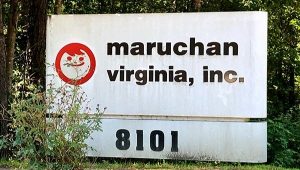 Ramen noodle maker Maruchan Virginia Inc. submitted an application in August to expand its factory at 8101 Whitepine Road in the county’s Airport Industrial Park by about 30,000 square feet.

Bissell, a Michigan-based vacuum cleaner maker, acquired about 40 acres at 1200 Battery Brooke Parkway in the James River Industrial Center, a parcel that once was slated to be part of the planned 650-acre Shandong Tranlin Paper Co. factory. Bissell is planning a 611,500-square-foot industrial complex to be built in phases.

Back in the city, Pennsylvania-based industrial company Kinsley announced plans to establish a steel fabrication plant in the former 27-acre Williams Bridge Co. complex at 700 E. Fourth St. and 1500 Goodes St. at the eastern edge of Manchester.

Catch up on more deals

With too much to fit onto this page, follow this link to scroll through all of this year’s commercial real estate news.