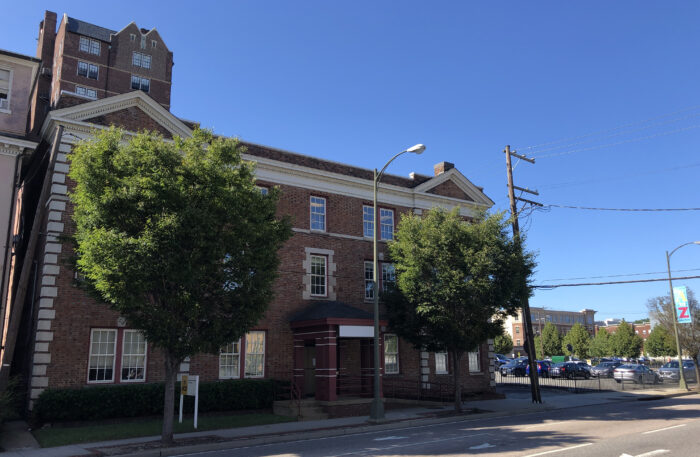 This building at 104 N. Belvidere St., along with an adjacent parking lot to the north, are both currently used by VCU. A university foundation purchased the properties for $5 million. (Mike Platania photo)

While its athletics department has been busy piecing together land near The Diamond, VCU has snapped up some additional real estate near Monroe Park.

The parcels total about one-quarter of an acre and were assessed by the city this year at a combined $1.61 million. VCU’s acquisition closed Aug. 18, city records show.

While the sellers, Hamid and Ali Gharagozloo, had the property rezoned in 2018 to allow for a mix of uses, VCU spokesman Mike Porter said in an email Thursday there are no changes proposed for the property.

The university’s master plan, adopted in 2019, doesn’t outline any new projects for the North Belvidere land. To help to enact the master plan, VCU recently adopted a budget of $1.2 billion for construction projects from 2022 to 2028.

For much of the past year, VCU has been focused on the area surrounding The Diamond, where the university is planning an athletics village.

Last year it bought the Greyhound Maintenance station and Salvation Army properties along Hermitage Road for a total of $16.2 million, then this spring it bought a smaller parcel at 2700 Hardy St. where James River Distillery operates for $183,000.

The university had been busier near its Monroe Park campus three to four years ago.

In the span of a few months of 2018, it purchased a half-acre site at the intersection of North Belvidere and West Grace streets for nearly $4 million, as well as the former The Mansion 534 building on North Harrison Street for $3.5 million. A year prior, VCU bought the old New York Fried Chicken building at 501 W. Broad St. for just under $3 million.

VCU Is growing like the Holy Roman Empire! From the look of things this is very good for the City and the region. There is the other side of the coin though when private tax-paying properties are removed from the city’s tax roles. It’s a good thing that the new assessments will add $43 Million in new taxes in 2022. Perhaps VCU’s growth is contributing to that side of the coin.

Bruce, Good point. We always lament that property is being taken off the tax rolls, but unquestionably VCU’s massive investments in the city over the past two decades has been a driving factor in improving the overall quality of life in the city, and yes, raising assessments in the meantime. My only regret is that we have a local government that rubber stamps a “tax increase” every year, instead of lowering the tax rate to compensate for the increased assessment, as they are supposed to by law. I guess you can blame complacent citizens as well, who go along without… Read more »

So basically, the citizens are footing the tax bill for VCU when they buy up private property. The state, including VCU, already owns so much of the city real estate. Every time a private parcel is gobbled up by the state, the taxpayers have to cover the loss revenue. I better idea would be to tax the VCU real estate that is used to generate revenue, ie. anything that sells tickets to attend. If they can make money then they sure can pay the real estate tax. This will be especially true for their new sports village.

The property was acquired by the VCU Real Estate Foundation which is not a state agency and does pay taxes. The tax revenue to the city from this property will not change.

If the foundations non profit, which I am sure it is, then it too would not pay any real estate tax just like a church or private school. Thus the city would be deprived of the taxes.

Thanks for that correction. I should have known better. Although John has a point. It’s time for the City to lower its tax rate. Mayor Stoney wants to raise it 8 cents!

Good to see all these properties taken off the tax rolls. I assume it is time to raise the meals tax again?

To quote a friend: Monroe Park is not a VCU campus. It is a city park taken over by VCU.