In the changing downtown shopping and dining scene, the property’s broker says she’s looking for another retailer or restaurant to fill the space after a 50-year-old uniform shop moves to the West End.

A Chesterfield construction company is building itself a new home near Petersburg.

In the latest of many recent local hotel sales, two Richmond Hyatts will change ownership later this fall as part of a $580 million nationwide deal.

Jefferson’s plan to flee the country did not weigh heavily into the judge’s sentencing decision, reasoning that most white-collar criminals with the means to skip town instead of pleading guilty probably consider the idea.

The judge was more upset with Jefferson’s spending of millions of dollars that could have been used for restitution.

Seeing a bigger market for affordable housing than commercial space, the development firm wants to double the number of planned apartments in the final piece of a Petersburg complex.

The imprisoned local developer is set to begin his sentence on Tuesday, and he’ll have a new bride waiting for him on the outside.

With less than a week before the sentencing hearing, developer Billy Jefferson’s attorneys are making a case for a 12-year sentence, citing accountability and contributions to the community, “fraud notwithstanding.” 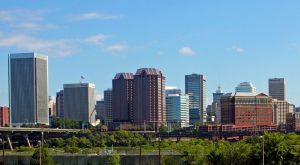